This theory was given by Ernest Burgess in 1925.

This theory was given by Ernest Burgess in 1925. He envisaged that the development of a city outwards from a centre in concentric zones in a ripple-like fashion. He made the following assumptions: 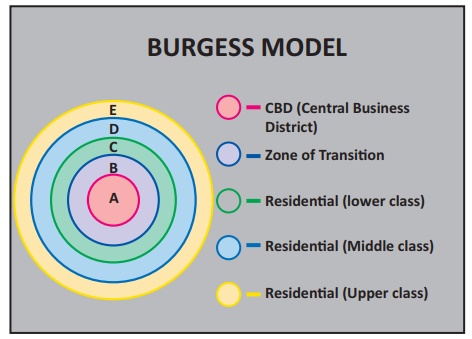 A. The city grows outwards in the form of five concentric zones or rings as long as there are no physical barriers, such as rivers or hills to distort the pattern.

B. The city has a single centre.

C. Growth is accomplished by a simple extension of each zone outwards into the next zone.

The characteristic features of each of the five zones can be described as follows.

It is the heart of the urban community where the commercial, social and civic activities are concentrated. The heart of the C.B.D. or the downtown core has office buildings, departmental stores, theatres, hotels, banks and civic government buildings, while outside this core are warehouses and light industry.

Zone B: The transition zone next to the C.B.D

It is the transition zone where the central business activities and factories mix and invade an area of aging residential dwellings. This is also the zone of residential decay where the new migrants come and live because the rents are low and transportation costs to the workplace are minimal. Thus, these are the sites of urban slums.

This zone is inhabited by the blue-collar workers who are generally the second generation migrants. These people have the capacity to own their individual houses away from the C.B.D., but still live within easy access of their workplace. Here, the family groups are more stable and crime rates are lower.

The next concentric zone has middle and upper class residences which are approximately 15 to 20 minutes by public transport from zone 1.

This outer zone encircles the city and lies beyond the continuous built-up areas. Much of this zone is still an open space and is often located beyond the city limits. Here, small villages, surrounded by open country, gradually become suburbs. Since people in this zone work in the C.B.D., the commuter zone is located within one hour’s travelling time from the centre of the city.

Burgess stressed that the outward growth of the city implies that each zone is not static. Business activities expand into the transition zone which forces low income groups to move outwards. This group, then, displaces the middle class and the wealthy that, in turn, are forced to move outwards.