• To understand the meaning of disaster.

• To know about the types of disasters.

• To know a few key concepts in Disaster Management and orient them to the words used in media.

• To understand Tsunami and flood.

This lesson explains about the various natural disasters and man-made disasters. It also deals with the precautionary and mitigation measures taken to avoid the loss of lives and materials.

Disaster is a very common phenomenon in the human society. It has been experienced by people since time immemorial. Though its form may be varied, it has been a challenge for society. The latest development which has been discovered in the World Disaster Reports recently is that, the disasters have increased in frequency and intensity. India is one of the most disaster prone countries in the world. It has some of the world’s most severe droughts, famines, cyclones, earthquakes, chemical disasters, rail accidents and road accidents. The high density of population in the developing countries, especially in the high risk coastal areas, results in millions of people getting affected by natural disasters, especially in recurring disasters like floods, cyclones, storm surges, etc.

‘A disaster is a serious disruption of the functioning of a society involving human and material loss. Disaster is broadly classified into natural and man-made disasters. 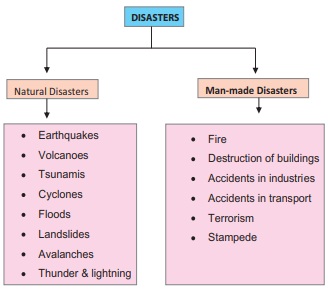 Volcanoes are openings or vents where lava, small rocks and steam erupt onto the earth’s surface.

A low pressure area which is encircled by high-pressure wind is called a cyclone.

An overflow of a large amount of water, beyond its normal limits, especially on the rainfed areas is called a flood.

The movement of a mass of rocks, debris, soil etc., downslope is called a landslide.

A large amount of ice, snow and rock falling quickly down the side of a mountain is called an Avalanche.

Thunder is a series of sudden electrical discharge resulting from atmospheric conditions. This discharge results in sudden flashes of light and trembling sound waves which are commonly known as thunder and lightning.

Massive forest fires may start in hot and dry weather as a result of lightning, and human carelessness or from other causal factors.

Demolition of buildings by human activites.

The social unrest or differences in principles leads to terrorism.

The term stampede is a sudden rush of a crowd of people, usually resulting in injuries and death from suffocation and trampling.

A killer Tsunami hit the south east Asian countries on the 26th of December, 2004. A massive earthquake with a magnitude of 9.1 -9.3 in the Richter scale epicentre in the Indonesian island of Sumatra. It triggered one of the biggest Tsunamis the world had ever witnessed. The massive waves measuring up to 30 metres that killed more than 2,00,000 people of Asia. 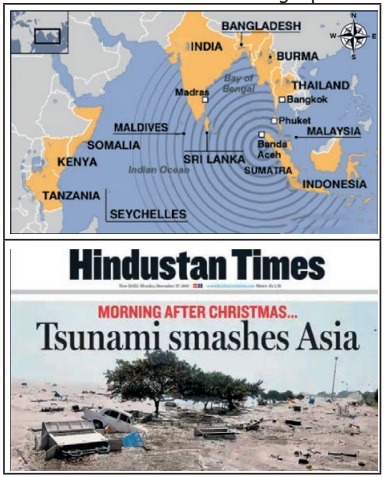 In India, over 10,000 people were killed by this disaster. Tamil Nadu alone accounted for 1,705 deaths. All the coastal districts were affected, Nagapattinam was the worst hit in the state of Tamil Nadu. Fishermen, tourists, morning walkers, children playing in beach and people living on the coast were unprepared for the waves. So they lost their life and the most of the loss of lives and damage to property was within 500 metres of the shore. After that the Indian government set up a Tsunami Early Warning System at Indian National Centre for Ocean Information Services (INCOIS), Hyderabad in 2007.

• You should find out if your home, school etc., are in valunarable areas along sea shore.

• Know the height of your street above sea level.

• If you see the sea water receding, you must immediately leave the beach and go to higher ground far away from the beach.

• Don't go to the coast to watch the Tsunami.

• Be aware facts about tsunami.

Floods are high stream flows, which overlap natural or artificial banks of a river or a stream and are markedly higher than the usual flow as well as inundation of low land.

Flash floods: Such floods that occur within six hours during heavy rainfall.

River floods: Such floods are caused by Precipitation over large catchment areas or by melting of snow or sometimes both.

• Inefficient engineering design in the construction of embankments, dams and canals.

• Loss of agricultural land and cattle

• Loss of life and spread of contagious diseases.

• To find out if the settlement area is to be affected by flood or not.

• To dig canals from the farm land, to drain the excessive water keeping sand bags etc.,

• Try to connect electricity once it is cut.

• Cut off gas connection and electricity.

• Leave immediately through the known passage or prescribed passage

• Use bleaching powder to keep your environment hygienic.

• Before using match sticks and candles, ensure that there is no gas leakage.

• Don’t eat more food when you are affected by diarrhoea.

• Don’t try to take anything that floats in flood.

Disaster Risk Reduction: The practice of reducing disaster risks through systematic efforts to analyze and manage the causal factors of disasters. There are four key approaches to public awareness for disaster risk reduction. Campaigns, participatory learning, informal education, and formal school based interventions. 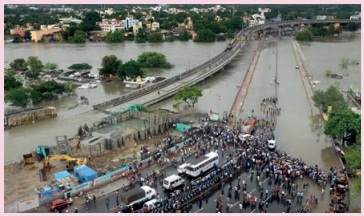 Chennai is one of the largest metropolitan cities in India, which lies on the south eastern coast. The north east monsoon along with tropical cyclone hits Chennai every year and gives heavy cyclonic rainfall. In 2015, November and December due to heavy rain, the devastating floods that hit Chennai and other parts of Tamil Nadu claimed more than 400 lives and caused enormous economic damage. The Government of India and Tamil Nadu have taken a lot of action to reduce loss of life and minimize human sufferings.

1. Mitigation: The lessening of the adverse impacts of hazards and related disasters.

2. Forecast: Definite statement or statistical estimate of the likely occurrence of a future event or conditions for a specific area.

4. Magnitude: A measure of the amount of energy released by an earthquake.

6. Catchment: The action of collecting water, especially the collection of rainfall over a natural drainage area.

Through this activity you will know about prevention activities before cyclone through a game.

Step -1 Use the URL or scan the QR code to open the “storm safe” game page.

Step -2 Click the “play” icon to enter the game page

Step -4 Drag and put weightless things in the house.