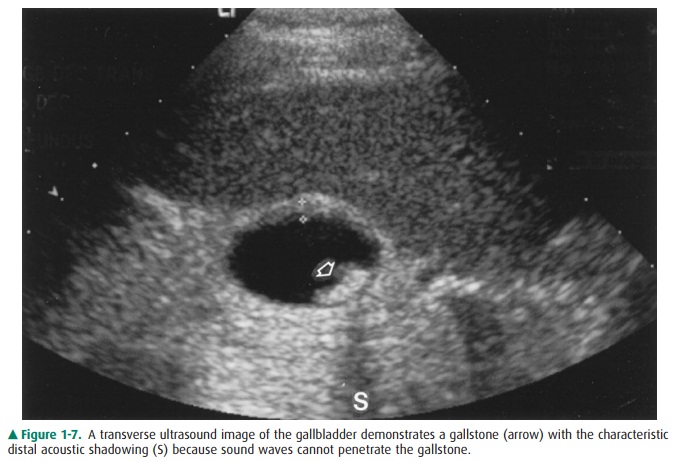 Diagnostic ultrasound is a noninvasive imaging technique that uses high-frequency sound waves greater than 20 kilo-hertz (kHz). A device known as a transducer is used to emit and to receive sound waves from various tissues in the body. 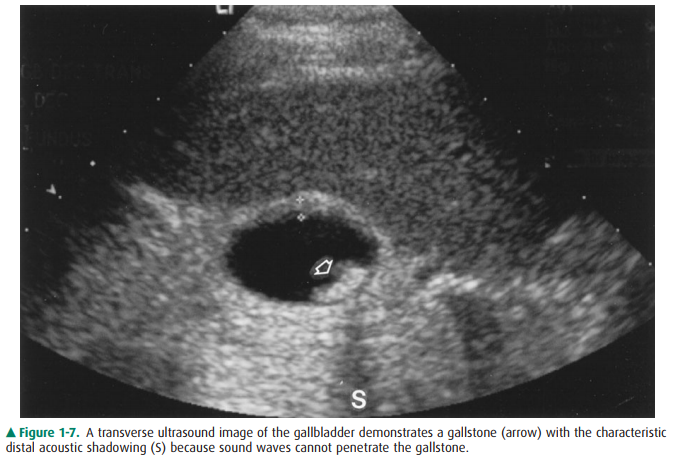 Figure 1-7. A transverse ultrasound image of the gallbladder demonstrates a gallstone (arrow) with the characteristic distal acoustic shadowing (S) because sound waves cannot penetrate the gallstone.

The transducer is placed against the patient’s skin with a thin layer of coupling gel. This gel displaces the air that would oth-erwise reflect virtually the entire incident ultrasound beam. As sound travels into the patient, wave fronts spread out, di-minishing the overall beam intensity. Beam attenuation also occurs secondary to partial tissue absorption with associated heat conversion. At tissue interfaces, the beam is partially re-flected and transmitted. The reflected sound waves, or echoes, travel back to the transducer and are converted into electric signals and amplified. The amplitude of the returning wave partially depends on the degree of beam absorption. A shade of gray is then assigned to each amplitude, with strong echoes being typically assigned a shade near the white end of the spectrum, and weak echoes assigned a shade near the black end of the spectrum. In addition, the depth of the reflecting tissue can be calculated from the known total beam travel time and the average sound velocity in human tissue (1,540 m/s). Limitations of this modality are primarily operator-dependent in nature. Additional limitations include variable visualiza-tion of midline abdominal organs (pancreas) and vasculature when obscured by overlying bowel gas, as well as inability of sound waves to penetrate gas or bone.

Doppler ultrasound is used primarily to evaluate vascular flow by detecting frequency shifts in the reflected beam, uti-lizing a principle termed the Doppler effect. This effect occurs when a sound emitter or reflector is moving relative to the stationary receiver of sound. Objects moving toward the de-tector appear to have a higher frequency and shorter wave-length, whereas objects moving away from the detector appear to have a lower frequency and longer wavelength. If the ultrasound beam strikes a reflector moving toward it, the reflected sound will have a higher frequency than the original beam. Alternatively, if the ultrasound beam strikes a reflectormoving away from it, the reflected sound will have a lower fre-quency than the original beam. The Doppler shift is the fre-quency difference between the original beam frequency and the reflected beam frequency. Frequency differences are used to calculate the corresponding flow velocities, from which a Doppler waveform, or tracing, can be generated. This tracing depicts the relationship between velocity and time and is unique to the flow pattern within the vessel. Color flow Doppler assigns colors (blue and red) to structures according to their motion toward or away from transducers. This information can be superimposed on a gray-scale image. Endoluminal sonography uses a high-frequency catheter-based transducer (9 to 20 megahertz [MHz]) to image structures beyond the lumen of the hollow viscus. It is accurate in local staging of cancer and in detecting small lesions that may not be visualized with other imaging modalities. Limitations for optimal evalu-ation include inability to precisely position the transducer within an area of interest that may restrict full entry.

Diverse applications of ultrasonography are presented as follows. Gastrointestinal (GI) applications of endoluminal sonography include quantification of the size and wall thick-ness of esophageal carcinoma or to detect and characterize esophageal varices. Transrectal ultrasound is performed to evaluate the prostate gland. Transesophageal echocardiogra-phy is used for evaluating cardiovascular abnormalities. Gen-itourinary (GU) applications include guidance of collagen injections, examination of the severity and length of ureteral strictures, diagnosis of upper-tract neoplasms and urethral diverticula, identification of submucosal calculi, and visuali-zation of crossing vessels prior to endopyelotomy. Evaluation of the uterus, adnexa, and fetus can be conducted using a transvaginal probe in the presence of an empty bladder. Sonohysterography, an ultrasound-guided procedure, re-quires instillation of a sterile saline solution into the uterine cavity following cannulation for evaluation of endometrial masses or other abnormalities. More recently, intravascular application of sonography has been promising for quantitat-ing the degree of arterial stenosis, and for monitoring the therapeutic effects of angioplasty in both peripheral and coronary arteries. Intravascular ultrasound (IVUS) has been applied to modeling plaque morphology, blood flow, and the geometry of the vessel lumen. Three-dimensional ultrasound (3D-US) has been developed with advancements in com-puter processing power and has rapidly achieved widespread use for some clinical applications, including the evaluation of normal embryonic and/or fetal development, as well as car-diac morphology in specific congenital anomalies.