In 1952, Felix Bloch and Edward Purcell were awarded the Nobel Prize for their independent discovery of the magnetic resonance phenomenon in 1946. Between 1950 and 1970, nuclear magnetic resonance (NMR) was developed and used for chemical and physical molecular analysis.

In 1952, Felix Bloch and Edward Purcell were awarded the Nobel Prize for their independent discovery of the magnetic resonance phenomenon in 1946. Between 1950 and 1970, nuclear magnetic resonance (NMR) was developed and used for chemical and physical molecular analysis. In 1971, Raymond Damadian demonstrated that NMR had utility in cancer di-agnosis, based on prolonged relaxation times in pathologic tissue. The first 2D proton NMR image of a water sample was generated in 1972 by Paul Lauterbur using a back-projection technique, similar to that used in CT. In 1975, Richard Ernst used phase and frequency encoding, as well as Fourier trans-form analysis, to form the basis of current magnetic resonance imaging (MRI) techniques. All of these experiments used de-fined, nonuniform magnetic fields or linear variations in field strength along all coordinate axes. The application of these nonuniform fields (magnetic field gradients) permitted dis-crimination of various signals from different spatial loca-tions. In MR imaging, a pulsed radiofrequency (rf) beam is used in the presence of a strong main magnetic field to gen-erate high-quality images of the body. These images can be acquired in virtually any plane, although sagittal, coronal, and axial images are commonly obtained.

Although a detailed explanation is beyond the scope of this topic, substances (eg, fluid) that have a long Tl will appear dark on Tl-weighted images, whereas those with short Tl (fat) will display high signal intensity. On T2-weighted images, a long-T2 substance (fluid) will appear bright. Advantages of MR imaging include superb contrast resolution, high spatial resolution, and lack of ionizing radiation.

The most commonly used clinically approved contrast agents for MR imaging are gadolinium-based compounds that produce T1 shortening. Tissue relaxation results from interactions between the unpaired electron of gadolinium and tissue hydrogen protons, which significantly decrease the T1 of the blood relative to the surrounding tissues. Adverse reactions to this agent are far less frequent than those seen with iodinated compounds, with common reactions includ-ing nausea, vomiting, headache, paresthesias, or dizziness.

Hydrogen nuclei are favored for MR imaging. On place-ment of a patient in an MR scanner, the randomly oriented hydrogen nuclei align with the static magnetic field. In order to detect a signal, a perturbing rf pulse is transiently applied to the patient, resulting in a net change in alignment of these nu-clei. When the rf pulse is turned off, the spins return to their equilibrium state by dissipating energy to the surrounding molecules. The rate of energy loss is mediated by the intrinsic relaxation properties of the tissue, designated as the longitudi-nal (T1) and transverse (T2) relaxation times. T1 represents the restoration of the longitudinal magnetization along the axis of the main magnetic field, whereas T2 represents the decay time of the magnetization in the transverse plane.

Fast spin echo, fast gradient echo, diffusion imaging, per-fusion imaging, and echo planar imaging (EPI) are examples of fast imaging techniques that can be performed on clinical scanners. Diffusion-weighted imaging is exquisitely sensitive to the microscopic molecular motion of water, demonstrating areas of limited (restricted) intracellular diffusion following an acute ischemic event. This sequence is utilized routinely in clinical neuroimaging protocols but is somewhat nonspecific for pathology, as diffusion changes that are characteristic of acute ischemia can be observed with infection and some tumors. Perfusion-weighted MRI, a less frequently used tech-nique, provides information about the blood supply to a par-ticular area of the brain following rapid bolus injection of gadolinium-based contrast agent. Echo planar imaging allows the collection of all data required for image reconstruction in a fraction of a second, after a single rf pulse. This technology has resulted in significant clinical and scientific advances, such as in stroke evaluation and functional brain imaging, re-spectively. Functional MRI studies of the human brain using EPI techniques have allowed physiological investigations of the functional organization of the brain.

MR angiography includes contrast-enhanced MR an-giography and non-contrast-enhanced MR angiography. Three-dimensional contrast-enhanced magnetic resonance angiography (MRA) is used for noninvasive assessment of many vascular abnormalities, including aneurysms, dissec-tion, vessel anomalies, and coarctation. It has evolved from the use of fast scanning techniques on high-gradient-strength units, in combination with contrast. Using this technique, volumetric acquisitions can be performed in a single breath hold. Improvements in contrast resolution are achieved, regardless of the plane of acquisition. This has allowed reductions in the number of image sections needed to display a large vascular territory, as well as over-all imaging acquisition times. Multiphase dynamic imaging is usually performed after intravenous gadolinium admin-istration, with the arteries best seen during the early phase and veins during the later phases. Noncontrast MRA methods, such as 3D time-of-flight (TOF) MR, is used to evaluate intracranial arterial (Figure 1-8) and carotid arteries. In addition, 2D TOF MR imaging is used to evaluate periph-eral vascular diseases. 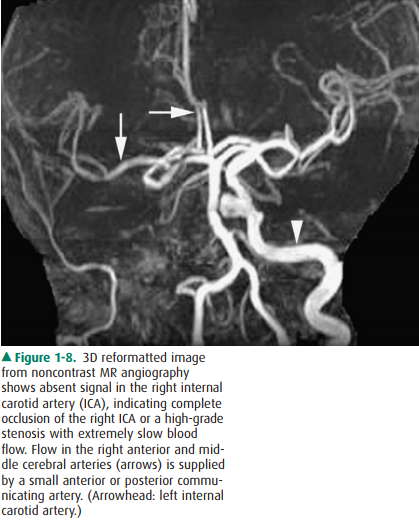 MRI has traditionally been used for neurologic indications, including brain tumors (Figure 1-9), acute ischemia, infec-tion, and congenital abnormalities. MRI has been used for a number of nonneurologic indications, namely, spine, muscu-loskeletal (MSK), cardiac, hepatic, biliary, pancreatic, adre-nal, renal, breast, and female pelvic imaging. Spine MR studies are useful for evaluating degenerative changes, disk herniation, infection, metastatic disease, and congenital ab-normalities. Common MSK applications involve imaging of large joints, such as knee, shoulder, and hip. The primary common indication for MRI of the knee is the assessment of menisci and ligaments following internal derangement. Rotator cuff tear is a typical shoulder indication. Cardiac studies are performed to identify complex malformations, cardiac func-tion, myocardiac viability, valvular disease, myocardial perfu-sion, and congenital heart disease. In the abdomen, hepatic MRI studies are often used to diagnose atypical presentations of liver lesions, metastatic disease, and hepatocellular carci-noma. Adrenal studies are performed primarily to distin-guish adrenal adenomas from metastatic disease. Atypical renal masses, found incidentally on US or CT, can often be better characterized on MRI. In addition, renal MRI is used to establish the presence and extent of tumor thrombus in cases of renal-cell carcinoma for tumor staging purposes. Breast MRI is utilized to stage cancer, to screen patients at high risk, to look for unknown primary cancer in patients with positive axillary nodes, for delineation of residual cancer after chemotherapy, and sometimes for patients with equivo-cal mammographic and/or US findings. Finally, oncologic applications in the female pelvis include the diagnosis and characterization of cervical and endometrial carcinomas, as well as adnexal lesions. MR enterography is used in the eval-uation of small-bowel disease (Figure 1-10). 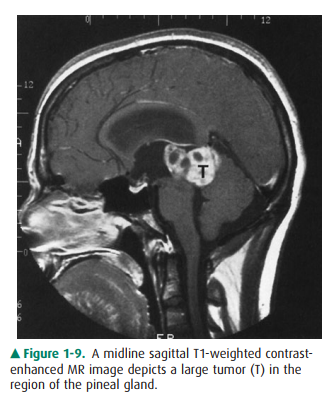 Figure 1-9. enhanced MR region of the A midline sagittal T1-weighted contrast-image depicts a large tumor (T) in the pineal gland. 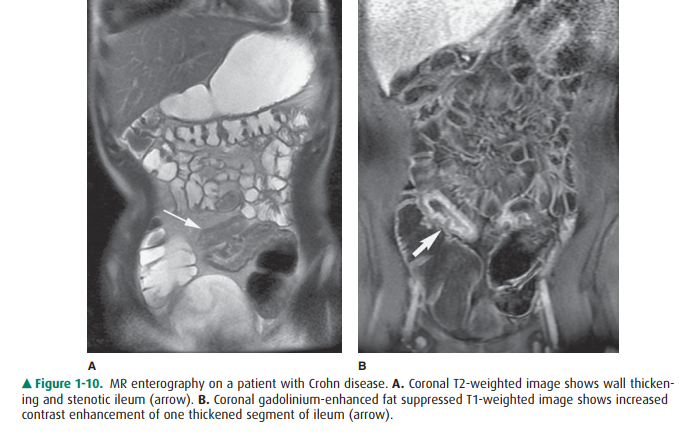 Magnetic resonance cholangiopancreatography (MRCP) is used to evaluate choledocholithiasis, retained gallstones, pancreatobiliary neoplasms, strictures, primary sclerosing cholangitis, and chronic pancreatitis (Figure 1-11). This non-contrast technique relies on the relatively stationary nature of bile (compared with blood) to depict the predominantly fluid-filled pancreatic ducts and biliary tree. Rapid heavily T2-weighted breath-hold sequences are utilized, resulting in visualization of high signal-intensity ductal structures. In pa-tients who have failed endoscopic retrograde cholangiopan-creatography (ERCP), or who are unable to tolerate this procedure, MRCP has become a suitable alternative. MRCP is particularly useful in postoperative patients, patients with biliary system anomalies, and as a screening tool in patients with an otherwise low probability of a biliary abnormality. ERCP is generally reserved for therapeutic purposes, such as stent placement, stone extraction, or stricture dilatation. 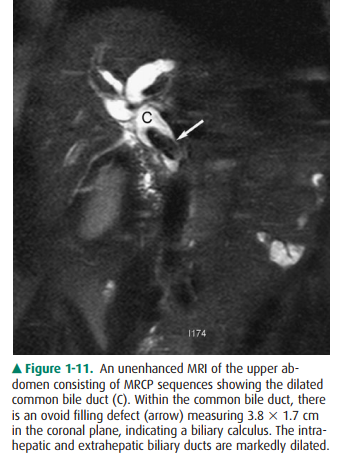 Since 2006, it has been reported that the administration of gadolinium-based contrast agents for MR imaging is associ- ated with the development of nephrogenic systemic fibrosis (NSF) in some patients with renal insufficiency. Although NSF was first reported in 1997, the exact cause of develop-ment of NSF remains unknown. The dissociation of gadolin-ium ion from the chelating ligand recently has been proposed as an etiologic factor in the development of NSF. The inci-dent of NSF ranges from 0.003% to 0.039% depending on the report cited. The incidence of NSF may increase to 1% to 7% in patients with severe chronic kidney disease following ex-posure to gadolinium-based contrast media. All patients in published case reports developed NSF within 6 months fol-lowing administration of gadolinium-based contrast agent. The majority of patients with renal insufficiency in these published reports, however, did not develop NSF following administration of gadolinium chelates. The development of NSF following the administration of a gadolinium chelate contrast has been reported to be particularly associated with patients who have acute or chronic renal disease with a glomerular filtration rate (GFR) lower than 30 mL/min/ 1.73 m2, and in those with acute renal insufficiency. The esti-mated GFR was calculated by using the patient’s age, weight, and race and serum creatinine level. Some risk factors, such as concurrent proinflammatory conditions, metabolic con-ditions including acidosis and high calcium-phosphate products, or concurrent tissue injury, surgery, and is-chemia, are associated with the development of NSF in pa-tients who underwent gadolinium-based contrast MR imaging.

In 2007, the US Food and Drug Administration (FDA) re-quested that a warning be added to all five FDA-approved gadolinium-based contrast agents regarding the potential risk of NSF in patients with renal failure. These five FDA-ap-proved products include gadodiamide (Omniscan, GE Healthcare, Oslo, Norway), gadopentetate dimeglumine (Magnevist, Bayer Healthcare, Wayne, NJ), gadobenate dimeglumine (MultiHance, Bracco Diagnostics, Princeton, NJ), gadoteridol (ProHance, Bracco Diagnostics, Princeton, NJ), and gadoversetamide (OptiMARK, Tyco-Mallinckrodt, St Louis, MO). One recent recommendation aimed at de-creasing the risk of NSF has been to use 0.1 mmol/kg of gadolinium contrast for patients with GFR lower than 30 mL/min. If a patient is in a dialysis program, some experts believe that it may be prudent to dialyze after administration of gadolinium-based contrast agent. Alternative imaging ex-aminations, such as arterial spin-labeling perfusion MRI, may replace administration of gadolinium for some.

MR imaging is contraindicated for patients with metal implants or foreign bodies, such as intracranial aneurysm clips, intraorbital metallic foci, cardiac pacemakers, or spe-cific types of cardiac valves. In these instances, these objects may be dislodged or damaged by the magnetic field. MR im-aging may also be contraindicated for claustrophobic or un-cooperative patients who may not respond to conscious sedation protocols.