Some hazards occur frequently and threat the people. Hazards are classified in different ways.

I. Based on their causes of occurrence.

II. Based on their origin.

I. Based on their causes of occurrence

Hazards can be broadly classified into three types: natural, human-made and socio-natural hazards.

1. Natural hazards: These are the results of natural processes and man has no role to play in such hazards. The main examples of natural hazards are earthquakes, floods, cyclonic storms, droughts, landslides, tsunamis and volcanic eruptions. 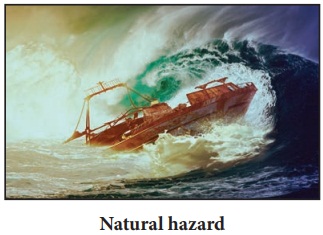 2. Human-made hazards: these are caused by undesirable activities of human. It can be the result of an accident, such as an industrial chemical leak or oil spill, or an intentional act. Such hazards can disturb the safety, health, welfare of people and cause damage or destruction to property. The following are the examples of human-made hazards. They are explosions, hazardous wastes, pollution of air, water and land, dam failures, wars or civil conflicts and terrorism. 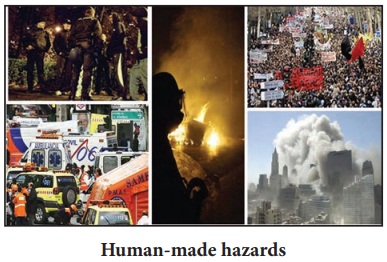 3. Socio-natural hazards (Quasi-natural hazards): these are caused by the combined effect of natural forces and misdeeds of human. Some of the examples are:

* The frequency and intensity of floods and droughts may increase due to indiscriminate felling of trees, particularly in the catchment areas of the rivers.

* Landslides are caused by natural forces and their frequency, and impact may be aggravated as a result of construction of roads, houses etc., in mountainous areas, excavating tunnels and by mining and quarrying.

* Storm surge hazards may be worsened by the destruction of mangroves.

* Smog is a serious problem in most big urban areas. The emissions from vehicles and industries,combustion of wood and coal together combined with fog leads to smog.

II. Based on their origin

Hazards can be grouped into eight categories