Earthquake is a violent tremor in the earth’s crust, sending out a series of shock waves in all directions from its place of origin.

Earthquake prone regions of the country have been identified on the basis of scientific inputs relating to seismicity, earthquakes occurred in the past and tectonic setup of the region. Based on these inputs, Bureau of Indian Standards has grouped the country into four seismic zones: Zone II, Zone III, Zone IV and Zone V (No area of India is classified as Zone I). 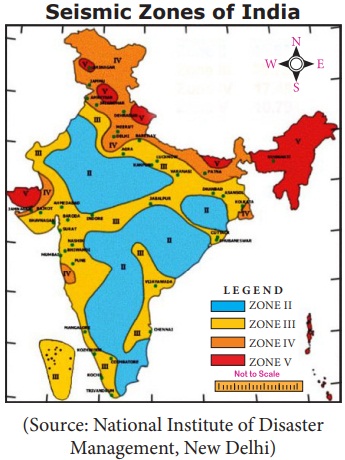 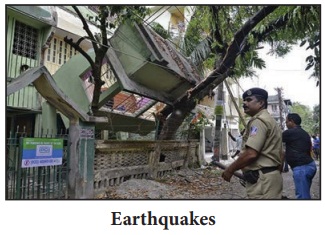 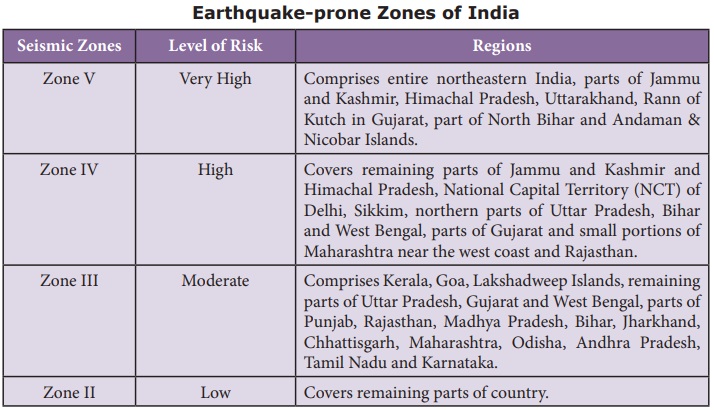 Flood is an event in which a part of the earth’s surface gets inundated. Heavy rainfall and large waves in seas are the common causes of flood. 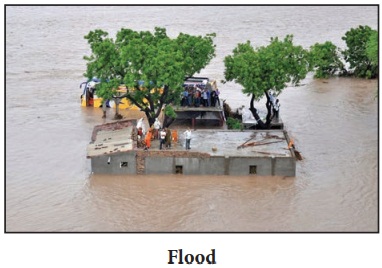 The major causes of floods are:

ACTIVITY : Discuss in the classroom about the actions to be taken before, during and after flood. 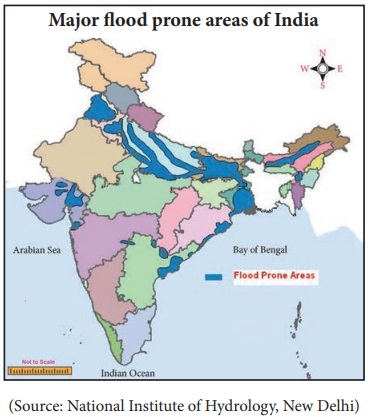 A cyclonic storm is a strong wind circulating around a low pressure area in the atmosphere. It rotates in anti-clockwise direction in Northern Hemisphere and clockwise in the Southern Hemisphere.

Tropical cyclones are characterised by destructive winds, storm surges and exceptional levels of rainfall, which may cause flooding. Wind speed may reach upto 200 km/h and rainfall may record upto 50 cm/day for several consecutive days.

A sudden rise of seawater due to tropical cyclone is called storm surge. It is more common in the regions of shallow coastal water.

The west coast of India is less vulnerable to storm surges than the east coast.

1. Maharashtra coast, north of Harnai and adjoining south Gujarat coast and the coastal belt around the Gulf of Cambay. 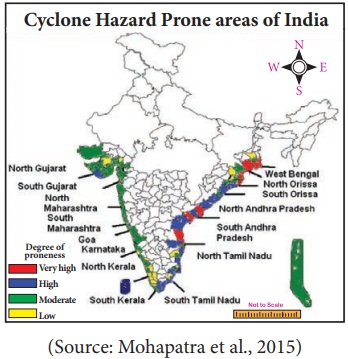 Any lack of water to satisfy the normal needs of agriculture, livestock, industry or human population may be termed as a drought. Further, the drought could be classified into three major types as,

i. Meteorological drought: it is a situation where there is a reduction in rainfall for a specific period below a specific level.

ii. Hydrological drought: it is associated with reduction of water in streams, rivers and reservoirs. It is of two types, a) Surface water drought, and b) Groundwater drought.

iii. Agricultural drought: it refers to the condition in which the agricultural crops get affected due to lack of rainfall. 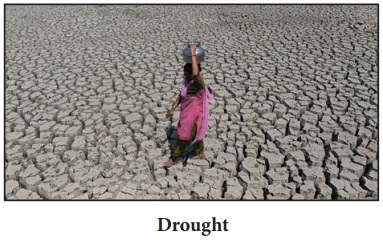 Droughts in India occur in the event of a failure of monsoon. Generally monsoon rainfall is uneven in India. Some areas receive heavy rainfall while other regions get moderate to low rainfall. The areas which experience low to very low rainfall are affected by drought.

About one third area of the country is affected by drought. It severely affects 16% of the land area and 12% of the total population of India. The areas that receive an annual rainfall of less than 60 cm are the drought prone regions of India. 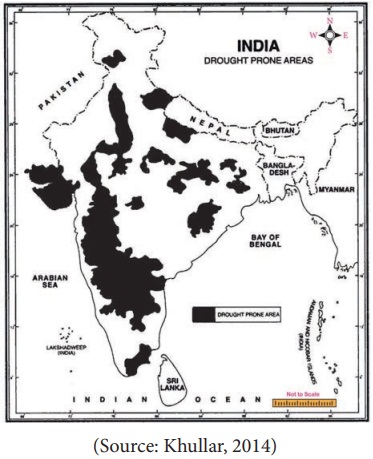 The major areas highly prone to drought are:

1. The arid and semi-arid region from Ahmedabad to Kanpur on one side and from Kanpur to Jalandhar on the other.

2. The dry region lying in the leeward side of the Western Ghats.

Landslide is a rapid downward movement of rock, soil and vegetation down the slope under the influence of gravity. Landslides are generally sudden and infrequent. Presence of steep slope and heavy rainfall are the major causes of landslides. Weak ground structure, deforestation, earthquakes, volcanic eruptions, mining, construction of roads and railways over the mountains are the other causes of landslides.

About 15% of India’s landmass is prone to landslide hazard. Landslides are very common along the steep slopes of the Himalayas, the Western Ghats and along the river valleys. In Tamil Nadu, Kodaikanal (Dindigul district) and Ooty (The Nilgiris district) are frequently affected by landslides.

Tsunami refers to huge ocean waves caused by an earthquake, landslide or volcanic eruption. It is generally noticed in the coastal regions and travel between 640 and 960 km/h. Tsunami pose serious danger to the inhabitants of the coastal areas.

v. Explosives: the wastes resulting from ordnance manufacturing and some industrial gases. 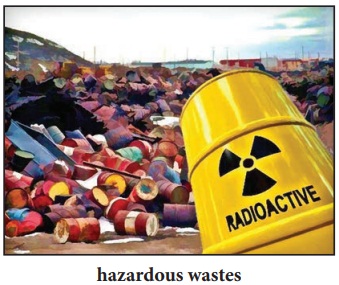 * The radiation emitted was more than 400 times than that released by the atomic bomb dropped on Hiroshima (Japan) in 1945. This accident remains the largest nuclear accident in history.

* More than 3,50,000 people were evacuated from the area and severe restrictions on permanent human settlement are still in that place.

* 33 years after the accident, the Exclusion Zone, which covers an area now in Ukraine and Belarus is inhabited by numerous animals and more than 200 bird species.

* In 2016, the Ukraine part of this zone was declared as a radiological and environmental biosphere reserve by the government.

Air is a mixture of several gases. The main gases are nitrogen (78.09%) for forming products such as, fertilisers for plants and for making the air inert, oxygen (20.95%) for breathing and carbon dioxide (0.03%) for photosynthesis. Some other gases like argon, neon, helium, krypton, hydrogen, ozone, zenon and methane are also present. Besides, water vapour and dust particles make their presence felt in one way or the other.

Air pollution is the contamination of the indoor or outdoor air by a range of gases and solids that modify its natural characteristics and percentage. Air pollutants can be categorised into primary and secondary pollutants.

i. Oxides of Sulphur

Water pollution may be defined as alteration in the physical, chemical and biological characteristics of water, which may cause harmful effects in human and aquatic life. 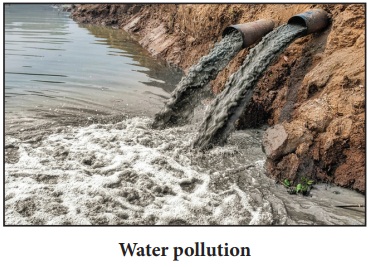 In India, water pollution has been taking place on a large scale and since a long period. Both surface and groundwater bodies are polluted to a great extent. The major causes of water pollution in India are: