A firewall may act as a packet filter. It can operate as a positive filter, allowing to pass only packets that meet specific criteria, or as a negative filter, rejecting any packet that meets certain criteria. Depending on the type of firewall, it may examine one or more protocol headers in each packet, the payload of each packet, or the pat- tern generated by a sequence of packets. In this section, we look at the principal types of firewalls.

A packet filtering firewall applies a set of rules to each incoming and outgoing IP packet and then forwards or discards the packet (Figure 22.1b). The firewall is typi- cally configured to filter packets going in both directions (from and to the internal network). Filtering rules are based on information contained in a network packet:

The packet filter is typically set up as a list of rules based on matches to fields in the IP or TCP header. If there is a match to one of the rules, that rule is invoked to determine whether to forward or discard the packet. If there is no match to any rule, then a default action is taken. Two default policies are possible:

The default discard policy is more conservative. Initially, everything is blocked, and services must be added on a case-by-case basis. This policy is more visible to users, who are more likely to see the firewall as a hindrance. However, this is the policy likely to be preferred by businesses and government organiza- tions. Further, visibility to users diminishes as rules are created. The default for- ward policy increases ease of use for end users but provides reduced security; the security administrator must, in essence, react to each new security threat as it becomes known. This policy may be used by generally more open organizations, such as universities.

Table 22.1, from [BELL94b], gives some examples of packet filtering rulesets. In each set, the rules are applied top to bottom. The “*” in a field is a    wildcard 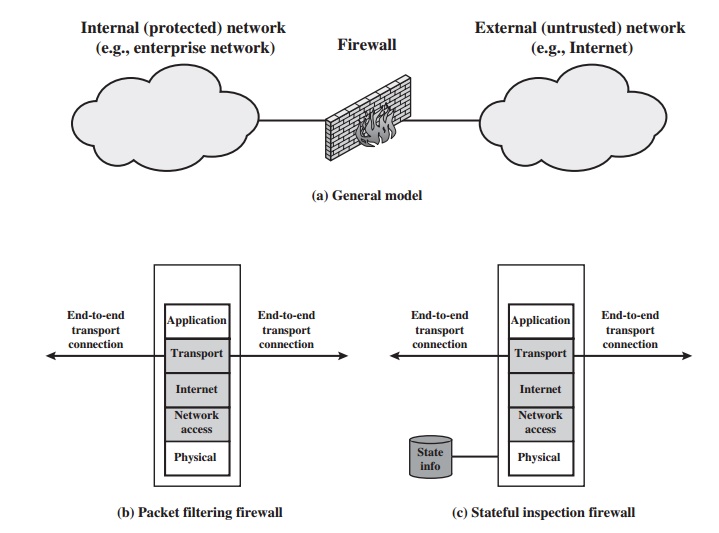 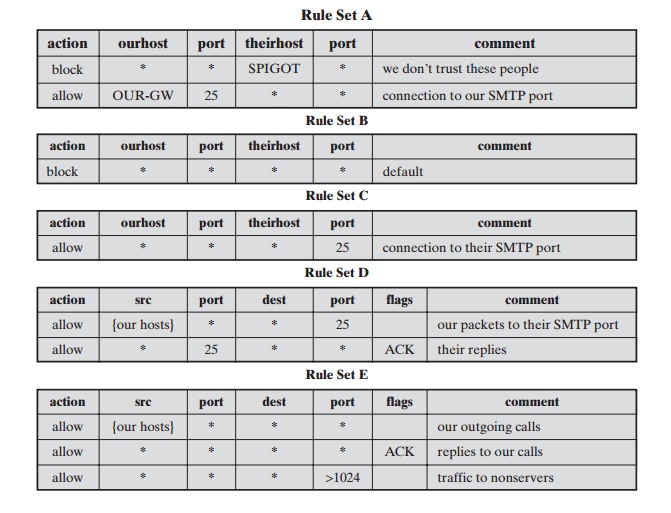 designator that matches everything. We assume that the default = discard policy is in force.

This ruleset achieves the intended result that was not achieved in C. The rules take advantage of a feature of TCP connections. Once a connection is set up, the ACK flag of a TCP segment is set to acknowledge segments sent from the other side. Thus, this ruleset states that it allows IP packets where the source IP address is one of a list of designated internal hosts and the destination TCP port number is 25. It also allows incoming packets with a source port number of 25 that include the ACK flag in the TCP segment. Note that we explicitly designate source and destination systems to define these rules explicitly.

This scheme requires that the systems be configured so that only the appropriate port numbers are in use.

Rule set E points out the difficulty in dealing with applications at the packet- filtering level. Another way to deal with FTP and similar applications is either state- ful packet filters or an application-level gateway, both described subsequently in this section.

One advantage of a packet filtering firewall is its simplicity. Also, packet filters typically are transparent to users and are very fast. [WACK02] lists the following weaknesses of packet filter firewalls:

•                           Most packet filter firewalls do not support advanced user authentication schemes. Once again, this limitation is mostly due to the lack of upper-layer functionality by the firewall.

Finally, due to the small number of variables used in access control decisions, packet filter firewalls are susceptible to security breaches caused by improper configurations. In other words, it is easy to accidentally configure a  packet filter firewall to allow traffic types, sources, and destinations that should be denied based on an organization’s information security policy.

Some of the attacks that can be made on packet filtering firewalls and the appropriate countermeasures are the following:

•                 IP address spoofing: The intruder transmits packets from the outside with a source IP address field containing an address of an internal host. The attacker hopes that the use of a spoofed address will allow penetration of systems that employ simple source address security, in which packets from specific trusted internal hosts are accepted. The countermeasure is to discard packets with an inside source address if the packet arrives on an external interface. In fact, this countermeasure is often implemented at the router external to the firewall.

•                 Source routing attacks: The source station specifies the route that a packet should take as it crosses the Internet, in the hopes that this will bypass security measures that do not analyze the source routing information. The counter- measure is to discard all packets that use this option.

A traditional packet filter makes filtering decisions on an individual packet basis and does not take into consideration any higher layer context. To understand what is meant by context and why a traditional packet filter is limited with regard to con- text, a little background is needed. Most standardized applications that run on top of TCP follow a client/server model. For example, for the Simple Mail Transfer Protocol (SMTP), e-mail is transmitted from a client system to a server system. The client system generates new e-mail messages, typically from user input. The server system accepts incoming e-mail messages and places them in the appropriate user mailboxes. SMTP operates by setting up a TCP connection between client and server, in which the TCP server port number, which identifies the SMTP server application, is 25. The TCP port number for the SMTP client is a number between 1024 and 65535 that is generated by the SMTP client.

In general, when an application that uses TCP creates a session with a remote host, it creates a TCP connection in which the TCP port number for the remote (server) application is a number less than 1024 and the TCP port number for the local (client) application is a number between 1024 and 65535. The numbers less than 1024 are the “well-known” port numbers and are assigned permanently to particular applications (e.g., 25 for server SMTP). The numbers between 1024 and 65535 are generated dynamically and have temporary significance only for the lifetime of a TCP connection.

A simple packet filtering firewall must permit inbound network traffic on all these high-numbered ports for TCP-based traffic to occur. This creates a vulnerabil- ity that can be exploited by unauthorized users.

A stateful inspection packet firewall tightens up the rules for TCP traffic by creating a directory of outbound TCP connections, as shown in Table 22.2. There is an entry for each currently established connection. The packet filter will now allow incoming traffic to high-numbered ports only for those packets that fit the profile of one of the entries in this directory.

A stateful packet inspection firewall reviews the same packet information as a packet filtering firewall, but also records information about TCP connections (Figure 22.1c). Some stateful firewalls also keep track of TCP sequence numbers to prevent attacks that depend on the sequence number, such as session hijacking. Some even inspect limited amounts of application data for some well-known protocols like FTP, IM and SIPS commands, in order to identify and track related connections. 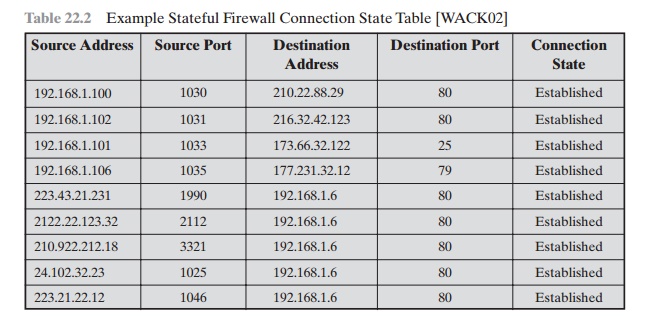 an application that the network administrator considers acceptable while denying all other features.

A prime disadvantage of this type of gateway is the additional processing overhead on each connection. In effect, there are two spliced connections between the end users, with the gateway at the splice point, and the gateway must examine and forward all traffic in both directions.

A fourth type of firewall is the circuit-level gateway or circuit-level proxy (Figure 22.1e). This can be a stand-alone system or it can be a specialized func- tion performed by an application-level gateway for certain applications. As with an application gateway, a circuit-level gateway does not permit an end-to-end TCP connection; rather, the gateway sets up two TCP connections, one between itself and a TCP user on an inner host and one between itself and a TCP user on an outside host. Once the two connections are established, the gateway typically relays TCP segments from one connection to the other without examining the contents. The security function consists of determining which connections will be allowed.

A typical use of circuit-level gateways is a situation in which the system admin- istrator trusts the internal users. The gateway can be configured to support applica- tion-level or proxy service on inbound connections and circuit-level functions for outbound connections. In this configuration, the gateway can incur the processing overhead of examining incoming application data for forbidden functions but does not incur that overhead on outgoing data.

An example of a circuit-level gateway implementation is the SOCKS package [KOBL92]; version 5 of SOCKS is specified in RFC 1928. The RFC defines SOCKS in the following fashion:

The protocol described here is designed to provide a framework for client-server applications in both the TCP and UDP domains to conveniently and securely use the services of a network firewall. The protocol is conceptually a “shim-layer” between the application layer and the transport layer, and as such does not provide network- layer gateway services, such as forwarding of ICMP messages.

SOCKS consists of the following components:

•                          SOCKS-ified versions of several standard client programs such as FTP and TELNET. The implementation of the SOCKS protocol typically involves either the recompilation or relinking of TCP-based client applications, or the use of alternate dynamically loaded libraries, to use the appropriate encapsu- lation routines in the SOCKS library.

When a TCP-based client wishes to establish a connection to an object that is reachable only via a firewall (such determination is left up to the implementa- tion), it must open a TCP connection to the appropriate SOCKS port on the SOCKS server system. The SOCKS service is located on TCP port 1080. If the con- nection request succeeds, the client enters a negotiation for the authentication method to be used, authenticates with the chosen method, and then sends a relay request. The SOCKS server evaluates the request and either establishes the appropriate connection or denies it. UDP exchanges are handled in a similar fash- ion. In essence, a TCP connection is opened to authenticate a user to send and receive UDP segments, and the UDP segments are forwarded as long as the TCP connection is open.