It is common to base a firewall on a stand-alone machine running a common oper- ating system, such as UNIX or Linux. Firewall functionality can also be imple- mented as a software module in a router or LAN switch. In this section, we look at some additional firewall basing considerations.

A bastion host is a system identified by the firewall administrator as a critical strong point in the network’s security. Typically, the bastion host serves as a platform for an application-level or circuit-level gateway. Common characteristics of a bastion host are as follows:

•                          Only the services that the network administrator considers essential are installed on the bastion host. These could include proxy applications for DNS, FTP, HTTP, and SMTP.

•                          Each proxy is configured to allow access only to specific host systems. This means that the limited command/feature set may be applied only to a subset of systems on the protected network.

•                 Each proxy module is a very small software package specifically designed for network security. Because of its relative simplicity, it is easier to check such modules for security flaws. For example, a typical UNIX mail application may contain over 20,000 lines of code, while a mail proxy may contain fewer than 1000.

•                 A proxy generally performs no disk access other than to read its initial config- uration file. Hence, the portions of the file system containing executable code can be made read only. This makes it difficult for an intruder to install Trojan horse sniffers or other dangerous files on the bastion host.

A host-based firewall is a software module used to secure an individual host. Such modules are available in many operating systems or can be provided as an add-on package. Like conventional stand-alone firewalls, host-resident firewalls filter and restrict the flow of packets. A common location for such firewalls is a server. There are several advantages to the use of a server-based or workstation- based firewall:

•                 Protection is provided independent of topology. Thus both internal and exter- nal attacks must pass through the firewall.

•                 Used in conjunction with stand-alone firewalls, the host-based firewall pro- vides an additional layer of protection. A new type of server can be added to the network, with its own firewall, without the necessity of altering the net- work firewall configuration.

A personal firewall controls the traffic between a personal computer or workstation on one side and the Internet or enterprise network on the other side. Personal fire- wall functionality can be used in the home environment and on corporate intranets. Typically, the personal firewall is a software module on the personal computer. In a home environment with multiple computers connected to the Internet, firewall functionality can also be housed in a router that connects all of the home computers to a DSL, cable modem, or other Internet interface.

Personal firewalls are typically much less complex than either server-based firewalls or stand-alone firewalls. The primary role of the personal firewall is to deny unauthorized remote access to the computer. The firewall can also monitor outgoing activity in an attempt to detect and block worms and other malware.

An example of a personal firewall is the capability built in to the Mac OS X operating system. When the user enables the personal firewall in Mac OS X,  all inbound connections are denied except for those the user explicitly permits. Figure 22.2 shows this simple interface. The list of inbound services that can be selectively reenabled, with their port numbers, includes the following: 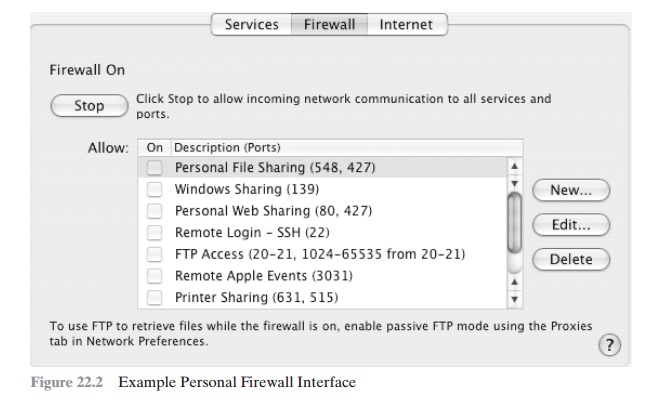 For increased protection, advanced firewall features are available through easy-to-configure checkboxes. Stealth mode hides the Mac on the Internet by drop- ping unsolicited communication packets, making it appear as though no Mac is present. UDP packets can be blocked, restricting network traffic to TCP packets only for open ports. The firewall also supports logging, an important tool for check- ing on unwanted activity.