As Figure 22.1a indicates, a firewall is positioned to provide a protective barrier between an external, potentially untrusted source of traffic and an internal network. With that general principle in mind, a security administrator must decide on the location and on the number of firewalls needed. In this section, we look at some common options.

Figure 22.3 suggests the most common distinction, that between an internal and an external firewall. An external firewall is placed at the edge of a local or enterprise network, just inside the boundary router that connects to the Internet or some wide area network (WAN). One or more internal firewalls protect the bulk of the enter- prise network. Between these two types of firewalls are one or more networked devices in a region referred to as a DMZ (demilitarized zone) network. Systems that are externally accessible but need some protections are usually located on DMZ networks. Typically, the systems in the DMZ require or foster external con- nectivity, such as a corporate Web site, an e-mail server, or a DNS (domain name system) server.

The external firewall provides a measure of access control and protection for the DMZ systems consistent with their need for external connectivity. The external 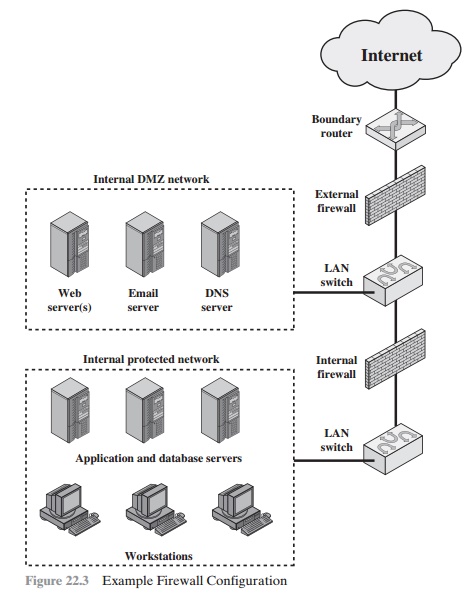 firewall also provides a basic level of protection for the remainder of the enterprise network. In this type of configuration, internal firewalls serve three purposes:

In today’s distributed computing environment, the virtual private network (VPN) offers an attractive solution to network managers. In essence, a VPN consists of a set of computers that interconnect by means of a relatively unsecure network and that make use of encryption and special protocols to provide security. At each corporate site, workstations, servers, and databases are linked by one or more local area net- works (LANs). The Internet or some other public network can be used to intercon- nect sites, providing a cost savings over the use of a private network and offloading the wide area network management task to the public network provider. That same public network provides an access path for telecommuters and other mobile employees to log on to corporate systems from remote sites.

But the manager faces a fundamental requirement: security. Use of a public network exposes corporate traffic to eavesdropping and provides an entry point for unauthorized users. To counter this problem, a VPN is needed. In essence, a VPN uses encryption and authentication in the lower protocol layers to provide a secure connection through an otherwise insecure network, typically the Internet. VPNs are generally cheaper than real private networks using private lines but rely on having the same encryption and authentication system at both ends. The encryption may be performed by firewall software or possibly by routers. The most common protocol mechanism used for this purpose is at the IP level and is known as IPsec.

An organization maintains LANs at dispersed locations. A logical means of implementing an IPsec is in a firewall, as shown in Figure 22.4, which essentially repeats Figure 19.1. If IPsec is implemented in a separate box behind (internal to) the firewall, then VPN traffic passing through the firewall in both directions is encrypted. In this case, the firewall is unable to perform its filtering function or other security functions, such as access control, logging, or scanning for viruses. IPsec could be implemented in the boundary router, outside the firewall. However, this device is likely to be less secure than the firewall and thus less desirable as an IPsec platform. 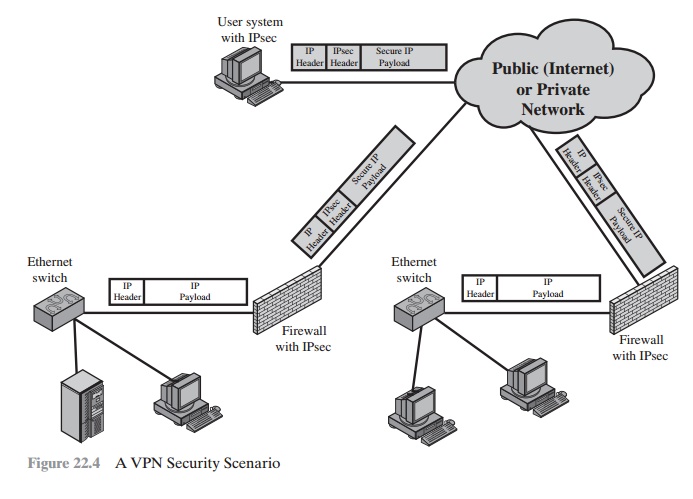 With distributed firewalls, it may make sense to establish both an internal and an external DMZ. Web servers that need less protection because they have less critical information on them could be placed in an external DMZ, outside the exter- nal firewall. What protection is needed is provided by host-based firewalls on these servers.

Summary of Firewall Locations and Topologies

We can now summarize the discussion from Sections 22.4 and 22.5 to define a spectrum of firewall locations and topologies. The following alternatives can be identified: 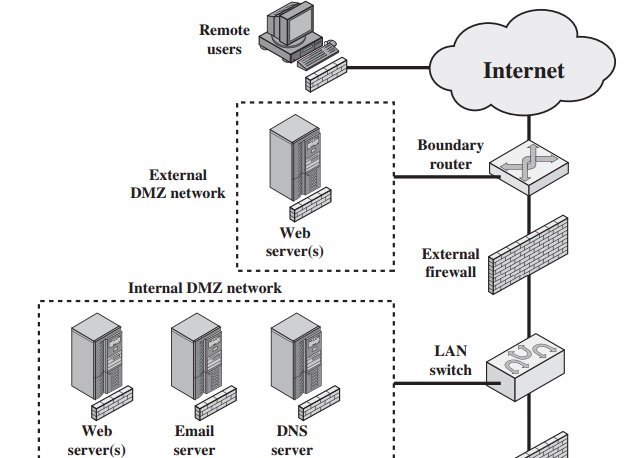 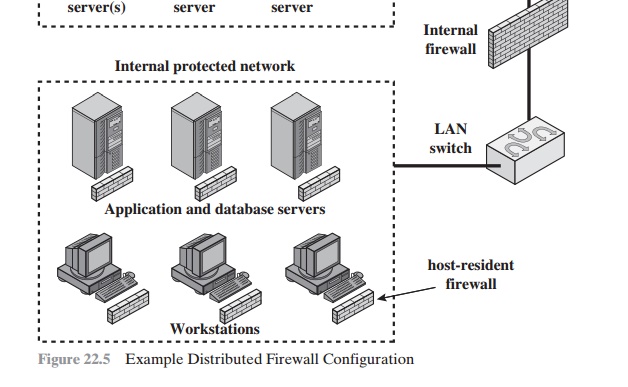 Single bastion inline: A single firewall device between an internal and external router (e.g., Figure 22.1a). The firewall may implement stateful filters and/or application proxies. This is the typical firewall appliance configuration for small to medium-sized organizations.