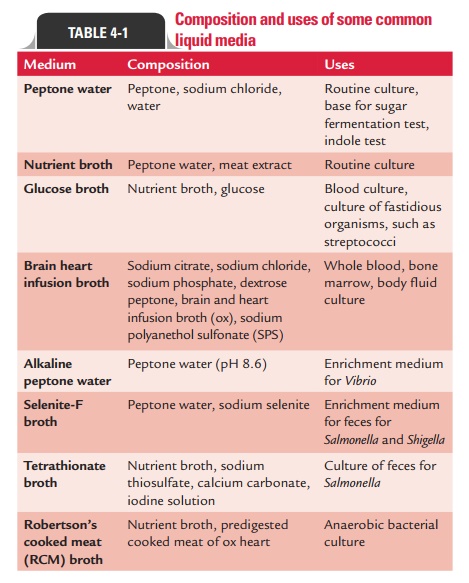 ◗ Solid media
Agar is used as a solidifying agent in most culture media. By varying the concentration of agar, it is possible to make the medium solid or semisolid. Solid media, though somewhat less sensitive than liquid media, provide isolated colonies that can be quantified and identified. Some genera and species can be recognized on the basis of their colony morphologies. Nutrient agar (Fig. 4-1) prepared by adding 2% agar to nutrient broth is the simplest and most common medium used routinely in diagnostic laboratories. Other examples of solid media include blood agar, chocolate agar, MacConkey agar, etc. Composition and uses of some common solid media are summarized in Table 4-2. 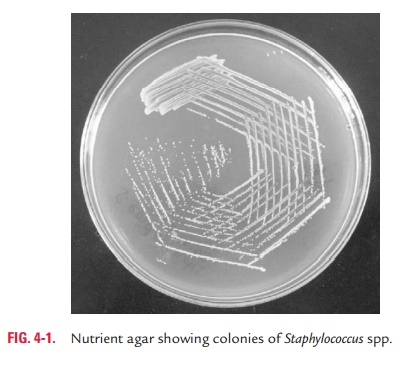 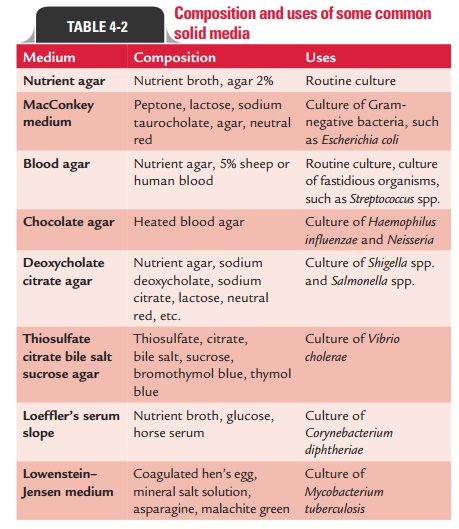 ◗ Semisolid media
Addition of reduced concentration of agar (0.2–0.4%) makes the medium semisolid, which facilitates spread of the bacteria in the medium.

◗ Simple media
The simple or basal media include nutrient broth and peptone water, which form the basis of other media.
o   Nutrient broth is an example of a simple liquid mediumthat consists of peptone, meat extract, sodium chloride, and water. Addition of 0.5% glucose to nutrient broth makes it glucose broth.
o   Nutrient agar is an example of a simple solid medium. Themedium is used routinely for isolation of many bacteria from clinical specimens.
◗ Complex media
Most of the media other than basal media are usually known as complex media [e.g., chocolate agar, MacConkey agar, Robertson’s cooked meat (RCM) medium, Lowenstein–Jensen (LJ) medium, etc.]. Complex media have some complex ingredi-ents, which consist of a mixture of many chemicals in unknown proportions. This is an undefined medium, because the amino acid source contains a variety of compounds with the exact composition unknown. The complex media contain:
o   Water,
o   A carbon source such as glucose for bacterial growth,
o   Various salts needed for bacterial growth, and
o   A source of amino acids and nitrogen (e.g., beef and yeast extract).
◗ Defined media
A defined medium, also known as synthetic medium, contains known quantities of all ingredients. All the chemicals used are known, and it does not contain any animal, yeast, or plant tissue. These media consist of:
o   Trace elements and vitamins;
o   A defined carbon source and nitrogen source required by certain microbes. Glucose or glycerol is often used as carbon sources and ammonium salts or nitrates as inorganic nitro-gen sources.
Dubos’ medium with Tween 80 is an example of this medium.

◗ Special media
These include (a) enriched media, (b) enrichment media, (c) selective media, (d) indicator or differential media, (e) trans-port media, and ( f ) sugar media.
Enriched media: The enriched media are invariably solid mediathat facilitate growth of certain fastidious bacteria. These media are prepared by adding substances like blood, serum, and egg to the basal media in order to meet the nutritional requirements of more exacting and more fastidious bacteria. Blood agar (Color Photo 1), chocolate agar, Loeffler’s serum slope (LSS), and LJ medium are some examples of enriched media. Blood agar is an enriched medium in which nutritionally rich whole blood supplements constitute the basic nutrients. Chocolate agar is enriched with heat-treated blood (80°C), which turns brown and gives the medium the color for which it is named.
Enrichment media: Enrichment media are liquid mediathat stimulate the growth of certain bacteria or suppress the growth of others for isolation of desired pathogenic bacteria. Commensal bacteria, such as Escherichia coli present in feces, tend to overgrow pathogenic ones in stool specimen. In such situations, enrichment media (such as selenite-F broth or tetrathionate broth) are used for the isolation of Salmonella Typhi and Shigella spp. from feces. 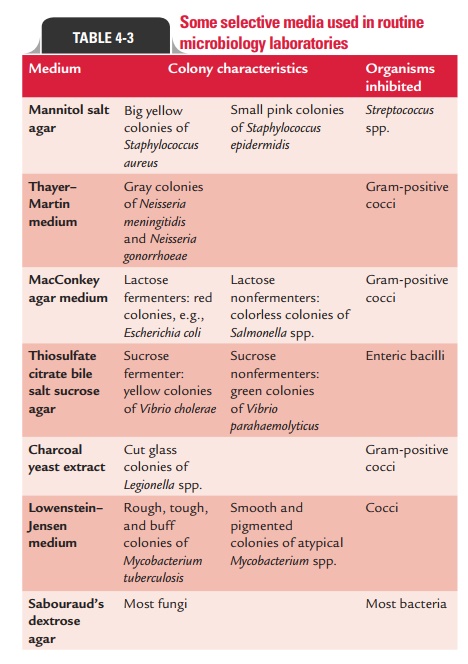 ·        Mannitol salt agar (MSA), differential for mannitol fermentation; and
·        X-gal plates, differential for lac operon mutants for detection of recombinant strains of bacteria for study in molecular biology.
Transport media: Transport media are used to maintain the via-bility of certain delicate organisms in clinical specimens during their transport to the laboratory. They typically contain only buf-fers and salt. They lack carbon, nitrogen, and organic growth fac-tors, hence do not facilitate microbial multiplication. Examples of transport media are Stuart’s transport medium for Neisseriagonorrhoeae.
Sugar media: Sugar media, basically contains 1% “sugar”,which in microbiology denotes any fermentable substance, such as glucose, sucrose, lactose, and mannitol that is routinely used for fermentation tests. The sugar media shows the follow-ing characteristics:
·        It consists of 1% sugar in peptone
·        The indicator used in sugar media is Andrade’s indicator that consists of 0.005% acid fuchsin in 1 N NaOH. The production of acid after fermentation of sugar is indicated by the change of color of the medium to pink due to the presence of indicator.
·        Durham’s tube is kept inverted inside the sugar tube to demonstrate the production of gas. Production of gas is indi-cated by the demonstration of gas bubble in Durham’s tube.