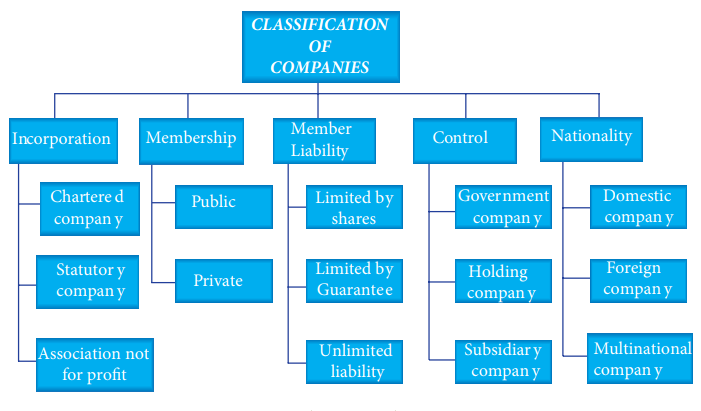 1. Classification of Companies on the Basis of Incorporation

Chartered companies are established by  the King or Queen of a country. Powers and privileges of chartered company are specified in the charter. Power to  cancel the charter is vested with King/Queen. Examples: East  Indian  Company,  Bank  of England, Hudson’s Bay Company. The Companies Act does not apply to them. Such companies cannot be started in India.

Companies are established by a  Special Act made in Parliament/State Assembly. Constitution of company is specified  in  the Memorandum of Association (MOA). Rules relating to day-to-day management of statutory companies are  specified  in  the Articles of Association (AOA). Audit  of statutory company is conducted by Comptroller and Auditor General of India (CAGI). The report of CAGI is placed in Parliament/State Assemblies concerned. Examples: Food Corporation of India, LIC, GIC, RBI, SBI, IDBI, Railways, Electricity, ONGC. Statutory companies enjoy autonomous status. It need not use the word ‘Limited’ next to its name.

c. Association Not for Profit

According to Section 25, the Central Government may, by license, grant that an association may be registered as a company with limited liability, without using the words ‘limited’ or ‘private limited’ as part of its name. The license will be granted only in the case of ‘association not for profit’. In other words, the Central Government will grant the license only if it is satisfied that:

(i) The association about to be formed as a limited company aims at the promotion of Sports, Commerce, Art, Science, Religion, Charity or any other useful object.

(ii) It intends to apply its profits, if any, for promoting its objects.

(iii) It prohibits the payment of dividend to its members.

Such companies may be public or private companies and may or may not have share capital.

2. Classification of Companies on the Basis of Membership

Private limited company is a type of company which is formed with minimum two shareholders and two directors, The minimum requirement with respect to authorised or paid up capital of  Rs. 1,00,000 has been omitted by The Companies (Amendment) Act, 2015 w.e.f. 29th of May, 2015. Another crucial condition of a private limited company is that it by its articles of association restricts the right to transfer its shares & also prohibits any invitation to the public to subscribe for any securities of the company. Maximum of 200 persons can become shareholders in a private company. The name of private company should be suffixed with pvt ltd or (p) ltd. Ex. Scientific publishing services private Limited, Chennai. A private Limited company can be formed in three variations.

Public Company means a company which is not a private company. A public company may be said to be an association which

i. consists of at least 7 members.

iii. is a subsidiary of a company which is not a private company.

iv. does not restrict the right to transfer its shares.

v. does not prohibit any invitation to subscribe for any shares or debentures of the company.

vi. does not prohibit any invitation or acceptance of deposits. (The name of public company should be suffixed with ltd. Ex.National Aluminium company Limited, Chennai )

3. Classification of Companies on the Basis of Liability

a. Company Limited by Shares

Thus two main features of a company limited by shares are as follows:

i. The liability of its members is limited to the amount (if any) remaining unpaid on the shares held by them.

b. Company Limited by Guarantee

An unlimited company is a company in which the liability of its members is not limited by its Memorandum. In other words, the liability of members is unlimited i.e., there is no limit on the liability of members. The members of such companies may be required to pay company’s losses from their personal property. Because such companies have separate legal entity, its creditors cannot file a suit against the members directly. The creditors will have to apply to the court for the winding up of the company and then the liquidator will direct the members to contribute to the assets of the company to pay off its liabilities.

4. Classification of Companies on the Basis of Membership

A public enterprise  incorporated  under  the Indian Companies Act, 1956 is called   a government company. These companies are owned and managed by the central or the state government. Section 617 of the Companies Act, 1956 defines “Government Companies” as any company in which not less than 51% of the [paid-up share capital] is held by.

3.        Partly by the Central Government and partly by one or more State Governments.

ii.               exercises or controls more than one- half of the total share capital either at its own or together with one or more of its subsidiary companies:

i. controls the composition of the Board of Directors; or

ii. exercises or controls more than one- half of the total share capital either at its own or together with one or more of its subsidiary companies:

Examples: H Ltd., holds more than 50% of the equity share capital of S Ltd. Now H Ltd., is the holding company of S Ltd., and S Ltd., is the subsidiary of H Ltd.

5. Classification of Companies on the Basis of Nationality

A company which cannot be termed as foreign company under the  provision  of the Companies Act should be regarded as a domestic company.

A foreign company means a company which is incorporated in a country outside India under the law of that country. After the establishment of business in India, the following documents must be filed with the Registrar of Companies within 30 days from the date of establishment.

(i) A certified copy of the charter or statutes under which the company is incorporated, or the Memorandum and articles of the company translated into English.

(ii) The full address of the registered office of the company.

(iii) A list of directors and secretary of the company.

(iv) The name and address of any person resident of India who is authorised to accept, on behalf of the company, service of legal process and any notice served on the company.

(v) The full address of the company’s principal place of business in India.

A Multi National Company (MNC) is a huge industrial organisation which,

i. Operates in more than one country

ii. Carries out production, marketing and research activities on international Scale in those countries.

A domestic company or a foreign company can be a MNC.