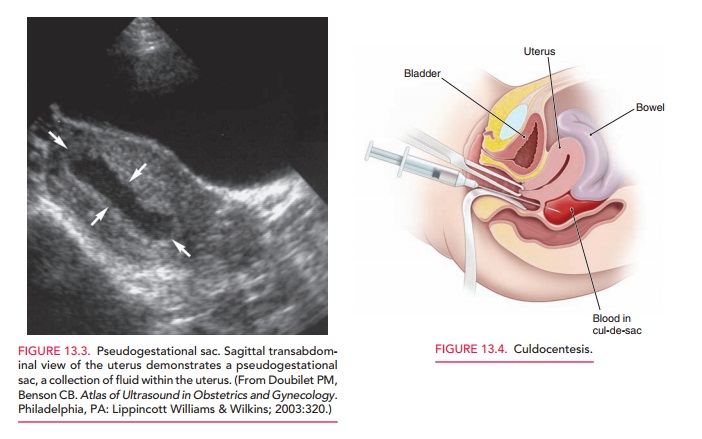 Symptoms of ectopic pregnancy can mimic multiple entities. Early pregnancy complications (threatened, incomplete, or missed abortion), placental polyp, or hemorrhagic corpus luteal cyst are difficult to diagnose. Moreover, early bleed-ing occurs in about 20% of women with normal pregnan-cies. A number of nonpregnancy-related disorders, such as appendicitis and renal calculi, can mimic ectopic pregnancy.

The rapid and accurate diagnosis of ectopic pregnancy is imperative to reduce the risk of serious complications or death. Up to half of the women who have died as a result of ec-topic pregnancy had a lag in treatment because of delayed or inaccurate diagnoses. Any sexually active woman in the reproductive age group who presents with pain, irregular bleeding, and/or amenorrhea should have ectopic preg-nancy as a part of the initial differential diagnosis.

TVS and serial serum β-hCG measurements are the most valuable diagnostic aids to confirm the clinical suspicion of an ectopic pregnancy.

The initial assessment in the otherwise hemodynam-ically stable patient must include a pregnancy test. A neg-ative pregnancy test excludes the possibility of ectopic pregnancy. Urinary pregnancy tests, which detect hCG levels to 20 IU/L, are now commonly available. These tests detect hCG as early as 14 days after conception and are positive in more than 90% of cases of ectopic pregnancy. Serum assays can detect the presence of hCG as early as 5 days after conception, that is, before the missed men-strual cycle; however, because they require additional time and expertise to perform, they are often not used in a po-tentially emergent clinical setting.

If a positive pregnancy test is found when ectopic preg-nancy is suspected, the remainder of the workup should focus on evaluating the viability and location of the preg-nancy. In normal pregnancies, serum β-hCG levels rise in a log-linear fashion until 60 or 80 days after the last menses, at which time values plateau at about 100,000 IU/L. Dur-ing this period a 66% or greater increase in serum β-hCG levels should be observed every 48 hours. Approximately 15% of normal intrauterine pregnancies are associated with less than a 66% increase in hCG, and 17% of ectopic pregnancies have normal doubling times. Deviation from this pattern should raise suspicion for a pregnancy that is not proceeding normally, including ectopic pregnancy. Although inappropriately rising serum β-hCG levels suggest (but do not diagnose) an abnormal pregnancy, they do not iden-tify its location.

A key adjunct to serial quantitative levels of hCG is pelvic ultrasonography (Fig. 13.2). High-resolution ul-trasonography has revolutionized the clinical manage-ment of women with a suspected ectopic pregnancy. Using TVS, a gestational sac is usually visible between 41⁄2 and 5 weeks from the last menstrual period, the yolk sac appears between 5 and 6 weeks, and a fetal pole with cardiac activity is first detected at 51⁄2 to 6 weeks. 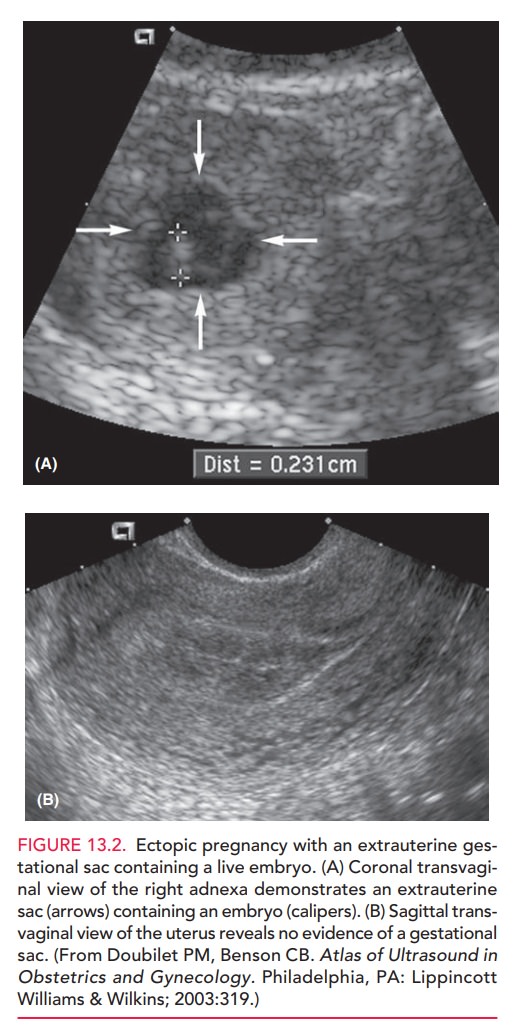 With transabdominal sonography these structures are visualized slightly later. Each institution must define a β-hCG dis-criminatory value, that is, the lower limit of hCG atwhich an examiner can reliably visualize pregnancy on ultrasound. The more sensitive transvaginal ultrasonogra-phy should show the pregnancy by the time the hCG level is 1000 to 2000 IU/L. Transabdominal ultrasonography should be able to identify an intrauterine gestation by the time the hCG level reaches 5000 to 6000 IU/L. Accurate diagnosis by sonography is three times more likely if the initial β-hCG level is above this value. The absence of uterine pregnancy with β-hCG levels above the discrimi-natory value signifies an abnormal pregnancy—ectopic, incomplete abortion, or resolving completed abortion. Care must be taken to differentiate between a uterine ges-tation and a pseudogestational sac. This one-layer sac is the result of an intracavitary fluid collection caused by sloughing of the decidua typically situated in the midline of the uterine cavity, whereas a normal gestational sac is eccentrically located (Fig. 13.3). 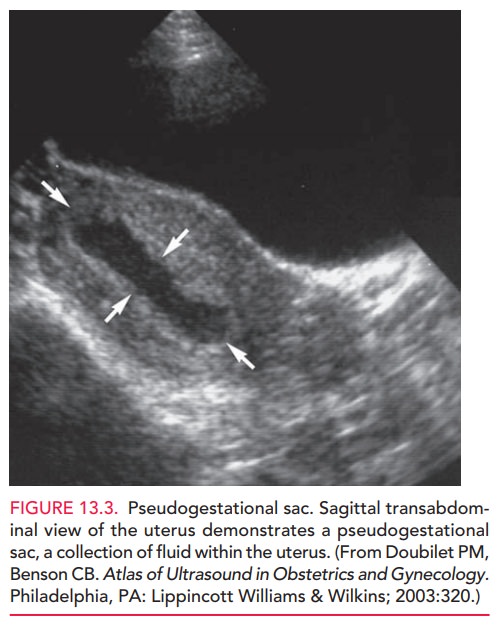 Culdocentesis can identify hemoperitoneum (bloodin the peritoneal cavity), which may indicate a ruptured ectopic pregnancy, although it is also consistent with other causes, such as a ruptured corpus luteum cyst. An 18-gauge needle is inserted posterior to the cervix, between the utero-sacral ligaments, and into the cul-de-sac of the peritoneal cavity (Fig. 13.4). Aspiration of clear peritoneal fluid (neg-ative culdocentesis) indicates no hemorrhage into the abdominal cavity but does not rule out an unruptured ectopic pregnancy. 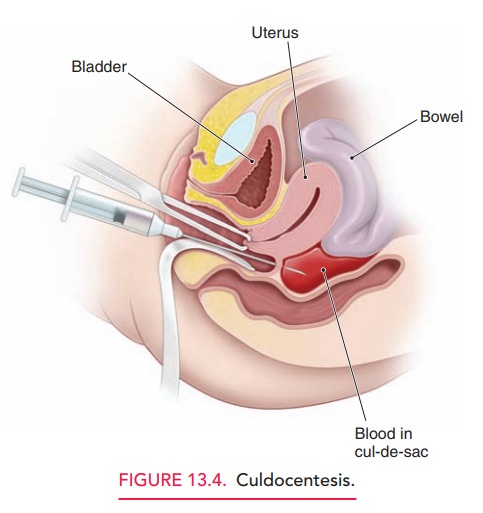 Aspiration of blood that clots can indicate either penetration of a vessel or such rapid blood loss into the peritoneal cavity that the blood clot has not had time to undergo fibrinolysis. Nonclotting blood is evidence of hemoperitoneum (positive culdocentesis), in which the blood clot has undergone fibrinolysis. If nothing is aspirated (equivocal or nondiagnostic culdocentesis), no information is obtained. Purulent fluid suggests a num-ber of infection-related causes, such as salpingitis or appendicitis. Because no finding on culdocentesis can definitively confirm the presence or absence of ectopic pregnancy, its use in clinical practice has declined. When used, the primary utility of culdocentesis is that a positive culdocentesis identifies blood in the peritoneal cavity and confirms the need for further evaluation to identify the source of the bleeding.

The most accurate technique of identifying an ectopic pregnancy is by direct visualization, which is done most commonly via laparoscopy. Even laparoscopy, however, has a 2% to 5% misdiagnosis rate. For example, an ex-tremely early tubal gestation may not be identified because it may not distend the fallopian tube sufficiently to be rec-ognized as an abnormality (false-negative). Conversely, a false-positive diagnosis may result from a hematosalpinx (blood in the fallopian tube) being misinterpreted as an unruptured ectopic pregnancy or tubal abortion.