Read this section of the letter silently. Discuss with your partner and describe the incident.

Read this section of the letter silently. Discuss with your partner and describe the incident.

There was a cute baby elephant sitting on the track! The mother elephant was nearby trumpeting loudly. The engine driver tried to coax the baby off the track with a bunch of bananas. The mother didn’t let anyone near the baby. So, people stood around trying to make the baby move by making all kinds of sounds. The baby just sat there looking frightened and the mother kept trumpeting. Finally, Muthu, the naughty boy of the class, went up to the baby with a bunch of bananas. Just as it moved to eat it, he moved backwards. He kept doing this till the baby was out on the side of the tracks. Luckily, the mother too, stopped trumpeting and watched the whole show. Everyone cheered as the baby started eating the bananas. Many bunches of bananas were piled near the baby and the mother. As they were eating, everyone got into the train and it left after a delay of half an hour. Geetha ma’am had told us that we would see elephants if we were lucky! 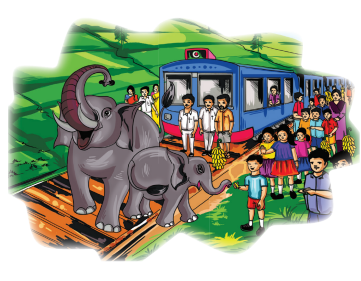 “Madam wouldn’t have imagined we would see a wild elephant this close!” said Fatima.

It was such a fantastic trip. On a normal fast train ride, we do not notice the scenery or the landscape. It rushes by so fast. But slowly chugging up and down the beautiful mountainside was different. I will never forget the wide, wind-swept tea estates, cloud covered mountains or the swaying trees. It was enchanting to listen to the murmur of streams and waterfalls and musical bird calls. We even saw an elephant and its baby! Our whole group was so excited by the trip and they still talk about it.

1. What made the trip a memorable one?

During the trip the group saw the wide, wind-swept tea estates, cloud covered mountains and the swaying trees. The murmur of streams and waterfall and the musical bird calls enchanted everyone. The pupils saw an elephant and its baby. All these made the trip a memorable one.

2. What does the phrase ‘presence of mind’ mean? Explain the phrase using Muthu’s action.

Presence of mind means ability to react quickly in a critical situation. During their trip to Ooty, a baby elephant sat on the railway track and refused to move. Muthu coaxed the elephant by holding a bunch of bananas and moving backwards. The baby elephant slowly moved towards the bananas and thus the track became clear. This incident shows that Muthu had the presence of mind.

3. What is the difference between this toy train and a normal train?

Describe the incident that showed Muthu's presence of mind.

Coax /kəʊks/ - Persuade (someone) gently to do something