You have come across many terms associated with an auction, in the lesson. Now solve the crossword puzzle with words from the lesson. Make use of the clues given. 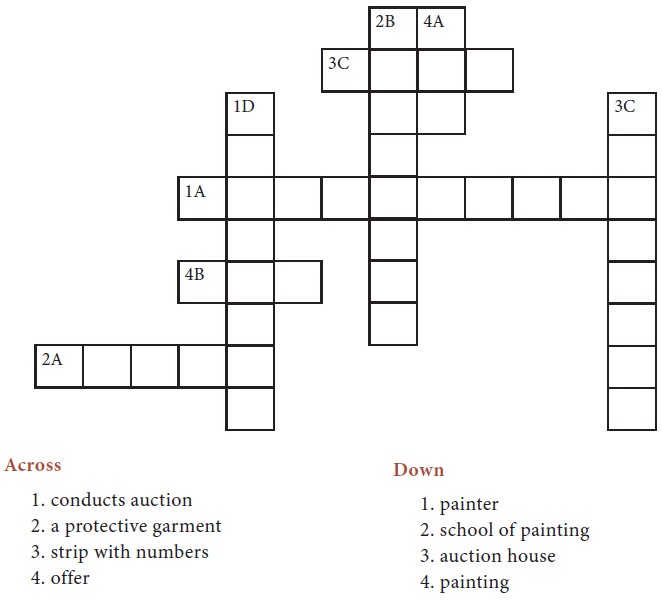 2. a protective garment  2. school of painting

(ii) Idioms: An idiom is an expression in English with a special meaning of its own. Idioms do not give the literal meaning of the individual words used in them.

You come across the idiom ‘by the skin of one’s teeth’ in the lesson. It means ‘a narrow escape’.

My friend escaped from the accident by the skin of his teeth.

(A) Here are some more idioms taken from the lesson. Find out their meanings and use them in sentences of your own. 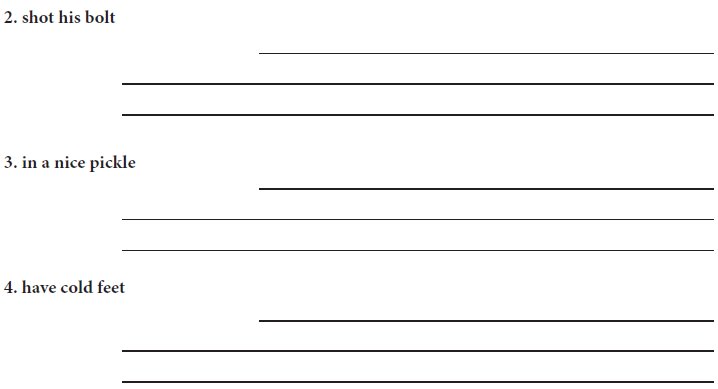 1. tight corners : in a difficult situation

- When I got both medical and engineering seats I was in tight corners.

3. In a nice pickle : in a troublesome or difficult situation

- The politician was in a nice pickle when the income tax department had seized lakhs of rupees in unaccountability.

- My friend always has cold feet before the start of his program.

(B) Match the following idioms related to difficult situations with their meanings.

(C) We use a variety of idioms in our daily life to describe various situations. Describe the narrator’s situation in your own words, making use of some of the new idioms you have just learnt.

A friend of the narrator took him to Christie’s an auction house. The narrator had only sixty-three guineas, but he started bidding for fun. Every time some other dealer offered more and the narrator did not run any risks. A red-faced dealer offered four thousand guineas for a picture, the n’arrator announced “And Fifty”. The first dealer gave no sign of life. The narrator was caught in a tight corner. The auctioneer declared the narrator as the buyer. The narrator was at his wit’s end. He started thinking of how to escape. He was ready to clutch at straws to escape. He felt he was hangout dry. But a messenger from the red-faced dealer told the narrator to receive fifty guineas and handover the picture to the dealer. Now, the narrator felt himself on cloud nine (very happy). He was saved by the cell. He escaped dishonor by a hair’s breath.

Use the following phrasal verbs in sentences of your own. The first one has been done for you:

i)int: The police looked into the matter of scandal case.

ii) at: Prema looked at the image for a long time.

iii)through: I’ve just been looking through your cookery books for inspiration.

i) over : The lorry ran over the motorist.

ii) away : On seeing the police the thief ran away.

iii) into : Flood damages could run into millions.

i) on : We put on new dress for the marriage function.

ii) up : Brutus put up a war against Antony but in vain.

iii) off : The match has been put off due to rain.