If you stand in the rain, you get wet.

If you heat ice, it melts.

Uses: Facts which are generally true or scientific factsThe condition always has the same result

If it rains, we will cancel the trip.

If you study, you will pass the exam.

If I won the lottery, I would travel a lot.

If they sold their houses, they would be rich.

Past Simple +Would + Verb

Unreal or improbable situation now or in the future

If you had studied, you would have passed the exam.

If I hadn’t been sick, I would have gone to your party.

Past Perfect + Would have+ Past Participle

Uses: The person imagining a different past. Imaginary situation that did not happen

i) Complete the following with appropriate conditional clauses.

Did you hear about that boy who won one crore in a game show? If I won (win) that much money, I would quit (quit) my job the next day. I would travel (travel) round the world and saw (stay) in the most luxurious hotels. If I wanted (want) anything, I would buy (buy) it. If I saw (see) a Mercedes that I wanted, I would buy (buy) it. I could (can) do anything in the world if I had one crore rupees. Oh, I am starting to sound a little materialistic. Well, I would do (do) good things with the money as well. If anybody needed (need) help, I would take (take) care of their needs. I would donate (donate) money to charities. I would give (give) money to help support the arts. If I won (win) that much money,I wouldn’t keep it all for myself. I would help (help) as many people as possible.

iii) Fill in the blanks in the following dialogue.

Muthu: Well, you would look (look) terrible today, too, if you had had (have) a day like mine yesterday. My car slid into a tree, because the roads were slippery.

Gopal: Oh! I was driving on the slippery roads yesterday, and I didn’t have such trouble. What happened?

Muthu: Well, I think if I had not driven (drive not) so fast, I would not have slid (slide, not) into the tree.

Muthu: I know. But I have one more problem. I didn’t have my driver’s license with me. If I had had (have) it, I would not have had to (have to, not) pay an extra fine in the court next week.

Gopal: Why were you driving without your license?

Muthu: Well, I lost my wallet some days ago. It slipped out of my pocket, while I was riding the bus to work.

go to court next week. And of course, if you had not driven (drive, not) too fast, you would not have run into (run into, not) a tree, and you would not have been (be, not) in this mess now. If I were (be) you, I would take (take) it easy for a while and just stay (stay) home where you are safe.

Muthu: Enough about me! How about you?

Gopal: Well, things are really looking up for me. I’m planning to take off for Goa as soon as I finish my finals. I’m sick of all this old, rainy weather we’ve been having.

Muthu: I wish I could go (go) with you. How are you planning on getting there?

Gopal: If I have (have) enough money, I will fly (fly). Otherwise, I will take (take) the bus. I wish could drive (drive) my own car because it would be (be) nice to drive there, but it’s such a long trip. I’ve been looking for a friend to go with me and share the driving.

Muthu: I have a super idea! Why don’t I go with you? I can share the driving. I’m a great driver!

A. Seema goes to a hotel for lunch. The waiter explains to her the different items available at that time. Here is the conversation between them. Complete the dialogue. You may use modals to frame questions.

Seema: Could I get something to eat immediately?

Waiter: Yes Ma’am. We have many dishes according to the menu. What would you like to have?.

Seema: Is Chinese food available? Can you get me some noodles?

Waiter: Yes Ma’am. It is available.

Seema: How long will it take to serve ?

Seema: Yes bring that too. May I have packaged mineral water?

Waiter: Yes Ma’am. Do you like it cold or at normal one?

Seema: I prefer it cold. Can I have ice cream?

Waiter: Sorry Ma’am we don’t have ice creams served here. But you can get it in the outlet next door.

B. Read the following story and do the exercises that follow.

Last night somebody broke into our neighbour’s house. He stole everything he found. The neighbours, Mr. and Mrs. Umar saw him while he was running away but they couldn’t catch him. This morning an inspector arrived to make an inquiry.

The Inspector: The thief broke into the house at around 10 p.m. What were you doing then?

Mr. Umar: I was watching a movie with my wife.

Then I went to the kitchen to prepare tea.

The Inspector: How many minutes did you spend in the kitchen?

The Inspector: Did you only prepare tea?

The Inspector: OK. Thanks.

The Inspector: What were you doing at around 10 pm yesterday?

Mrs. Umar: I was watching a movie while drinking my coffee.

The Inspector: Coffee? But your husband prepared tea.

The Inspector: OK. What was he doing in the kitchen?

Mrs. Umar: He was thirsty. He wanted to drink water.

The Inspector: Hmmm. What happened then?

Mrs.Umar: A friend of his called him and he went out to help him.

The Inspector: So, you were alone at home, weren’t you?

Mrs.Umar: Yes, I was. I called him immediately but he didn’t answer.

The inspector was suspicious about Mr.Umar and so he asked him to come to the station for further questioning.

The Inspector: You weren’t at home when the thief broke into your neighbour’s house. Where were you?

Mr.Umar: I went out to help a friend of mine.

The Inspector: Who is that friend?

Mr.Umar: Ehhhh… he is just a friend.

The Inspector: Hmmm. Who is that friend?

Mr.Umar: I told you already. He is just a friend. 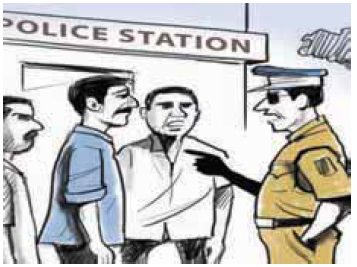 If you cannot prove that you were with a friend, we can arrest you.

At the end of the questioning session, Mr.Umar told the inspector the truth.

“Last night, somebody called me, but he wasn’t my friend. I had borrowed some money from him and he had given me time till last night to return it. But I did not do so. So, he called home asking me to meet him outside the house. That’s why I went out. I did not tell my wife as I did not want her to know about it. When I went out, I saw a stranger entering my neighbour’s house but I did not stop as I was in a hurry to meet the moneylender.

Answer the questions after reading the story.

When the theif broke into the house she was watching a movie.

No, Mr. Umar was not watching movie with his wife when the thief broke into the house.

Was Mr. Umar at home when the event occurred?

Did Mr. Umar see the thief entering the neighbour’s house?

3.        Mrs. Umar was watching the movie while her husband was drinking water.

What was Mrs. Umar doing while her husband was drinking water?

4.        The thief broke into the house while they were watching a movie.

When did the thief break into the house?

A question tag is a short question added at the end of a statement. It is generally used when asking for agreement or confirmation.

The tag is formed with the auxiliary verb in the statement and the subject. A positive statement takes a negative tag, while a negative statement takes a positive tag. If the sentence contains a main verb, then the question tag uses an apppropriate form of ‘do’ verb. An appropriate pronoun of the subject is added to the verb to form the tag. The sentence ends with a comma, followed by a tag which ends with a question mark.

Look at the following sentences.

You are a student, aren’t you?

Aji is not a lawyer, is she?

Lawrence saw the snake sliding into the hole, didn’t he?

The intonation (the rise and fall of the voice in speaking) of the tag determines the meaning of the question tag.

Look at this sentence and the tag. Madhav doesn’t speak Telugu, does he?

If the intonation of the tag goes up, it means we are not sure if Madhav speaks Telugu and we want to know if he does.

If the intonation of the tag goes down, it means we are checking or confirming if Madhav speaks Telugu.

A. Add appropriate question tags to the following sentences.

2.        They experiment with ways to improve air quality. don’t they

4.        There is an urgent need to provide clean, reliable and affordable energy to their growing populations. isn’t it

5.        Automation and shared mobility will play a key role in this transformation. won’t they

7.        Before long, a fleet of electric autonomous vehicles (AVs) could drive people to their destinations. couldn’t they

8.        These shared AVs will run at higher utilization rates. won’t they

9.        They can substantially reduce the cost of mobility and congestion. can’t they

10.   These should not be thought of as luxury but as necessity. should they

B. Add appropriate question tags and role play the dialogue with your friend.

Anish: Yes. They have set a very long paper. Yet, I managed to finish the paper.  don’t they?

Jeyanth: True. My maths paper too was very long. I couldn’t finish it.  could I?

Anish: I could not solve my paper properly.  could I?

Anish: Mine wasn’t easy. I made a silly mistake. didn’t I?

Jeyanth: Tell me about your English paper. will you?

Anish: The story comprehension was very easy. I am sure to score more than ten marks on fifteen. I wrote it very well. There wouldn’t be any mistake.  would there?

Jeyanth: For me, my letter- writing was the best. I didn’t make a single mistake. did I?

Anish: Ok. I’ve got lots to study for tomorrow’s exam. don’t I?

Jeyanth: Me too. So, see you later. All the best, bye.

Anish: Thank you. Wish you the same, bye.