Multinodular goiter (nontoxic goiter) refers to an enlarged thyroid gland with mul-tiple colloid nodules. Females are affected more often than males. It is frequently asymptomatic, and the patient is typically euthyroid, with normal T4, T3, and TSH. Plummer syndrome is the development of hyperthyroidism (toxic multinodular goi-ter) late in the course.

The term hyperthyroidism is used when the mean metabolic rate of all cells is increased due to increased T4 or T3. Clinical features include tachycardia and pal-pitations; nervousness and diaphoresis; heat intolerance; weakness and tremors; diarrhea; and weight loss despite a good appetite. Lab studies show elevated free T4.

•         In secondary and tertiary hyperthyroidism, TSH is elevated.

The term hypothyroidism is used when the mean metabolic rate of all cells is decreased due to decreased T4 or T3. Clinical features include fatigue and lethargy; sensitivity to cold temperatures; decreased cardiac output; myxedema (accumulation of proteoglycans and water); facial and periorbital edema; peripheral edema of the hands and feet; deep voice; macroglossia; constipation; and anovulatory cycles. Lab studies show decreased free T4.

•         In secondary and tertiary hypothyroidism, TSH is decreased.

Iatrogenic hypothyroidism is the most common cause of hypothyroidism in the United States, and is secondary to thyroidectomy or radioactive iodine treatment. Treatment is thyroid hormone replacement.

Endemic goiter is due to dietary deficiency of iodine; it is uncommon in the United States.

Hashimoto thyroiditis is a chronic autoimmune disease characterized by immune destruction of the thyroid gland and hypothyroidism. It is the most common noni-atrogenic/nonidiopathic cause of hypothyroidism in the United States; it most com-monly causes painless goiter in females more than males, with peak age 40–65.

Hashimoto thyroiditis is the most common cause of hypothyroidism (due to destruction of thyroid tissue), though the initial inflammation may cause transient hyperthyroidism (hashitoxicosis). Hashimoto may be associated with other autoim-mune diseases (SLE, rheumatoid arthritis, Sjögren syndrome, etc.), and it has an increased risk of non-Hodgkin B-cell lymphoma. Grossly, Hashimoto produces a pale, enlarged thyroid gland; microscopically, it shows lymphocytic inflammation with germinal centers and epithelial “Hürthle cell” changes.

Subacute thyroiditis (also called de Quervain thyroiditis and granulomatous thy-roiditis) is the second most common form of thyroiditis; it affects females more than males, with peak age 30–50. Patients may complain of odynophagia (pain on swallowing).

•         May be accompanied by transient hyperthyroidism

Riedel thyroiditis is a rare disease of unknown etiology, characterized by destruc-tion of the thyroid gland by dense fibrosis and fibrosis of surrounding structures (trachea and esophagus). It affects females more than males, and most patients are middle-aged.

•         Causes an irregular, hard thyroid that is adherent to adjacent structures

•         May clinically mimic carcinoma and present with stridor, dyspnea, or dysphagia

Thyroglossal duct cyst presents as a midline neck mass in a young patient. Its epi-thelium varies with location (squamous/respiratory). It may become infected and painful. Treatment is surgical.

Adenomas: follicular adenoma is the most common. Clinically, adenomas are usu-ally painless, solitary, encapsulated nodules that appear “cold” on thyroid scans. They may be functional and cause hyperthyroidism (toxic adenoma). 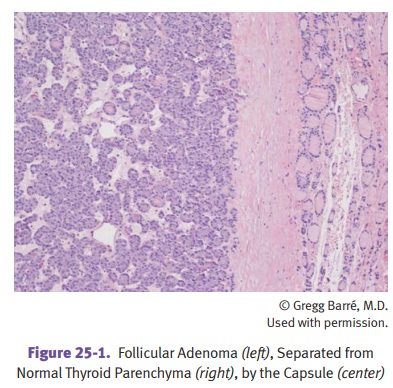 Papillary carcinoma accounts for 80% of malignant thyroid tumors. It affects females more than males, with peak age 20–50. Radiation exposure is a risk factor. Resection is curative in most cases. Radiotherapy with iodine 131 is effective for metastases. The prognosis is excellent, with 20-year survival 90% due to slow growth and metastasis to regional cervical lymph nodes. There are chromosomal rearrangements of the RET oncogene.

Follicular carcinoma accounts for 15% of malignant thyroid tumors. It affects females more than males, with peak age 40–60. Hematogenous metastasis to the bones or lungs is common. These cancers are microscopically distinguished from follicular adenoma by the presence of capsular invasion.

Medullary carcinoma accounts for 5% of malignant thyroid tumors. It arises from C cells (parafollicular cells) and secretes calcitonin. Microscopic exam shows nests of polygonal cells in an amyloid stroma. A minority of cases (25%) is associated with MEN 2 and MEN 3 syndromes, and those cases tend to be multicentric. Activating RET mutations are present in familial and sporadic types.

Anaplastic carcinoma affects females more than males, with peak age >60. It can present with a firm, enlarging, and bulky mass, or with dyspnea and dysphagia. The tumor has a tendency for early widespread metastasis and invasion of the tra-chea and esophagus. Microscopically, the tumor is composed of undifferentiated, anaplastic, and pleomorphic cells. This very aggressive tumor is often rapidly fatal.