Cushing syndrome is characterized by increased levels of glucocorticoids.

Cushing syndrome is characterized by increased levels of glucocorticoids. It is inves-tigated with lab and imaging studies. The most com-mon cause is exogenous glucocorticoid administration.

•         Cushing disease (hypersecretion of ACTH, usually due to a pituitary micro-adenoma) 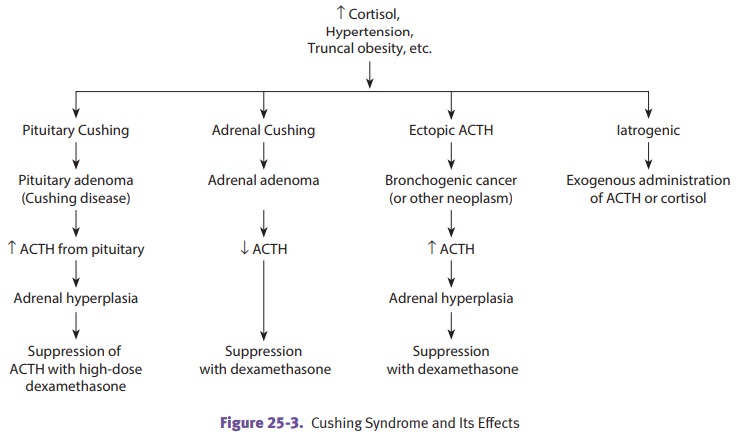 Hyperaldosteronism may cause hypertension and hypokalemia.

°°    Bilateral nodular hyperplasia of the adrenal

Adrenogenital syndromes are adrenal disorders characterized by excess production of androgens and virilization. They are caused either by adrenocortical adenoma/ carcinoma, which produces androgens, or by congenital adrenal hyperplasia, a cluster of autosomal recessive enzyme defects (most common is 21-hydroxylase deficiency).

Addison’s disease (chronic adrenocortical insufficiency) is caused by destruction of the adrenal cortex, leading to a deficiency of glucocorticoids, mineralocorticoids, and androgens. The most common cause is autoimmune adrenalitis, though adrenal involvement by TB or metastatic cancer are other possible causes. Patients present with gradual onset of weakness, skin hyperpigmentation, hypotension, hypoglyce-mia, poor response to stress, and loss of libido. Treatment is steroid replacement.

Secondary adrenocortical insufficiency may be caused by disorders of the hypo-thalamus or pituitary (cancer or infection, for example). Since ACTH levels are low, hyperpigmentation does not occur.

Pheochromocytoma (“dark/dusky-colored tumor”) is an uncommon benign tumor of the adrenal medulla, which produces catecholamines (norepinephrine and epineph-rine). It can present with sustained or episodic hypertension and associated severe headache, tachycardia, palpitations, diaphoresis, and anxiety. Note the rule of 10s:

Urinary vanillylmandelic acid (VMA) and catecholamines are elevated. Microscopi-cally, the tumor shows nests of cells (Zellballen) with abundant cytoplasm. Treat-ment is control of the patient’s BP and surgical removal of the tumor.