The natural changes occuring is explained through the theories of evolution as proposed by Lamarck and Darwin.

Life had evolved along with evolution of earth towards the end of 18th century. Evolution is the gradual change occurring in living organisms over a period of time. Formation of new species due to changes in specific characters over several generations as response to natural selection, is called evolution. The natural changes occuring is explained through the theories of evolution as proposed by Lamarck and Darwin.

Jean Baptiste Lamarck (1744 -1829) was a French naturalist, well known for his theory of evolution. Lamarck’s theory of evolution was published in ‘Philosophic Zoologique’ in the year 1809. It is popularly known as ‘Theory of inheritance of Acquired Characters” or “Use and Disuse theory” or Lamarckism.

iii. Use and disuse theory

Lamarck’s use and disuse theory states that if an organ is used constantly, the organ develops well and gets strengthened. When an organ is not used for a long time, it gradually degenerates.

The ancestors of giraffe were provided with short neck and short forelimbs. Due to shortage of grass, they were forced to feed on leaves from trees. The continuous stretching of their neck and forelimbs resulted in the development of long neck and long forelimbs which is an example for constant use of an organ. The degenerated wing of Kiwi is an example for organ of disuse.

Theory of Inheritance of acquired characters

2. Darwinism or Theory of Natural Selection

Charles Darwin (1809-1882) was one of the great naturalist and philosopher of 18th century. He was born in England in 1809. While studying in college through his friendship with Professor J.S.Henslow he was fascinated towards nature. At that time the British Admiralty planned a voyage of exploration for 5 years on a ship named H.M.S. Beagle around South America. Dr Henslow was asked to nominate a young naturalist for the voyage. Darwin was given the opportunity. During his five years (1831–1835) voyage he visited many parts of the world, a number of islands including the Galapagos island and Pacific island.

Darwin made elaborate observations on nature of the land, plants and animals of the regions he visited. He further worked for a period of 20 years to develop the theory of natural selection. 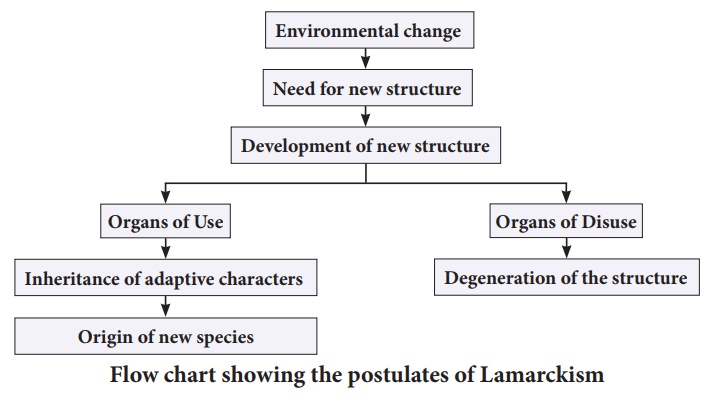 Darwin published his observations and conclusions under the name ‘Origin of species’ in 1859. The book of Darwin demonstrates the fact of evolution. It elaborates on the theory of Natural selection for evolutionary transformation,

Living beings have the ability to reproduce more individuals and form their own progeny. They have the capacity to multiply in a geometrical manner. This will increase reproductive potential leading to overproduction.

Due to over production, a geometric ratio of increase in population occurs. The space to live and food available for the organisms remain the same. This creates an intense competition among the organisms for food and space leading to struggle. The struggle for existence are of three types:

a. Intraspecific struggle: Competition among the individuals of same species.

b. Interspecific struggle: Competition between the organisms of different species living together.

c. Environmental struggle:     Natural conditions like extreme heat or cold, drought and floods can affect the existence of organisms

iv. Survival of the fittest or Natural selection During the struggle for existence, the organisms which can overcome the challenging situation, survive and adapt to the surrounding environment.

Organisms which are unable to face the challenges, are unfit to survive and disappear. The process of selection of organisms with favourable variation is called as natural selection. 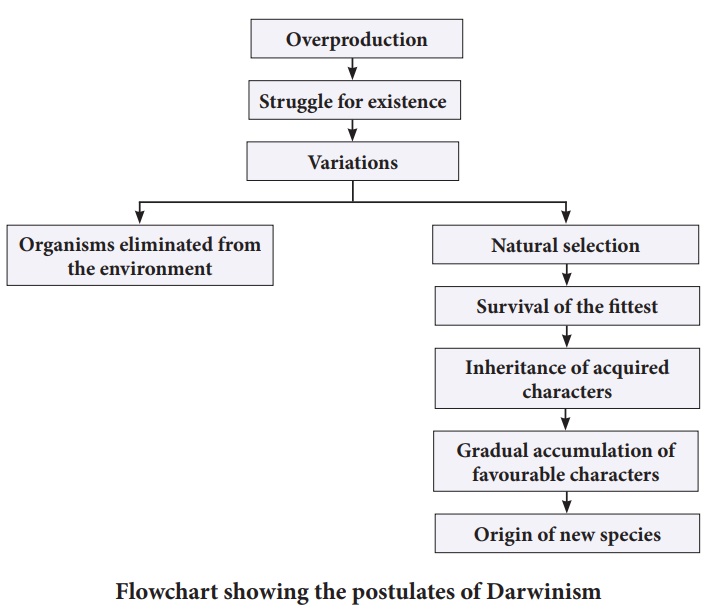 According to Darwin, new species originates by the gradual accumulation of favourable variations for a number of generations.