Home | | Introduction to Human Nutrition | The use of reference values to assess the adequacy of the nutrient intakes of population groups
Posted On :  11.07.2017 02:33 pm

Ideally, this is accomplished by discovering the distri-bution of intakes of a nutrient in the population group (e.g., by carrying out a dietary survey), and comparing these intakes with the distribution of requirements for that nutrient within the same population.

Ideally, this is accomplished by discovering the distri-bution of intakes of a nutrient in the population group (e.g., by carrying out a dietary survey), and comparing these intakes with the distribution of requirements for that nutrient within the same population. In practice, reliable data with which to plot the second of these distributions have rarely been col-lected, and therefore what must be used is an estima-tion of the average requirement together with an esti-mation of the variance in that requirement, i.e., the standard deviation (based on whatever scientific evi-dence is available), that is used to plot the population distribution of requirements as shown in Figure 7.1. 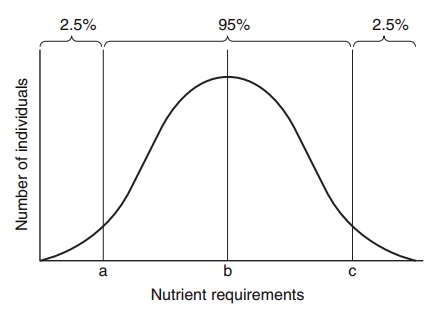 Figure 7.1 Frequency distribution of individual requirements for a nutrient. (a) The mean minus a notional 2 standard deviations (SDs); intakes below this will be inadequate for nearly all of the population. (b) The mean; the midpoint of the population’s requirement. (c) The mean plus a notional 2 SDs; the intake that is adequate for nearly all of the population. Note that, in practice, because insufficient data exist to establish reliable means and SDs for many nutrient requirements, the reference intakes describing the points a and c on the curve are generally set, in the case of a, at the level that is judged to prevent the appearance of signs of deficiency (biochemical or clinical), and, in the case of c, at the level above which all individuals appear to be adequately supplied. Thus, it is unlikely that even 2.5% of the popula-tion would not achieve adequacy at intake level c.

When considering how to assess the adequacy of nutrient intakes of populations it is important to compare the intakes with the most appropriate level of requirement as defined in dietary recommendations.

It is not useful to compare usual intakes with the RDA (PRI, RNI, i.e., the average requirement plus a notional 2 SDs) at the population level since this approach leads to overestimates of the prevalence of inadequacy. (It may, however, be justified to compare an individual’s intake with the RDA.) Furthermore, this approach might be seen to encourage the con-sumption of higher intakes, which could be toxic in the case of certain nutrients.

The lowest defined intake level [lowest threshold intake (LTI), lower reference nutrient intake (LRNI), i.e., the average requirement minus a notional 2 SDs] is not regarded as being useful in the context of assess-ing the adequacy of population nutrient intakes. This is because it would identify only those individuals who were almost certainly not meeting their require-ment, and by the same token would omit to include many in the population who would be at appreciable risk of nutrient inadequacy (in other words, those whose intake was below the average requirement).

Finally, the tolerable upper levels of intake defined for certain nutrients can also be used as cut-off points to identify those individuals at risk of consuming toxic levels of a nutrient.