Chapter: The Diversity of Fishes: Biology, Evolution, and Ecology: Introduction

The science of ichthyology

Fishes make up more than half of the 55,000 species of living vertebrates. Along with this remarkable taxonomic diversity comes an equally impressive habitat diversity.

Fishes make up more than half of the 55,000 species of living vertebrates. Along with this remarkable taxonomic diversity comes an equally impressive habitat diversity. Today, and in the past, fishes have occupied nearly all major aquatic habitats, from lakes and polar oceans that are ice-covered through much of the year, to tropical swamps, temporary ponds, intertidal pools, ocean depths, and all the more benign environments that lie within these various extremes. Fishes have been ecological dominants in aquatic habitats through much of the history of complex life. To colonize and thrive in such a variety of environments, fishes have evolved obvious and striking anatomical, physiological, behavioral, and ecological adaptations. Students of evolution in general and of fish evolution in particular are aided by an extensive fossil record dating back more than500 million years. All told, fishes are excellent showcases of the evolutionary process, exemplifying the intimate relationship between form and function, between habitat and adaptation.

What is a fish?

It may in fact be unrealistic to attempt to define a “fish”, given the diversity of adaptation that characterizes the thousands of species alive today, each with a unique evolutionary history going back millions of years and including many more species. Recognizing this diversity, one can define a fish as “a poikilothermic, aquatic chordate with appendages (when present) developed as fins, whose chief respiratory organs are gills and whose body is usually covered with scales” (Berra 2001, p. xx), or more simply, a fish is an aquatic vertebrate with gills and with limbs in the shape of fins (Nelson 2006). To most biologists, the term “fish” is not so much a taxonomic ranking as a convenient description for aquatic organisms as diverse ashag fishes, lampreys, sharks, rays, lungfishes, sturgeons, gars, and advanced ray-finned fishes.

Definitions are dangerous, since exceptions are often viewed as falsifications of the statement (see, again, Berra 2001). Exceptions to the definitions above do not negate them but instead give clues to adaptations arising from particularly powerful selection pressures. Hence loss of scales and fins in many eel-shaped fishes tell us something about the normal function of these structures and theirin appropriateness in benthic fishes with an elongate body. Similarly, homeothermy in tunas and lamnid sharks instructsus about the metabolic requirements of fast-moving predatorsin open sea environments, and lungs or other accessory breathing structures in lungfishes, gars, African catfishes, and gouramis indicate periodic environmental conditions where gills are inefficient for transferring water-dissolved oxygen to the blood. Deviation from “normal” in these and other exceptions are part of the lesson that fishes have to teach us about evolutionary processes.

The diversity of fishes

Numerically, valid scientific descriptions exist for approximately27,977 living species of fishes in 515 families and62 orders (Nelson 2006; W. Eschmeyer pers. comm.; Table1.1) (note: “fish” is singular and plural for a single species, “fishes” is singular and plural for more than one species; see Fig. 1.1). Of these, 108 are jawless fishes (70 hagfishes and 38 lampreys); 970 are cartilaginous sharks (403), skates and rays (534), and chimaeras (33); and the remaining26,000+species are bony fishes; many others remain to be formally described. 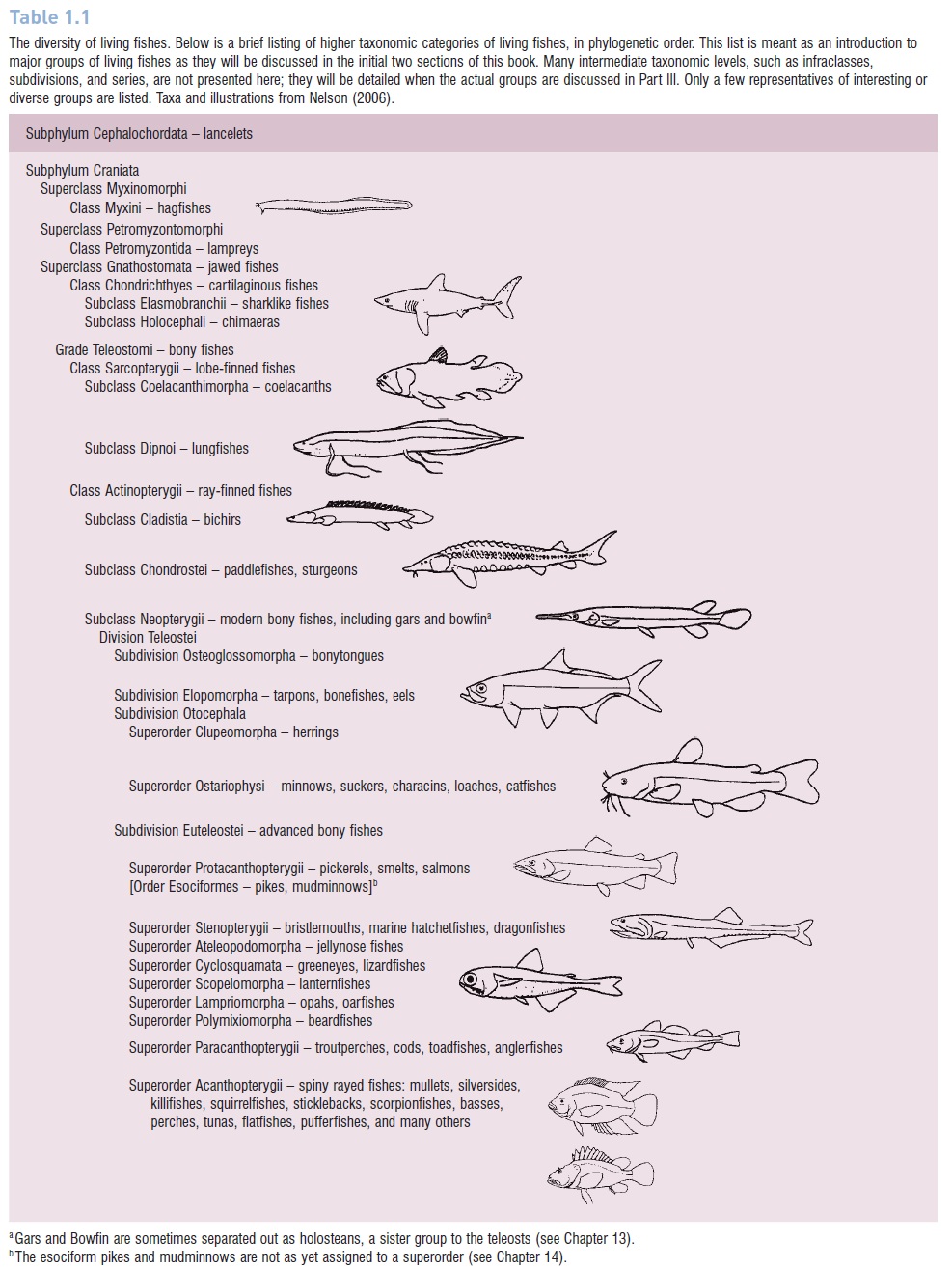 When broken down by major habitats,41% of species live in fresh water, 58% in sea water, and 1% move between fresh water and the sea during their life cycles (Cohen 1970). Geographically, the highest diversities are found in the tropics. The Indo-West Pacific area that includes the western Pacific and Indian oceans and the Red Sea has the highest diversity for a marine area, whereas South America, Africa, and Southeast Asia, in that order, contain the most freshwater fishes (Berra2001; Leveque et al. 2008). Fishes occupy essentially all aquatic habitats that have liquid water throughout they ear, including thermal and alkaline springs, hypersaline lakes, sunless caves, anoxic swamps, temporary ponds, torrential rivers, wave-swept coasts, and high-altitude and high-latitude environments. The altitudinal record is set by some nemacheiline river loaches that inhabit Tibetan hot springs at elevations of 5200 m. The record for unheated waters is Lake Titicaca in northern South America, where pup fishes live at an altitude of 3812 m. The deepest living fishes are cusk-eels, which occur 8000 m down in the deep sea. 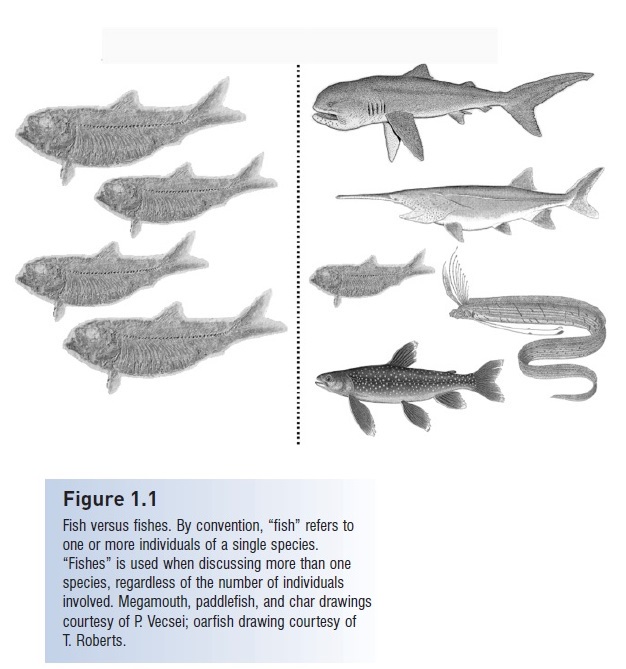 Variation in body length ranges more than 1000-fold.The world’s smallest fishes – and vertebrates – mature ataround 7–8 mm and include an Indonesian minnow,Paedocyprisprogenetica, and two gobioids, Trimmatom nanusfrom the Indian Ocean and Schindleria brevipinguis from Australia’s Great Barrier Reef (parasitic males of a deepseaangler fish Photocorynus spiniceps mature at 6.2 mm, although females are 10 times that length). The world’s longest cartilaginous fish is the 12 m long (or longer) Whale Shark Rhincodon typus, whereas the longest bony fish is the8 m long (or longer) Oarfish Regalecus glesne. Body masses top out at 34,000 kg for whale sharks and 2300 kg for the Ocean Sunfish Mola mola. Diversity in form includes relatively fish like shapes such as minnows,  trouts, perches, basses, and tunas, but also such unexpected shapes as box like trunkfishes, elongate eels and catfishes, globoselump suckers and frogfishes, rectangular ocean sunfishes, question-mark-shaped seahorses, and fl attened and circular flat fishes and batfishes, ignoring the exceptionally bizarre fishes of the deep sea.