The Inquests Act provides, inter alia, for ``holding of inquests in cases of deaths or alleged deaths apparently occurring from other than natural causes, and for matters incidental thereto ...''

The Inquests Act provides, inter alia, for ``holding of inquests in cases of deaths or alleged deaths apparently occurring from other than natural causes, and for matters incidental thereto ...''

How does the inquest court come to know of an alleged non-natural death?

Where a medical practitioner is unable to certify that the death of his patient (or other person) was solely and exclusively due to natural causes, he isThis section is based on Smith (1986) and Strauss (1991:424).required to inform a policeman accordingly. In such cases the doctor does not issue a death certificate. The police will inform a magistrate accordingly, who will request the police to investigate the matter. The police will then report to the public prosecutor.

Any policeman who has reason to believe that any person had died ... from other than a natural cause shall investigate the circumstances of the death or alleged death.

The magistrate to whom the death is reported must, if he deems it expedient in the interests of justice, cause it to be examined by a medical practitioner (eg a forensic pathologist) ``who may, if he deems it necessary for the purpose of ascertaining with greater certainty the cause of death make or cause to be made an examination of any internal organ, or any part or any contents of the body, or any other substance or thing''. For the purpose of this examination ``any part or internal organ or contents of a body may be removed'' and ``removed to any place''.

If the pathologist or any medical practitioner has been involved in the treatment of the deceased before death, it is the policy of the Department of Health that he should advise the magistrate accordingly so that he can seek the assistance of another pathologist or medical practitioner in order to conduct the post-mortem examination. In practice he will generally consult with the forensic consultant, in other words the chief pathologist for the region.

The extent and nature of the post-mortem examination is not prescribed by statute, but the medical practitioner undertaking this task would be well advised to follow with discretion the procedure as laid out in the report form provided for this purpose.

Who may be present at the post-mortem examination?

A police officer or another medical practitioner nominated by any person, who satisfies the magistrate that he has a ``substantial and peculiar interest in the issue of the examination may be present at the post-mortem examination, as well as any other person permitted by the magistrate or the medical practitioner conducting the post-mortem examination''. The attendance of students is included in the latter provision. The doctor performing the autopsy should welcome the presence of a colleague, who may be appointed by the relatives to represent their interests, as he should have nothing to hide, and a second opinion is generally helpful (Strauss 1991:424).

Report of the examination

The findings at an autopsy, which are recorded as the autopsy is done, are generally later transcribed on the prescribed form, with (it is hoped) meticulous attention to relevant factual detail and accuracy; these findings represent the personal factual observations of the medical practitioner performing the examination (Nel 1986:5).

In terms of the Inquests Act the judicial officer shall record a finding on the following:

If the judicial officer is unable to record any such finding she shall record that fact. It should be appreciated that the evidence which justifies a finding of a likely cause of death may not stand the test of a criminal trial or a civil action.

Both competent medical acts and omissions may result in a death (eg death during a heart transplant operation or following failure to institute specific treatment in a case of cerebral haemorrhage), but such an act or omission need not constitute an offence in the sense of criminal negligence.

If the body has been destroyed (eg by cremation) or if no body can be recovered (eg in a sea disaster) and if the evidence proves beyond reasonable doubt that the person has died, the judicial officer shall accordingly record a finding of death and then proceed to make a finding as in the case of all inquests.

At the termination of the inquest the judicial officer is required to submit the record to the Director of Public Prosecution in the following circumstances:

The Director of Public Prosecutions has the powers to re-open an inquest or to permit exhumation of a body for further investigation. 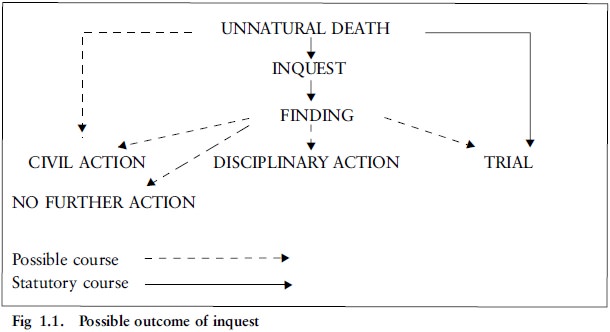 How do the findings affect the medical practitioner?

Trust not the physician

His antidotes are poison,

and he slays more than you rob.

One may often have heard the above. However ... ``we cannot freely and wisely choose the right way for ourselves unless we know both good and evil'' (Helen Keller).

If the finding in any way reflects adversely on a medical practitioner, criminal and/or civil action or a disciplinary inquiry by the Health Professions Council of South Africa may ensue (fig 1.1).

An inquest can often help to identify the medical ``good and evil'' because not infrequently it has a major medical component which may reveal or conversely justify apparent medical shortcomings, and so play an important role as an external audit of the quality of medical care. Consequently the events leading up to inquests, the evidence and procedure, the findings and the possible consequences arising from the findings should be of interest to medical practice in its broadest sense, and should not be restricted only to the forensic medical practitioner.

It is important that people develop a knowledge of and interest in medical jurisprudence, particularly in the light of the disturbing world-wide trends towards litigation against doctors and hospitals, and also because patients are (rightly so) becoming more aware of what can legitimately be expected as ``reasonably competent'' attention in the various categories of medical medicine.

General reasons for censure of the medical practitioner at an inquest

The major cause for censure of the medical practitioner can be summed up in the words ``failure to ...''. This may either be the failure to institute acceptable treatment of the patient, or failure to adhere to ethical norms.

The following questions need to be asked by the doctor preparing to give evidence on a particular form of treatment: