The Wind on Haunted Hill: Section I

a. Underline the words or phrases that tell you what the wind does to the village.

b. Write the names of the characters in this story.

WHO - Whoo, Whooo, cried the wind as it swept down from the Himalayan snows. It hurried over the hills and passes, and hummed and moaned in the tall pines and deodars.

On Haunted Hill there was little to stop the wind–only a few stunted trees and bushes, and the ruins of what had once been a small settlement.

On the slopes of the next hill there was a small village. People kept large stones on their tin roofs to prevent them from blowing away. There was nearly always a wind in these parts. Even on sunny days, doors and windows rattled, chimneys choked, clothes blew away.

Three children stood beside a low stone wall, spreading clothes out to dry. On each garment they placed a rock. Even then the clothes fluttered like flags and pennants.

Usha, dark haired and rose cheeked, struggled with her grandfather’s long loose shirt. She was eleven or twelve. Her younger brother, Suresh, was doing his best to hold down a bed-sheet while Binya, a slightly older girl, Usha’s friend and neighbour, was handing them the clothes, one at a time. 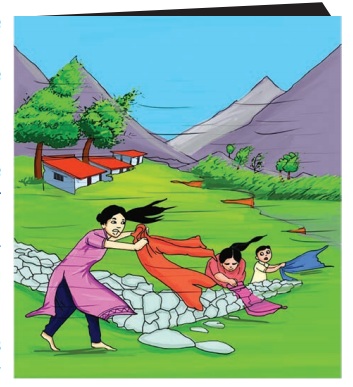 Once they were sure everything was on the wall, firmly held down by rocks, they climbed up on the flat stones and sat there for a while, in the wind and the sun, staring across the fields at the ruins on Haunted Hill.

‘I must go to the bazaar today,’ said Usha.

‘I wish I could come too,’ said Binya. ‘But I have to help with the cows and the housework. Mother isn’t well.’

‘I can come!’ said Suresh. He was always ready to visit the bazaar, which was three miles away, on the other side of Haunted Hill.

‘No, you can’t,’ said Usha. ‘You must help Grandfather chop wood.’

Their father was in the army, posted in a distant part of the country, and Suresh and his grandfather were the only men in the house. Suresh was eight, chubby and almond-eyed.

‘Won’t you be afraid to come back alone?’ he asked.

‘Why should I be afraid?’

‘There are ghosts on the hill.’

‘I know, but I will be back before it gets dark. Ghosts don’t appear during the day.’

‘Are there many ghosts in the ruins?’ asked Binya.

‘Grandfather says so. He says that many years ago – over a hundred years ago – English people lived on the hill. But it was a bad spot, always getting struck by lightning, and they had to move to the next range and build another place.’

‘But if they went away, why should there be any ghosts?’

‘Because – Grandfather says – during a terrible storm one of the houses was hit by lightning and everyone in it was killed. Everyone, including the children.’

‘Were there many children?’

‘There were two of them. A brother and sister. Grandfather says he has seen them many times, when he has passed through the ruins late at night. He has seen them playing in the moonlight.’

Usha set out on her walk to the bazaar at two in the afternoon. It was about an hour’s walk. She went through the fields, now turning yellow with flowering mustard, then along the saddle of the hill, and up to the ruins.

The path went straight through the ruins. Usha knew it well; she had often taken it while going to the bazaar to do the weekly shopping, or to see her aunt who lived in the town. 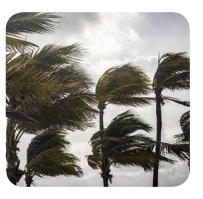 Wild flowers grew in the crumbling walls. A wild plum tree grew straight out of the floor of what had once been a large hall. Its soft white blossoms had begun to fall. Lizards scuttled over the stones, while a whistling-thrush, its deep purple plumage glistening in the soft sunshine, sat in an empty window and sang its heart out.

Usha sang to herself, as she tripped lightly along the path. Soon she had left the ruins behind. The path dipped steeply down to the valley and the little town with its straggling bazaar.

Usha took her time in the bazaar. She bought soap and matches, spices and sugar (none of these things could be had in the village, where there was no shop), and a new pipe stem for her grandfather’s hookah, and an exercise book for Suresh to do his sums in. As an afterthought, she bought him some marbles. Then she went to a mochi’s shop to have her mother’s slippers repaired. The mochi was busy, so she left the slippers with him and said she’d be back in half an hour.

She had two rupees of her own saved up, and she used the money to buy herself a necklace of amber-coloured beads from an old Tibetan lady who sold charms and trinkets from a tiny shop at the end of the bazaar.

Usha met her Aunt Lakshmi, who took her home for tea.

Usha spent an hour in Aunt Lakshmi’s little flat above the shops, listening to her aunt talk about the ache in her left shoulder and the stiffness in her joints. She drank two cups of sweet hot tea, and when she looked out of the window she saw that dark clouds had gathered over the mountains.

Usha ran to the cobbler’s and collected her mother’s slippers. The shopping bag was full. She slung it over her shoulder and set out for the village.

Work in pairs. Read the story above and find the answers to these questions.

1. What were the children doing beside the stone wall?

Beside the stone wall the children were spreading clothes out to dry.

Suresh asked Usha whether he could go with her to the bazaar. Usha was going all alone to the bazaar. She had to cross the Haunted Hill on the way. So he asked that question to Usha.

3. Who told the children the story about the ghosts on Haunted Hill?

Their grandfather told the children about the ghosts on Haunted Hill.

4. What did Usha see while walking to the bazaar?

Usha went through the fields. She saw the yellow mustard flowers. She saw wild flowers growing in the walls of the house in ruins. She saw a wild plum tree with its white flowers scattered beneath the tree. Lizards were scuttling over the stones. A whistling thrush was singing its heart out.

5. saddle - low point on a ridge between two summits

9. straggling - spreading out in different directions