Usha’s heart was in her mouth. She had seen, without a shadow of a doubt, two ghostly creatures at the other side of the room, and she wasn’t going to remain in that ruined building a minute longer.

She ran out of her corner, ran towards the big gap in the wall through which she had entered. She was halfway across the open space when something – someone – fell against her. She stumbled, got up and again bumped into something. She gave a frightened scream. Someone else screamed. And then there was a shout, a boy’s shout, and Usha instantly recognized the voice.

They fell into each other’s arms, so surprised and relieved that all they could do was laugh and giggle and repeat each other’s names.

Then Usha said, ‘I thought you were ghosts.’

‘We thought you were a ghost!’ said Suresh.

‘Come back under the roof,’ said Usha.

They huddled together in the corner chattering excitedly. 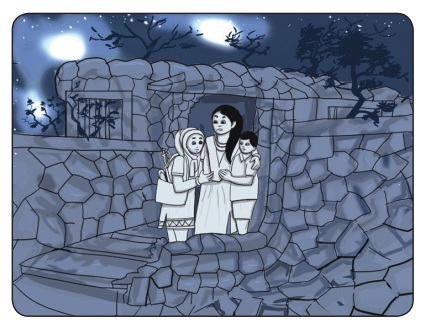 ‘When it grew dark, we came looking for you,’ said Binya. ‘And then the storm broke.’

‘Shall we run back together?’ asked Usha. ‘I don’t want to stay here any longer.’

‘We’ll have to wait,’ said Binya. ‘The path has fallen away at one place. It won’t be safe in the dark, in all this rain.’

‘Then we may have to wait till morning,’ said Suresh. ‘And I’m feeling hungry!’

The wind and rain continued, and so did the thunder and lightning, but they were not afraid now. They gave each other warmth and confidence. Even the ruins did not seem so forbidding.

After an hour the rain stopped, and although the wind continued to blow, it was now taking the clouds away, so that the thunder grew more distant. Then the wind too moved on, and all was silent. Towards dawn the whistling-thrush began to sing. Its sweet broken notes flooded the rain washed ruins with music.

As it grew lighter, they saw that the plum tree stood upright again, although it had lost all its blossoms. They stood outside the ruins, on the brow of the hill, watching the sky grow pink. A light breeze had sprung up.

When they were some distance from the ruins, Usha looked back and said, ‘Can you see something there, behind the wall? It’s like a hand waving.’

‘I can’t see anything,’ said Suresh.

‘It’s just the top of the plum tree,’ said Binya.

They were on the path leading across the saddle of the hill.

Voices on the wind.

‘I heard someone calling.’

Usha looked back at the ruins. The sun had come up and was touching the top of the walls. The leaves of the plum tree shone. The thrush sat there, singing.

Usha heard them calling. Or was it just the wind?

Discuss with your partner and complete the table. 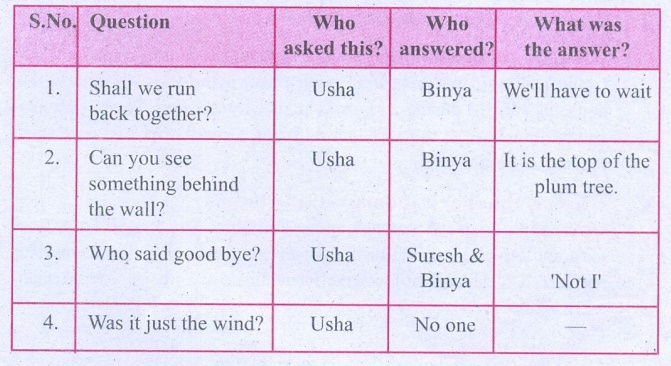