Strangely, the wind had dropped. The trees were still, not a leaf moved. The crickets were silent in the grass. The crows flew round in a circle, then settled down for the night in an oak tree.

‘I must get home before dark,’ said Usha to herself, as she hurried along the path. But already the sky was darkening. The clouds, black and threatening, looked over Haunted Hill. This was March, the month for storms.

A deep rumble echoed over the hills, and Usha felt the first heavy drop of rain hit her cheek.

She had no umbrella with her; the weather had seemed so fine just a few hours ago. Now all she could do was tie an old scarf over her head, and pull her shawl tight across her shoulders. Holding the shopping bag close to her body, she quickened her pace. She was almost running. But the raindrops were coming down faster now. Big, heavy pellets of rain.

A sudden flash of lightning lit up the hill. The ruins stood out in clear outline. Then all was dark again. Night had fallen.

‘I won’t get home before the storm breaks,’ thought Usha. ‘I’ll have to shelter in the ruins.’ She could only see a few feet ahead, but she knew the path well and she began to run.

Suddenly, the wind sprang up again and brought the rain with a rush against her face. It was cold, stinging rain. She could hardly keep her eyes open.

The wind grew in force. It hummed and whistled. Usha did not have to fight against it. It was behind her now, and helped her along, up the steep path and on to the brow of the hill.

There was another flash of lightning, followed by a peal of thunder. The ruins looked up before her, grim and forbidding.

She knew there was a corner where a piece of old roof remained. It would give some shelter. It would be better than trying to go on. In the dark, in the howling wind, she had only to stay off the path to go over a rocky cliff edge.

Who – whoo – whooo, howled the wind. She saw the wild plum tree swaying, bent double, its foliage thrashing against the ground. The broken walls did little to stop the wind.

Usha found her way into the ruined building, helped by her memory of the place and the constant flicker of lightning. She began moving along the wall, hoping to reach the sheltered corner. She placed her hands flat against the stones and moved sideways. Her hand touched something soft and furry. She gave a startled cry and took her hand away. Her cry was answered by another cry – half snarl, half screech – and something leapt away in the darkness.

It was only a wild cat. Usha realized this when she heard it. The cat lived in the ruins, and she had often seen it. But for a moment she had been very frightened. Now, she moved quickly along the wall until she heard the rain drumming on the remnant of the tin roof.

Once under it, crouching in the corner, she found some shelter from the wind and the rain. Above her, the tin sheets groaned and clattered, as if they would sail away at any moment. But they were held down by the solid branch of a straggling old oak tree.

Usha remembered that across this empty room stood an old fireplace and that there might be some shelter under the blocked-up chimney. Perhaps it would be drier than it was in her corner; but she would not attempt to find it just now. She might lose her way altogether.

Her clothes were soaked and the water streamed down from her long black hair to form a puddle at her feet. She stamped her feet to keep them warm. She thought she heard a faint cry - was it the cat again, or an owl? – but the sound of the storm blotted out all other sounds.

There had been no time to think of ghosts, but now that she was in one place, without any plans for venturing out again, she remembered Grandfather’s story about the lightning - blasted ruins. She hoped and prayed that lightning would not strike her as she sheltered there.

Thunder boomed over the hills, and the lightning came quicker now, only a few seconds between each burst of lightning.

Then there was a bigger flash than most, and for a second or two the entire ruin was lit up. A streak of blue sizzled along the floor of the building, in at one end and out at the other. Usha was staring straight ahead. As the opposite wall was lit up, she saw, crouching in the disused fireplace, two small figures – they could only have been children!

The ghostly figures looked up, staring back at Usha. And then everything was dark again.

Two scary events from this section are listed here. Write the events that take place in between in the correct order.

7. groaned and clattered - banged together and made a loud noise

11. sizzled - hissed like something hot on a frying pan 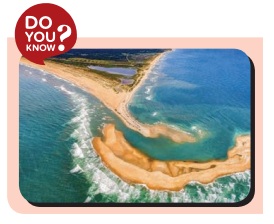 The Bermuda Triangle is one of the greatest unsolved mysterious spots in the world. It is a triangular shaped area in the North Atlantic Ocean. Hundreds of people and numerous boats, ships and planes have disappeared inside this triangle. The reason for these disappearances still remains a mystery.