The Policy Factors that Helped the Industrialisation Process in Tamil Nadu

The Policy Factors that Helped the Industrialisation Process in Tamil Nadu

Industries require skilled human resources. Apart from a lot of attention to primary education to promote literacy and basic arithmetic skills, the state is known for its vast supply of technical human resources. It is hometo one of the largest number of engineering colleges, polytechnics and Industrial TrainingCentres in the country.

The widespread diffusion of electrificationhas contributed to the spread of industrialization to smaller towns and villages in the state. Alongwith electrification, Tamil Nadu is known for its excellent transport infrastructure, especiallyminor roads that connect rural parts of the state to nearby towns and cities. A combination of public and private transport has also facilitated rural to urban connectivity and therefore connect small producers to markets better.

Technology sectors have been formulated inthe post reform period. In addition, the state has put in place several industrial promotionagencies for both large enterprises and the small and medium segments, as well as to providesupporting infrastructure.

SIPCOT (StateIndustries Promotion Corporation of Tamil Nadu) - was formed in the year 1971 to promote industrial growth inthe state by setting up industrial estates. 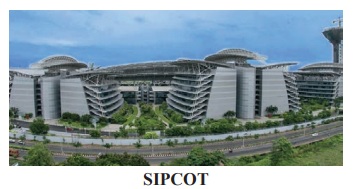 TANSIDCO (Tamil Nadu Small Industries Development Corporation) - is a state-agen-cy of the state of Tamil Nadu established in the year 1970 to promote small-scale industries in the state. It gives subsidies and provide techni-cal assistance for new firms in the small scale sector.

TIDCO (Tamil Nadu Industrial Development Corporation), 1965 - is another government agency to promote industries in the state and to establish industrial estates.

TANSI (Tamil Nadu Small Industries Corporation Ltd.), 1965 - It is supposed to be the first industrial corporation operating in the domain for small enterprises.

Though Tamil Nadu has emerged as a relatively highly industrialised state in the country, the state faces a few issues in sustaining the process. To begin with, some clusters, especially chemicals, textiles and leather clusters, tend to generate a lot of polluting effluents that affect health. The effluents also pollute water bodies into which effluents are let into and also adjoining agricultural lands. Second, employment generation potential has declined because of use of frontier technologies because of the need to compete globally. Quality of employment also has suffered in recent years as most workers are employed only temporarily.

A policy was introduced in April 2000 for the settling up of special Economic Zones in the country with a view to a hassle-free environment for exports.

MEPZ is a Special Economic Zone in Chennai. It is one of the seven export processing zones in the country set up the central government. It was established in 1984 to promote foreign direct investment, enhance foreign exchange earnings and create greater employment opportunities in the region. The MEPZ headquarters is located on GST Road in Tambaram, Chennai.

Startup India Scheme is an initiative of the Indian government, the primary objective of which is the promotion of startups, generation of employment and wealth creation.

Standup India Scheme is to facilitate bank loans between ₹10 lakh and ₹1 crore to at least one Scheduled Caste (SC) or Scheduled Tribe (ST) borrower and one woman borrower per bank branch for setting up a greenfield enterprise.