In 1982, human insulin was marketed as the first recombinant DNA-derived protein for human use.

In 1982, human insulin was marketed as the first recombinant DNA-derived protein for human use. Since then dozens of recombinant proteins have been introduced and some of these products such as the interferons and the epoetins are among the most widely used drugs in the world. And, although these proteins were developed as close copies of human endogenous proteins, nearly all these proteins induce antibodies, sometimes even in a majority of patients (Table 1). In addition, most of these products are used in patients who do not have an innate deficiency and can be assumed to have immune tolerance to the protein. 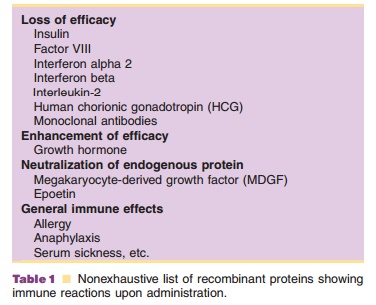 The initial assumption was that the production by recombinant technology in nonhuman host cells and the downstream processing modified the proteins and the immunological response was the classical response to a foreign protein. However, according to the current opinion the antibody response to human homologues is based on breaking B-cell tolerance. This phenomenon is not yet completely understood but is clearly different from the vaccine type of reaction seen with foreign proteins.

The clinical manifestations of both types of reaction are very different. The vaccine-type response occurs within weeks and sometimes a single injection is sufficient to induce a substantial antibody response. In general high levels of neutralizing antibodies are induced and a rechallenge leads to a booster reaction, indicating a memory response.

However, breaking B-cell tolerance takes in general 6 to 12 months of chronic treatment and often only leads to the production of binding antibodies with no biological effect. The antibodies often dis-appear shortly after treatment has been stopped and sometimes even during treatment. This response also appears to have no memory, because rechallenging patients in whom the antibody levels have declined does not induce a response.