The therapeutic proteins currently available cover the whole spectrum, from completely foreign, like bacter-ial-derived asparaginase to completely human-like interferon a-2a and everything in between.

The therapeutic proteins currently available cover the whole spectrum, from completely foreign, like bacter-ial-derived asparaginase to completely human-like interferon a-2a and everything in between. The foreign protein elicits antibodies by the classical pathway which includes ingestion and cleaving of the proteins into peptides by macrophages and dendritic cells, presentation of peptides by the MHC-II system and activation of B-cells and boosting, and affinity maturation and isotype switching of the B-cells by helper T-cells. Furthermore, memory B-cells are induced.

It is much less clear how B-cell tolerance is broken. There are always autoreactive B-cells present. When the receptor on these B-cells meets its epitope on the protein in solution, this interaction does not lead to activation. When these B-cells meet their epitope in a regularly repeated form, then the B-cell receptor oligomerizes and the cell is activated, and starts to divide and produce antibodies. So, B-cells can recognize three-dimensional repeated protein struc-tures as has been shown experimentally in a number of studies. The explanation why is based on evolution. The only naturally occurring, narrowly spaced re-peated protein structures are found on the surface of viruses and some bacterial structures (Bachmann et al., 1993). Apparently, the B-cell system was also selected for its potential to respond to microbial structures independent of the system which discrimi-nates self from nonself.

This explanation of nonself-independent re-sponse by repeated protein structures fits nicely with aggregates being recognized as the main driver of an autoreactive response by human therapeutic proteins, because in protein aggregates certain structures are also presented in a repeated form (Fig. 1) (Moore and Leppert, 1980). 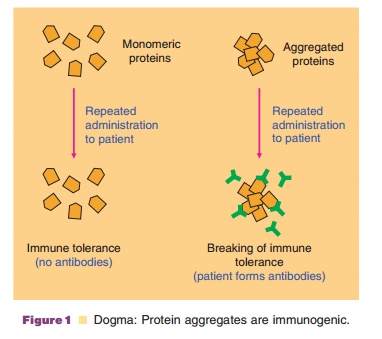 Thus, the initial activation of B-cells by aggre-gates can be explained and also how these cells start with producing IgM. It is not known how the isotype switching from IgM to IgG occurs. Some studies suggest that aggregates after reacting with the B-cell receptor are internalized. And by internalizing, the B-cells become helper cells and start to produce cytokines which will activate other B-cells. Others claim that helper T-cells are involved. However, studies to show the presence of specific T-cell activity in patients producing antibodies to human therapeu-tic proteins have failed. In addition, a T-cell indepen-dent mechanism is suggested by the lack of any association with HLA-type and the absence of memory.