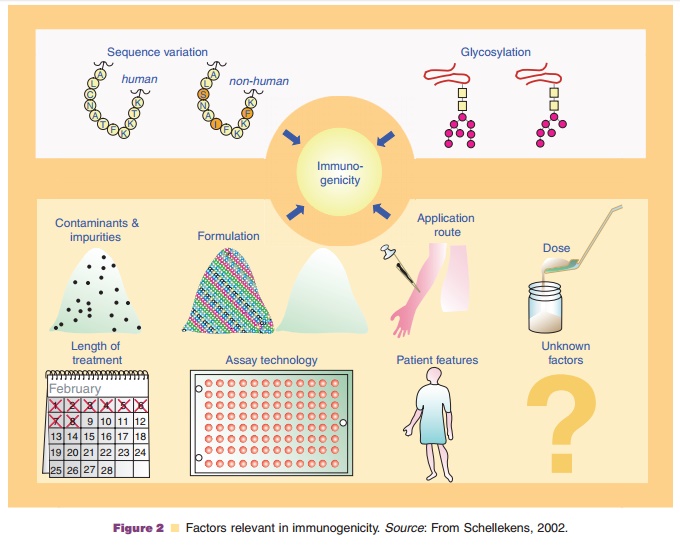 The degree of nonself and presence of aggregates are the initial triggers of an antibody response to a therapeutic protein. The degree of nonself necessary to induce a vaccine-type response is highly dependent on the protein involved and the site of the divergence from the natural sequence of the endogenous protein. For insulin there are single mutations which lead to a new epitope and an antibody response while other mutations have no influence at all. Consensus inter-feron a in which more than 10% of the amino acids diverge from the nearest naturally occurring interfer-on a subtype shows not more immunogenicity than the interferon a-2 homologue. 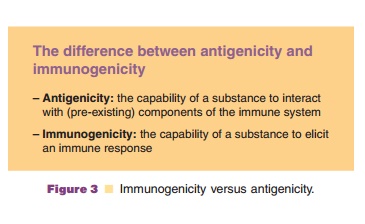 Glycosylation is another important structural factor for the immunogenicity of therapeutic proteins. There is little evidence that modified glycosylation, e. g., by expressing human glycoproteins in plant cells or other nonhuman eukaryotic hosts, may induce an immunogenic response. However, the level of glyco-sylation has a clear effect. Interferon b produced in Escherichia coli is much more immunogenic than the same product produced in mammalian cells. The explanation is the lower solubility causing aggrega-tion in the nonglycosylated E. coli product. Glycosylation is also reported to influence antigeni-city by antibody binding. Nonglycosylated epoetin was reported to have a higher affinity to antibodies than epoetin with a normal level of glycosylation; the opposite has been shown for epoetin engineered to have extra glycosylation. However, such data shouldbe interpreted with caution. Antigenicity does not equal immunogenicity (Fig. 3). A protein or peptide with a high affinity for antibodies may not be able to induce antibodies at all.

Impurities are apparently important factors in the immunogenicity of therapeutic proteins. Substances like host cell components, resins from chromatographiccolumns, or enzymes used to activate the product and monoclonal antibodies used for affinity purification may end up in the final product. Impurities may also be introduced by the components of the formulation or may leak from the container and sealing of the product. These impurities may boost an immune response, although they are not capable of initiating an immune response to the therapeutic protein. However, these products may be immunogenic by themselves. Antibodies induced by impurities may lead to general immune reactions as skin reactions, allergies, anaphy-laxis, and serum sickness. Antibodies to impurities also raise quality issues concerning the product and there-fore need to be monitored.

Interestingly, there are a number of examples of products declining in immunogenicity over the years because of improvements in the purification and other downstream processing steps. Impurities may en-hance immunogenicity via different mechanisms. Endotoxin from the bacterial host cells has been reported to cause the immunogenicity of the first recombinant DNA-derived human growth hormones. G-C rich bacterial host cell DNA and denatured proteins are capable of activating Toll-like receptors and can also act as adjuvants. The activity of these impurities, however, is restricted to the nonhuman proteins which have a vaccine-like activity.

Adjuvants are incapable of boosting the immune response based on T-cell independent breaking of B-cell tolerance. However, impurities that are modified human proteins such as clipped and oxidized variants which can be present in therapeutic protein products could indirectly induce antibodies which react with the unmodified protein. This immunological mimicry has been described in dogs treated with human epoetin. The degree of nonself of this protein for dogs is sufficient to induce an immune response. But there is still enough homology between the human and

Human therapeutic proteins are often highly biologi-cally active and the doses may be at the mg level, making it a technological challenge to formulate the product to keep it stable with a reasonable shelf-life and to avoid the formation of aggregates and other product modifications. The importance of formulation in avoiding immunogenicity is highlighted in two historical cases (Fig. 4). In the case of interferon a-2a, a large difference was noted among different for-mulations. A freeze-dried formulation, containing human serum albumin as a stabilizer that according to its instructions could be kept at room temperature was particularly immunogenic. It appeared that at room temperature interferon a-2a became partly oxidized. The oxidized molecules formed aggregates also with the unmodified interferon and human serum albumin, and these aggregates were respon-sible for the immune response.

More recently an antibody-mediated severe form of anemia (pure red cell aplasia; PRCA) occurred after the formulation of an epoetin-a product was changed (Casadevall et al., 2002). Human serum albumin was replaced by polysorbate 80. How this formulation change induced immunogenicity is still not certain. However, the most likely explanation is a less stable new formulation resulting in aggregate formation when not appropriately handled.

The effect of the dose is not quite clear. There are studies with the lowest incidence of antibody forma-tion in the highest dose group. However, such data should be interpreted with caution. In the highest dose group there may be more product in the circulation interfering with the assay or the antibody level maybe lower by increased immune complex formation.

The underlying disease for which the patients are being treated is also important. Patients treated with interferon a-2 for chronic hepatitis are more likely to produce antibodies than patients with solid tumors. The upsurge of epoetin-a induced PRCA after the formulation change was only seen in patients with chronic kidney disease and not in patients with cancer.

As discussed before there are many indications that breaking B-cell tolerance is T-cell independent and thereby independent of HLA-type. Indeed a number of clinical studies have failed to show an association between antibody response and HLA-type.