The Infectious Agents : The Microbial World

Microbiology is a science defined by smallness. Its creation was made possible by the in-vention of the microscope (Gr. micro, small skop, to look, see), which allowed visual-ization of structures too small to see with the naked eye.

THE INFECTIOUS AGENTS : THE MICROBIAL WORLD

Microbiology is a science defined by smallness. Its creation was made possible by the in-vention of the microscope (Gr. micro, small skop, to look, see), which allowed visual-ization of structures too small to see with the naked eye. This definition of microbiology as the study of microscopic living forms still holds if one can accept that some organisms can live only in other cells (eg, all viruses, some bacteria) and others have macroscopic forms (eg, fungal molds, parasitic worms).

Microorganisms are responsible for much of the breakdown and natural recycling of organic material in the environment. Some synthesize nitrogen-containing compounds that contribute to the nutrition of living things that lack this ability; others (oceanic algae) contribute to the atmosphere by producing oxygen through photosynthesis. Because microorganisms have an astounding range of metabolic and energy-yielding abilities, some can exist under conditions that are lethal to other life forms. For example, some bacteria can oxidize inorganic compounds such as sulfur and ammonium ions to generate energy, and some can survive and multiply in hot springs at temperatures above 75°C.

Some microbial species have adapted to a symbiotic relationship with higher forms of life. For example, bacteria that can fix atmospheric nitrogen colonize root systems of legumes and of a few trees such as alders and provide the plants with their nitrogen requirements. When these plants die or are plowed under, the fertility of the soil is enhanced by nitrogenous compounds originally derived from the metabolism of the bacteria.

Ruminants can use grasses as their prime source of nutrition, because the abundant flora of anaerobic bacteria in the rumen break down cellulose and other plant compounds to usable carbohydrates and amino acids and synthesize essential nutrients including some amino acids and vitamins. These few examples illustrate the protean nature of microbial life and their essential place in our ecosystem.

The major classes of microorganisms in terms of ascending size and complexity are viruses, bacteria, fungi, and parasites. Parasites exist as single or multicellular structures with the same eukaryotic cell plan of our own cells. Fungi are also eukaryotic but have a rigid external wall that makes them seem more like plants than animals. Bacteria also have a cell wall, but their cell plan is prokaryotic (Table 1–1) and lacks the organelles of eukaryotic cells. Viruses have a genome and some structural elements but must take over the machinery of another living cell (eukaryotic or prokaryotic) in order to replicate. 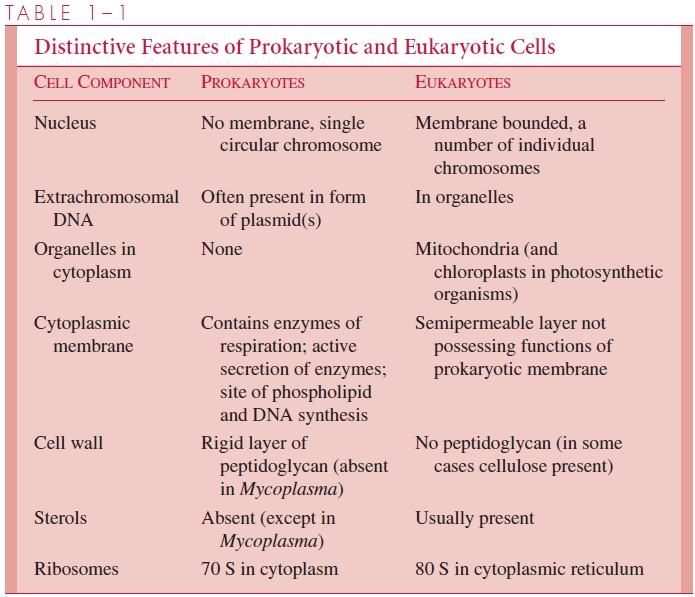 Viruses are strict intracellular parasites of other living cells, not only of mammalian and plant cells, but also of simple unicellular organisms, including bacteria (the bacterio-phages). Viruses are simple forms of replicating, biologically active particles that carry genetic information in either DNA or RNA molecules, but never both. Most mature viruses have a protein coat over their nucleic acid and sometimes a lipid surface mem-brane derived from the cell they infect. Because viruses lack the protein-synthesizing en-zymes and structural apparatus necessary for their own replication, they bear essentially no resemblance to a true eukaryotic or prokaryotic cell.

Viruses replicate by using their own genes to direct the metabolic activities of the cell they infect to bring about the synthesis and reassembly of their component parts. A cell infected with a single viral particle may thus yield many thousands of viral particles, which can be assembled almost simultaneously under the direction of the viral nucleic acid. With many viruses, cell death and infection of other cells by the newly formed viruses result. Sometimes, viral reproduction and cell reproduction proceed simultaneously without cell death, although cell physiology may be affected. The close association of the virus with the cell sometimes results in the integration of viral nucleic acid into the functional nucleic acid of the cell, producing a latent infection that can be transmitted intact to the progeny of the cell.

Bacteria are the smallest (0.1 to 10μm) living cells. They have a cytoplasmic membrane surrounded by a cell wall; a unique interwoven polymer called peptidoglycan makes the wall rigid. The simple prokaryotic cell plan includes no mitochondria, lysosomes, endo-plasmic reticulum, or other organelles. In fact, most bacteria are about the size of mito-chondria. Their cytoplasm contains only ribosomes and a single, double-stranded DNA chromosome. Bacteria have no nucleus, but all the chemical elements of nucleic acid and protein synthesis are present. Although their nutritional requirements vary greatly, most bacteria are free-living, if given an appropriate energy source. Tiny metabolic factories, they divide by binary fission and can be grown in artificial culture, often in less than a day. The Archaebacteria differ radically from other bacteria in structure and metabolic processes; they live in environments humans consider hostile (eg, hot springs, high salt areas) but are not associated with disease.

Fungi exist in either yeast or mold forms. The smallest of yeasts are similar in size to bac-teria, but most are larger (2 to 12μm) and multiply by budding. Molds form tubular ex-tensions called hyphae, which when linked together in a branched network form the fuzzy structure seen on neglected bread. Fungi are eukaryotic, and both yeasts and molds have a rigid external cell wall composed of their own unique polymers, called glucan, mannan, and chitin. Their genome may exist in a diploid or haploid state and replicate by meiosis or simple mitosis. Most fungi are free-living and widely distributed in nature. Generally, fungi grow more slowly than bacteria, although their growth rates sometimes overlap.

Parasites are the most diverse of all microorganisms. They range from unicellular amoe-bas of 10 to 12μm to multicellular tapeworms 1 meter in length. The individual cell plan is eukaryotic, but the organisms such as worms are highly differentiated and have their own organ systems. Most of the worms have a microscopic egg or larval stage, and part of their life cycle may involve multiple vertebrate and invertebrate hosts. Most parasites are free-living but some depend on combinations of animal, arthropod, or crustacean hosts for their survival.