The Health Care Industry and the Nursing Profession

a. Nursing Defined b. The Patient/Client: Consumer of Nursing and Health Care c. Health Care in Transition

The Health Care Industry and the Nursing Profession

Since the time of Florence Nightingale, who wrote in 1858 that the goal of nursing was “to put the patient in the best condition for nature to act upon him,” nursing leaders have described nurs-ing as both an art and a science. However, the definition of nurs-ing has evolved over time. The American Nurses Association (ANA), in its Social Policy Statement (ANA, 1995), defined nurs-ing as “the diagnosis and treatment of human responses to health and illness” and provided the following illustrative list of phe-nomena that are the focus for nursing care and research:

• Emotions related to experiences of health and illness

• Meanings ascribed to health and illnesses

• Transitions across the life span, such as birth, growth, de-velopment, and death

• Affiliative relationships, including freedom from oppression and abuse

Nurses have a responsibility to carry out their role as defined in the Social Policy Statement, to comply with the nurse practice act of the state where they practice, and to comply with the code for nurses as spelled out by the International Council of Nurses and the ANA. Understanding the needs of health care consumers and the health care delivery system, including the forces that af-fect nursing and health care delivery, will provide a foundation for examining the delivery of nursing care.

THE PATIENT/CLIENT: CONSUMER OF NURSING AND HEALTH CARE

The central figure in health care services is, of course, the patient. The term patient, which is derived from a Latin verb meaning “to suffer,” has traditionally been used to describe those who are re-cipients of care. The connotation commonly attached to the word is one of dependence. For this reason, many nurses prefer to use the term client, which is derived from a Latin verb mean-ing “to lean,” connoting alliance and interdependence.

The patient who seeks care for a health problem or problems (increasing numbers of people have multiple health problems) is also an individual, a member of a family, and a citizen of the com-munity. Patients’ needs vary depending on their problem, asso-ciated circumstances, and past experiences. One of the nurse’s important functions in health care delivery is to identify the pa-tient’s immediate needs and take measures to address them.

Certain needs are basic to all people and require satisfaction ac-cordingly. Such needs are addressed on the basis of priority, meaning that some needs are more pressing than others. Once an essential need is met, the person experiences a need on a higher level. Approaching needs according to priority reflects Maslow’s hierarchy of needs (Fig. 1-1). 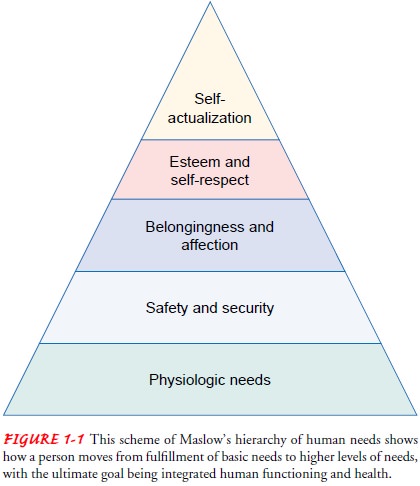 Maslow ranked human needs as follows: physiologic needs; safety and security; belongingness and affection; esteem and self-respect; and self-actualization, which includes self-fulfillment, desire to know and understand, and aesthetic needs. Lower-level needs al-ways remain, but a person’s ability to pursue higher-level needs indicates that he or she is moving toward psychological health and well-being. Such a hierarchy of needs is a useful organiza-tional framework that can be applied to the various nursing mod-els for assessment of a patient’s strengths, limitations, and need for nursing interventions.

Changes occurring in health care delivery and nursing are the result of societal, economic, technological, scientific, and political forces that have evolved throughout the 20th and into the 21st century. Among the most significant changes are shifts in population de-mographics, particularly the increase in the aging population and the cultural diversity of the population; changing patterns of dis-eases; increased technology; increased consumer expectations; the high costs of health care and changes in health care financing; and other health care reform efforts. These changes have led to insti-tutional restructuring, staff downsizing, increased outpatient care services, decreased lengths of hospital stay, and more care being provided in the community and in the home. Such changes are having a dramatic influence on where nurses practice, with an in-creasing trend for nurses to provide health care in community and home settings. Indeed, these changes have a dynamic influ-ence on our view of health and illness and therefore affect the focus of nursing and health care.

As an increasing proportion of the population reaches age 65 years and older, and with the shift in disease patterns from acute illnesses to chronic illnesses, the traditional disease man-agement and care focus of the health care professions has ex-panded. There is growing concern about emerging infectious diseases, trauma, and bioterrorism. The health care focus must center more on prevention, health promotion, and management of chronic conditions than in previous times. This shift in focus coincides with a nationwide emphasis on cost control and re-source management directed toward providing cost-efficient and cost-effective health care services to the population as a whole.