Once a beggar was hungry. He saw a big house and went there to see if he would get something to eat.

Once a beggar was hungry. He saw a big house and went there to see if he would get something to eat. The house was very big and luxurious. There was a beautiful garden around the house. As he neared the house, he could smell tasty food. He knocked the door. A well dressed man opened the door. The man’s face shrank on seeing the old man. He asked in a harsh tone “What do you want?” The old man with his feeble voice, replied “It has been two days since I had food, so please give me something to eat”. The rich man got angry and shouted at the beggar ”Do you think I am running free food service? Get out of here”. The old man with the same tone requested, “Is there any left out?” “Don’t stand here wasting my time, get out of my sight.” said the man and slammed the door. The old man slowly walked away. In his way he saw a lady from the house dropping banana leaves with food in the trash can. He was sad. 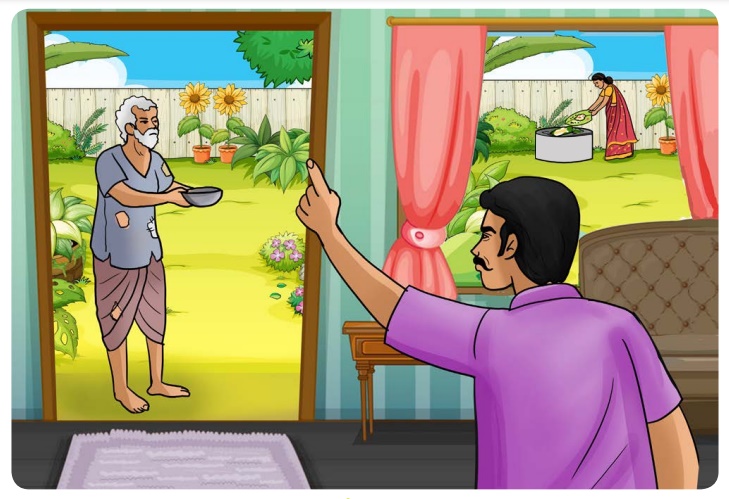 He slowly walked to the next house, and knocked the door “Is anybody there?” After repeated knocks, a voice answered, “Nobody is home. Try the next house.” “If there is no one, then, who is answering me?” asked the old man.

The man got irritated and opened the door and said, “Why don’t you try the big house in the same street?” The old man sadly replied, “I tried, but he did not offer any food.” He asked, “How can you expect me to help you when the richest man of the village denied?” The old man left the place. 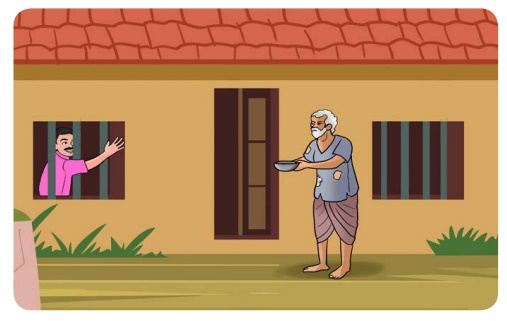 The old man was tired and could not walk anymore. So he sat under a tree and soon slept. A man in shabby clothes woke him and asked “Who are you? Why are you lying here?” The old man replied, “I have no food and no place to stay.” The poor man said, “You look tired and hungry, come to my home and stay with us.” The old man replied, “I don’t want to be a burden to you, I just need some food.” The poor man said, “Okay, just come and have some food with us.” He took the old man to his hut.

The hut was very small and barely enough for the family. The old man saw that the house wouldn’t withstand the monsoon. The house had no furniture, but only a few utensils were there for use. The people in the house, a lady and two children, were very happy to welcome the old man in. They made him sit comfortably. The children sat near him. The man introduced himself and his family, “I am Kaliyan. I work in the farm nearby. This is my wife Viji and my children Gopi and Rathika.” Soon the children got close to the old man. They asked many questions and played with him. Kaliyan helped the man wash his face and hands. When the old man entered the hut, Viji was ready to serve the food. They all sat in a circle. Viji served the gruel from an earthen pot. First she gave to the old man, and then to the children and Kaliyan. After the dinner, Kaliyan laid a mat for the old man to sleep. 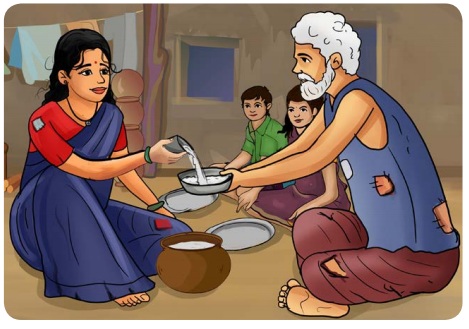 Next morning, the beggar asked them to pack their things. They all couldn’t understand why he asked so. Before they could ask anything, the beggar said, “I am not a beggar, I am a land lord from a nearby town. My family and I were helping the poor and the needy. My wife and son died two years back. Without them I continued my service. As I grew older, I wanted someone to take care of my wealth and service after me. You have to accept my request and fulfill my desire.” Kaliyan was reluctant but the old man persuaded him and his family. The old man was happy that his service would continue many more years even after his death. 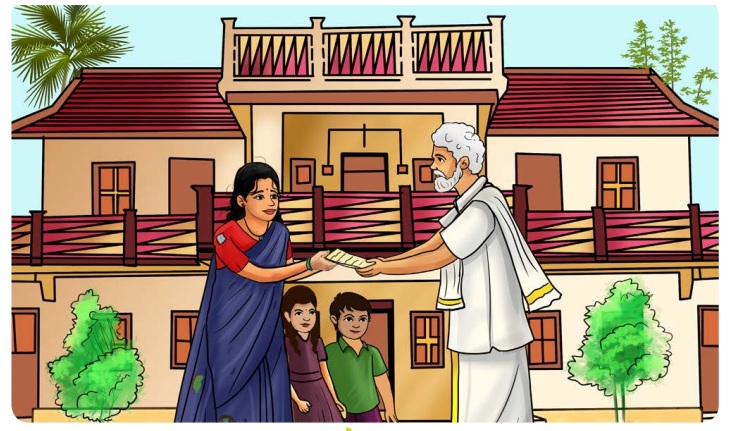 Why did the old man disguise himself as a beggar?

The old man wanted to find out the people who could continue his service and help the poor. So he disguised himself as a beggar and went in search of good people.