The Database Design and Implementation Process

The Database Design and Implementation Process

Design the logical and physical structure of one or more databases to accommodate the information needs of the users in an organization for a defined set of applications. 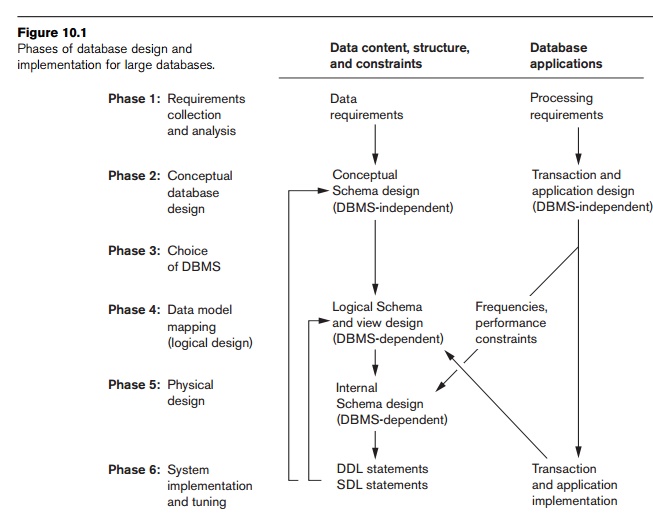 The goals of database design are multiple:

Satisfy the information content requirements of the specified users and applications.

Provide a natural and easy-to-understand structuring of the information.

Support processing requirements and any performance objectives, such as response time, processing time, and storage space.

These goals are very hard to accomplish and measure and they involve an inherent tradeoff: if one attempts to achieve more naturalness and understandability of the model, it may be at the cost of performance. The problem is aggravated because the database design process often begins with informal and incomplete requirements. In contrast, the result of the design activity is a rigidly defined database schema that cannot easily be modified once the database is implemented. We can identify six main phases of the overall database design and implementation process:

Choice of a DBMS

The design process consists of two parallel activities, as illustrated in Figure 10.1. The first activity involves the design of the data content, structure, and constraints of the database; the second relates to the design of database applications. To keep the figure simple, we have avoided showing most of the interactions between these sides, but the two activities are closely intertwined. For example, by analyzing data-base applications, we can identify data items that will be stored in the database. In addition, the physical database design phase, during which we choose the storage structures and access paths of database files, depends on the applications that will use these files for querying and updating. On the other hand, we usually specify the design of database applications by referring to the database schema constructs, which are specified during the first activity. Clearly, these two activities strongly influence one another. Traditionally, database design methodologies have primarily focused on the first of these activities whereas software design has focused on the second; this may be called data-driven versus process-driven design. It now is rec-ognized by database designers and software engineers that the two activities should proceed hand-in-hand, and design tools are increasingly combining them.

The six phases mentioned previously do not typically progress strictly in sequence. In many cases we may have to modify the design from an earlier phase during a later phase. These feedback loops among phases—and also within phases—are com-mon. We show only a couple of feedback loops in Figure 10.1, but many more exist between various phases. We have also shown some interaction between the data and the process sides of the figure; many more interactions exist in reality. Phase 1 in Figure 10.1 involves collecting information about the intended use of the database, and Phase 6 concerns database implementation and redesign. The heart of the data-base design process comprises Phases 2, 4, and 5; we briefly summarize these phases:

Conceptual database design (Phase 2). The goal of this phase is to produce a conceptual schema for the database that is independent of a specific DBMS. We often use a high-level data model such as the ER or EER model (see Chapters 7 and 8) during this phase. Additionally, we specify as many of the known database applications or transactions as possible, using a nota-tion that is independent of any specific DBMS. Often, the DBMS choice is already made for the organization; the intent of conceptual design is still to keep it as free as possible from implementation considerations.

Data model mapping (Phase 4). During this phase, which is also called logical database design, we map (or transform) the conceptual schema from the high-level data model used in Phase 2 into the data model of the chosen DBMS. We can start this phase after choosing a specific type of DBMS—for example, if we decide to use some relational DBMS but have not yet decided on which particular one. We call the latter system-independent (but data model-dependent) logical design. In terms of the three-level DBMS architecture discussed in Chapter 2, the result of this phase is a conceptual schema in the chosen data model. In addition, the design of external schemas (views) for specific applications is often done during this phase.

Physical database design (Phase 5). During this phase, we design the specifications for the stored database in terms of physical file storage structures, record placement, and indexes. This corresponds to designing the internal schema in the terminology of the three-level DBMS architecture.

Database system implementation and tuning (Phase 6). During this phase, the database and application programs are implemented, tested, and eventually deployed for service. Various transactions and applications are tested individually and then in conjunction with each other. This typically reveals opportunities for physical design changes, data indexing, reorganization, and different placement of data—an activity referred to as database tuning. Tuning is an ongoing activity—a part of system maintenance that continues for the life cycle of a database as long as the database and applications keep evolving and performance problems are detected.

We discuss each of the six phases of database design in more detail in the following subsections.