Rational Rose is one of the modeling tools used in the industry to develop information systems. It was acquired by IBM in 2003. As we pointed out in the first two sections of this chapter, a database is a central component of most information systems. Rational Rose provides the initial specification in UML that eventually leads to the database development. Many extensions have been made in the latest versions of Rose for data modeling, and now it provides support for conceptual, logical, and physical database modeling and design.

Rational Rose Data Modeler is a visual modeling tool for designing databases. Because it is UML-based, it provides a common tool and language to bridge the communication gap between database designers and application developers. This makes it possible for database designers, developers, and analysts to work together, capture and share business requirements, and track them as they change through-out the process. Also, by allowing the designers to model and design all specifications on the same platform using the same notation, it improves the design process and reduces the risk of errors.

The process modeling capabilities in Rational Rose allow the modeling of the behavior of database applications as we saw in the short example above, in the form of use cases (Figure 10.8), sequence diagrams (Figure 10.12), and statechart diagrams (Figure 10.11). There is the additional machinery of collaboration diagrams to show interactions between objects and activity diagrams to model the flow of control, which we did not show in our example. The eventual goal is to generate the database specification and application code as much as possible. The Rose Data Modeler can also capture triggers, stored procedures, and other modeling concepts explicitly in the diagram rather than representing them with hidden tagged values behind the scenes (see Chapter 26 which discusses active databases and triggers). The Rose Data Modeler also provides the capability to forward engineer a database in terms of constantly changing requirements and reverse engineer an existing implemented database into its conceptual design.

There are many tools and options available in Rose Data Modeler for data modeling.

Figure 10.15 is similar to Figure 7.16, except that it is using the notation provided by Rational Rose. Hence, it can be considered as an ER diagram using UML notation, with the inclusion of methods and other details. Identifying relationships specify that an object in a child class (DEPENDENT in Figure 10.15) cannot exist without a corresponding parent object in the parent class (EMPLOYEE in Figure 10.15), 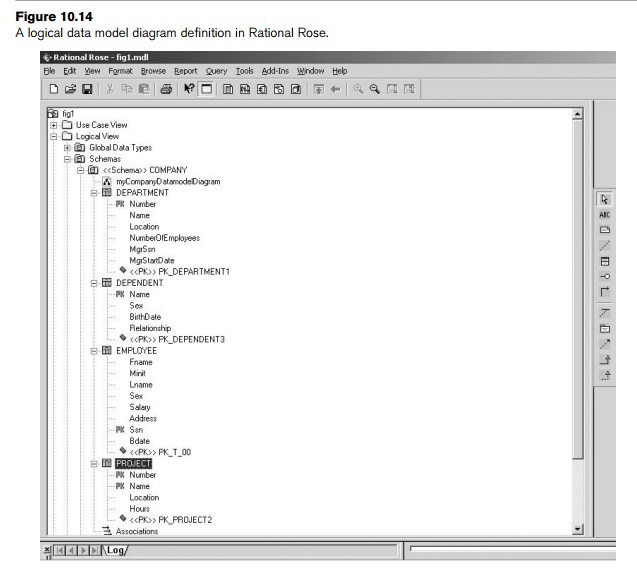 whereas non-identifying relationships specify a regular association (relationship) between two independent classes. It is possible to update the schemas directly in their text or graphical form. For example, if the relationship between the EMPLOYEE and PROJECT called WORKS_ON was deleted, Rose would automatically update or delete all the foreign keys in the relevant tables.

An important difference in Figure 10.15 from our previous ER notation shown in Chapters 7 and 8 is that foreign key attributes actually appear in the class diagrams in Rational Rose. This is common in several diagrammatic notations to make the conceptual design closer to the way it is realized in the relational model implementation. In Chapters 7 and 8, the conceptual ER and EER diagrams and the UML class diagrams did not include foreign key attributes, which were added to the relational schema during the mapping process (see Chapter 9).

Converting Logical Data Model to Object Model and Vice Versa. Rational Rose Data Modeler also provides the option of converting a logical database design (relational schema) to an object model design (object schema) and vice versa. For example, the logical data model shown in Figure 10.14 can be converted to an object model. This sort of mapping allows a deep understanding of the relationships between the conceptual model and implementation model, and helps in keeping them both up-to-date when changes are made to either model during the develop-ment process. Figure 10.16 shows the Employee table after converting it to a class in an object model. The various tabs in the window can then be used to enter/display different types of information. They include operations, attributes, and relation-ships for that class.

Extensive Domain Support. The Rose Data Modeler allows database designers to create a standard set of user-defined data types (these are similar to domains in 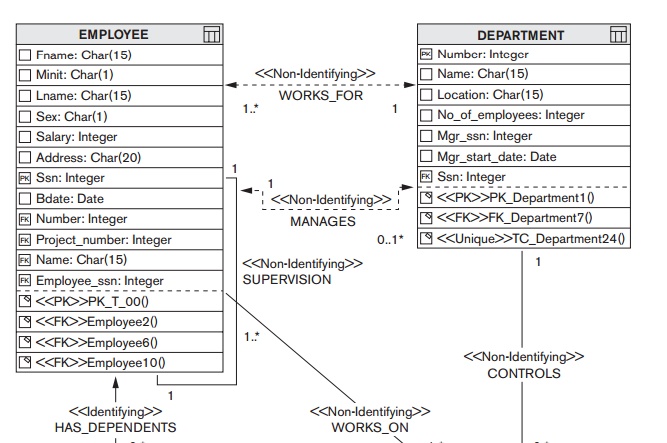 SQL; see Chapter 4) and assign them to any column in the data model. Properties of the domain are then cascaded to assigned columns. These domains can then be maintained by a standards group and deployed to all modelers when they begin creating new models by using the Rational Rose framework.

Easy Communication among Design Teams. As mentioned earlier, using a common tool allows easy communication between teams. In the Rose Data Modeler, an application developer can access both the object and data models and see how they are related, and thus make informed and better choices about how to build data access methods. There is also the option of using Rational Rose Web Publisher to allow the models and the meta-data beneath these models to be avail-able to everyone on the team.

What we have described above is a partial description of the capabilities of the Rational Rose tool as it relates to the conceptual and logical design phases in Figure 10.1. The entire range of UML diagrams we described in Section 10.3 can be developed and maintained in Rose. For further details the reader is referred to the product literature. Figure 10.17 gives another version of the class diagram in Figure 7.16 drawn using Rational Rose. Figure 10.17 differs from Figure 10.15 in that the foreign key attributes are not shown explicitly. Hence, Figure 10.17 is using the notations presented in Chapters 7 and 8. Rational Rose allows either option to be used, depending on the preference of the designers.