To know about tetromino, it is essential to have an idea about Domino and Trinomino.

To know about tetromino, it is essential to have an idea about Domino and Trinomino.

Join two squares of size 1cm × 1cm edge to edge. Such formation is called as Domino. When we arrange Domino either horizontally or vertically we get the following shapes

Similarly, when we join three squares along their edges we get the formation called Trinomino. When we arrange horizontally or vertically we get the following shapes

Is this the only way to join the three squares ? No, we get four different orientations of shape as shown

Try to join four squares either horizontally or vertically as we did for Domino and Trinomino, then we get the following shapes

Is there any other way of  joining four squares. Yes, let us learn about them.

The teacher divide the students into five groups and gives each group 20 square (of size 1 cm × 1 cm) tokens. Then ask them to form different shapes using the four square tokens and compare the shapes created by all groups. Draw the common shapes on the blackboard.

How many shapes do we get ?

Only five shapes, isn’t it?

When we rotate these shapes, we get all the other shapes as shown below :

Thus, all the formation of four squares formed by joining edge to edge are called “ TETROMINOES ” .

Use the given five tetrominoes only once and create the shape given below.

Can you form the rectangles of same area using the five tetrominoes only once? No, observe the following formations (Fig 6.9 – 6.12) where we have arranged tetrominoes edge to edge and tried to fill in rectangles. The boxes marked X are not filled by a tetromino. Hence the rectangle is incomplete. Also, some squares protrude outside the boundary of the rectangle.

Why we are not able to form rectangular shapes using these tetrominoes only ones?.

To know the reason, take the five tetrominoes in the form shown below.

From among the five tetrominoes, in four of them, the number of shaded and unshaded squares are equal. But, in one tetromino

, the shaded and unshaded squares are not equal. Hence, it is impossible to fit the tetrominoes in the rectangle using it only once.

This concept will be useful in many places in real life situation like tiling a floor, packing things in a box and so on.

1. Complete the rectangles given below using the five tetrominoes only once.

Find the tetromino shapes found in the showcase given in Fig.6.21 below. Form the same shape in the geoboard using rubberbands. 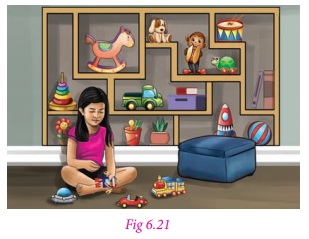 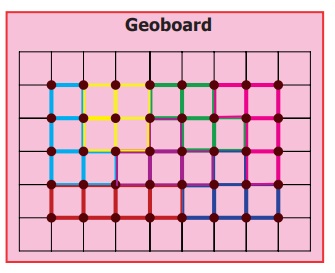 1. How many tetrominoes are there in a tile

2. If the cost of a square tile is ₹ 52 then what will be the cost of the tiles that Raghavan buys for the front elevation? (see Fig. 6.22) 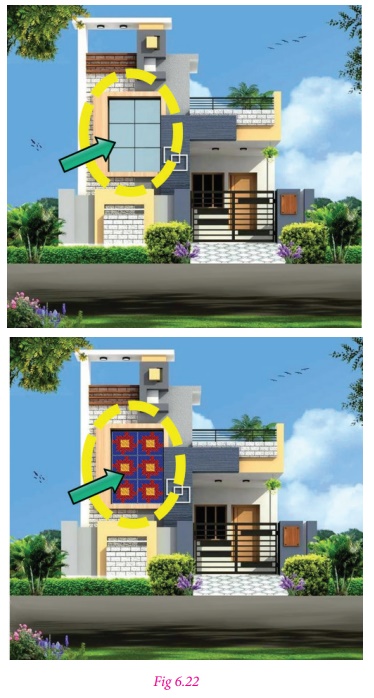 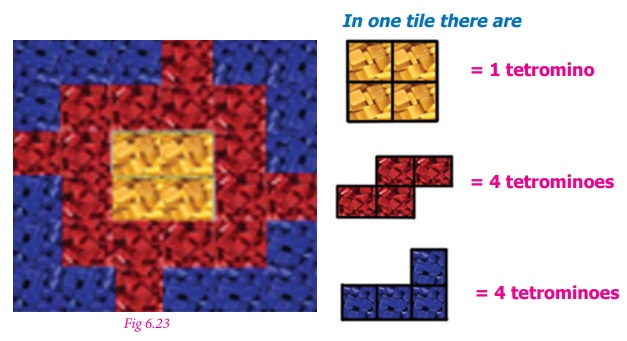 Therefore, there are nine tetrominoes in a tile.

There are six tiles in the front elevation