The incubation period of the disease is from 4 days to several weeks. 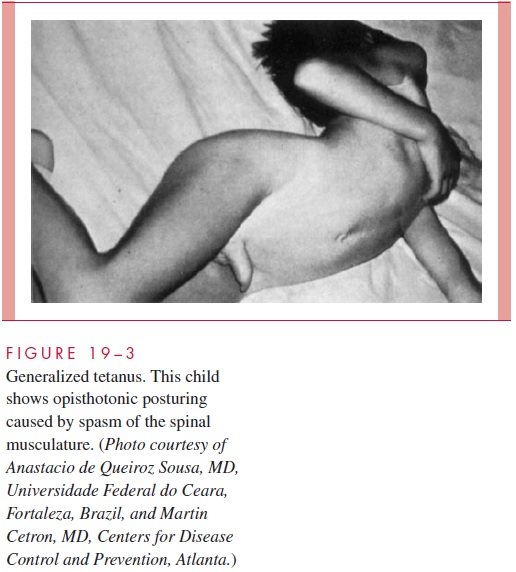 The diagnosis is clinical; neither culture nor toxin testing are useful. Although tetanus may be localized to muscles innervated by nerves in the region of the infection, it is usu-ally more generalized. The masseter muscles are often the first to be affected, resulting in inability to open the mouth properly (trismus); this effect accounts for the use of the term lockjaw to describe the disease. As other muscles become affected, intermittent spasmscan become generalized to include muscles of respiration and swallowing. In extreme cases, massive contractions of the back muscles (opisthotonos) develop (Fig 19 – 3).

Untreated patients with tetanus retain consciousness and are aware of their plight, in which small stimuli can trigger massive contractions. In fatal cases, death results from ex-haustion and respiratory failure. Untreated, the mortality caused by the generalized dis-ease varies from 15 to more than 60%, according to the lesion, incubation period, and age of the patient. Mortality is highest in neonates and in elderly patients.

Specific treatment of tetanus involves neutralization of any unbound toxin with largedoses of human tetanus immune globulin (HTIG), which is derived from the blood of vol-unteers hyperimmunized withtoxoid.Most importantintreatment arenonspecific supportive measures, including maintenance of a quiet dark environment, sedation, and provision of an adequate airway. Benzodiazepines are also used to indirectly antagonize the effects of the toxin. The value of antimicrobics is not clear. Because toxin binding is irreversible, recovery requires the generation of new axonal terminals.

Routine active immunization with tetanus toxoid, combined with diphtheria toxoid and pertussis vaccine (DTaP) for primary immunization in childhood and DT for adults, can completely prevent the disease. It has reduced the incidence of tetanus in the United States to less than 50 reported cases per year. Five doses of DT are recommended, to be given at the ages of 2, 4, 6, and 18 months, and once again between the ages of 4 and 6 years. Thereafter a booster of adult-type tetanus diphtheria toxoid should be given every 10 years. Unfortunately, routine childhood immunization is not administratively and eco-nomically feasible in many less well-developed countries, where as many as a million cases of tetanus occur annually. In such settings, immunization efforts have been focused on pregnant women, because transplacental transfer of antibodies to the fetus also pre-vents the highly lethal neonatal tetanus.

Unimmunized subjects with tetanus-prone wounds should be given passive immunity with a prophylactic dose of HTIG as soon as possible. This immunization provides immedi-ate protection. Those who have had a full primary series of immunizations and appropriate boosters are given toxoid for tetanus-prone wounds if they have not been immunized within the previous 10 years in the case of clean minor wounds or 5 years for more contaminated wounds. If immunization is incomplete or the wound has been neglected and poses a seriousrisk of disease, HTIG is also appropriate. Penicillin therapy is a prophylactic adjunct in seri-ous or neglected wounds but in no way alters the need for specific prophylaxis.