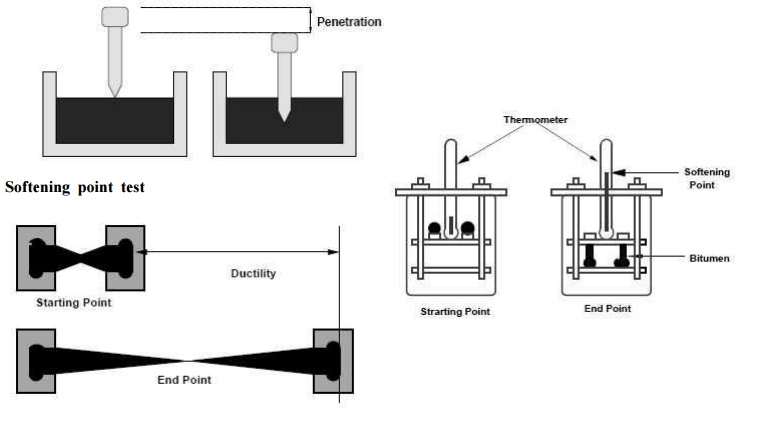 It measures the hardness or softness of bitumen by measuring the depth in tenths of a millimeter to which a standard loaded needle will penetrate vertically in 5 seconds. BIS had standardised the equipment and test procedure. The penetrometer consists of a needle assembly with a total weight of 100g and a device for releasing and locking in any position. The bitumen is softened to a pouring consistency, stirred thoroughly and poured into containers at a depth at least 15 mm in excess of the expected penetration. The test should be conducted at a specified temperature of 25o C. It may be noted that penetration value is largely influenced by any inaccuracy with regards to pouring temperature, size of the needle, weight placed on the needle and the test temperature. A grade of 40/50 bitumen means the penetration value is in the range 40 to 50 at standard test conditions. 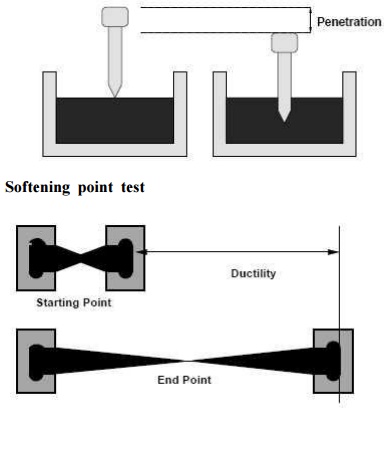 Ductility is the property of bitumen that permits it to undergo great deformation or elongation. Ductility is defined as the distance in cm, to which a standard sample or briquette of the material will be elongated without breaking. Dimension of the briquette thus formed is exactly 1 cm square. The bitumen sample is heated and poured in the mould assembly placed on a plate. These samples with moulds are cooled in the air and then in water bath at 27o C temperature. The excess bitumen is cut and the surface is leveled using a hot knife. Then the mould with assembly containing sample is kept in water bath of the ductility machine for about 90 minutes. The sides of the moulds are removed, the clips are hooked on the machine and the machine is operated. The distance up to the point of breaking of thread is the ductility value which is reported in cm. The ductility value gets affected by factors such as pouring temperature, test temperature, rate of pulling etc. A minimum ductility value of 75 cm has been specified by the BIS. Figure 23.4.2 shows ductility moulds to be filled with bitumen.

Softening point denotes the temperature at which the bitumen attains a particular degree of softening under the specifications of test. The test is conducted by using Ring and Ball apparatus. A brass ring containing test sample of bitumen is suspended in liquid like water or glycerin at a given temperature. A steel ball is placed upon the bitumen sample

and the liquid medium is heated at a rate of 5o C per minute. Temperature is noted when the softened bitumen touches the metal plate which is at a specified distance below. Generally, higher 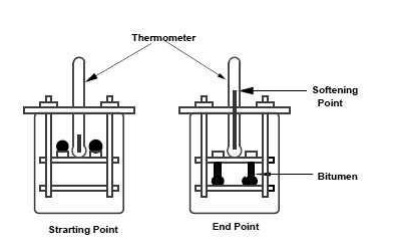 In paving jobs, to classify a binder, density property is of great use. In most cases bitumen is weighed, but when used with aggregates, the bitumen is converted to volume using density values. The density of bitumen is greatly influenced by its chemical composition. Increase in aromatic type mineral impurities cause an increase in specific gravity.

Viscosity denotes the fluid property of bituminous material and it is a measure of resistance to flow. At the application temperature, this characteristic greatly influences the strength of resulting paving mixes. Low or high viscosity during compaction or mixing has been observed to result in lower stability values. At high viscosity, it resist the compactive effort and thereby resulting mix is heterogeneous, hence low stability values. And at low viscosity instead of providing a uniform lm over aggregates, it will lubricate the aggregate particles. Orifice type viscometers are used to indirectly find the viscosity of liquid binders like cutbacks and emulsions. The viscosity expressed in seconds is the time taken by the 50 ml bitumen material to pass through the orifice of a cup, under standard test conditions and specified temperature. Viscosity of a cutback can be measured with either 4.0 mm orifice at 25o C or 10 mm orifice at 25 or 40o C.