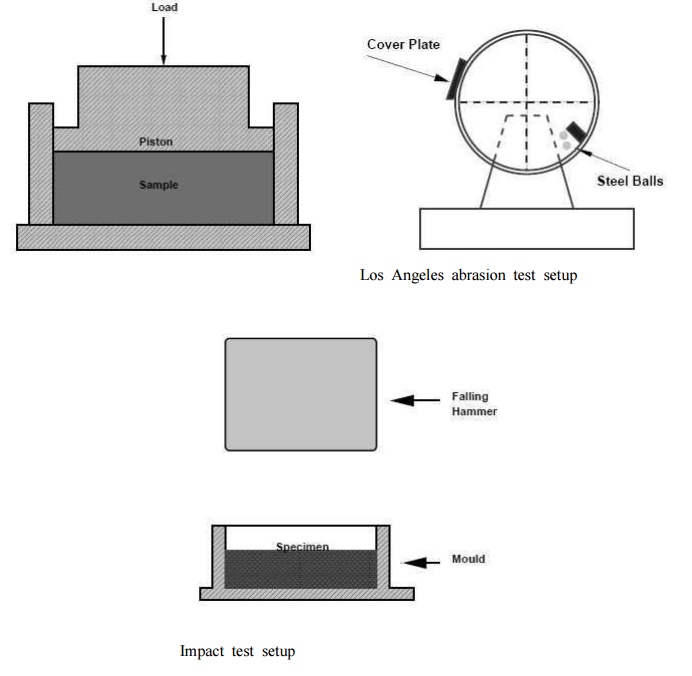 Sub grade soil is an integral part of the road pavement structure as it provides the support to the pavement from beneath.

The tests used to evaluate the strength properties of soils may be broadly divided into three groups:

Shear tests are usually carried out on relatively small soil samples in the laboratory. In order to find out the strength properties of soil, a number of representative samples from different locations are tested. Some of the commonly known shear tests are direct shear test, triaxial compression test, and unconfined compression test.

Bearing tests are loading tests carried out on sub grade soils in-situ with a load bearing area. The results of the bearing tests are influenced by variations in the soil properties within the stressed soil mass underneath and hence the overall stability of the part of the soil mass stressed could be studied.

One of the model in which pavement material can fail is by crushing under compressive 52 stress. A test is standardized by IS:2386 part-IV and used to determine the crushing strength of aggregates. The aggregate crushing value provides a relative measure of resistance to crushing under gradually applied crushing load. The test consists of subjecting the specimen of aggregate in standard mould to a compression test under standard load conditions (Figure 22:1). Dry aggregates passing through 12.5 mm sieves and retained 10 mm sieves are filled in a cylindrical measure of 11.5 mm diameter and 18 cm height in three layers. Each layer is tampered 25 times with at standard tamping rod. The test sample is weighed and placed in the test cylinder in three layers each layer being tampered again. The specimen is subjected to a compressive load of 40 tonnes gradually applied at the rate of 4 tonnes per minute. Then crushed aggregates are then sieved through 2.36 mm sieve and weight of passing material (W2 ) is expressed as percentage of the weight of the total sample (W1 ) which is the aggregate crushing value. 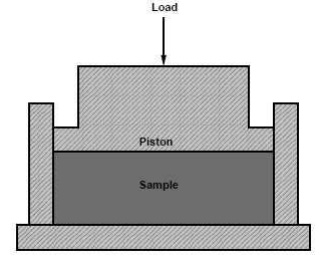 A value less than 10 signifies an exceptionally strong aggregate while above 35 would normally be regarded as weak aggregates.

Los Angeles machine consists of circular drum of internal diameter 700 mm and length 520 mm mounted on horizontal axis enabling it to be rotated (see Figure 22:2). An abrasive charge consisting of cast iron spherical balls of 48 mm diameters and weight 340-445 g is placed in the cylinder along with the aggregates. The number of the abrasive spheres varies according to the grading of the sample. The quantity of aggregates to be used depends upon the gradation and usually ranges from 5-10 kg. The cylinder is then locked and rotated at the speed of 30-33 rpm for a total of 500 -1000 revolutions depending upon the gradation of aggregates. 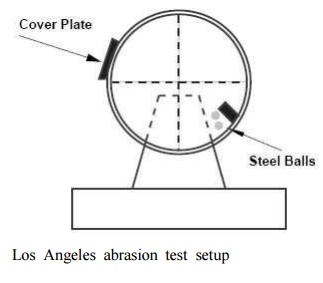 After specified revolutions, the material is sieved through 1.7 mm sieve and passed fraction is expressed as percentage total weight of the sample. This value is called Los Angeles abrasion value.

The aggregate impact test is carried out to evaluate the resistance to impact of aggregates. Aggregates passing 12.5 mm sieve and retained on 10 mm sieve is filled in a cylindrical steel cup of internal dia 10.2 mm and depth 5 cm which is attached to a metal base of impact testing machine. The material is filled in 3 layers where each layer is tamped for 25 number of blows. Metal hammer of weight 13.5 to 14 Kg is arranged to drop with a free fall of 38.0 cm by vertical guides and the test specimen is subjected to 15 number of blows. The crushed aggregate is allowed to pass through 2.36 mm IS sieve. And the impact value is measured as percentage of aggregates passing sieve (W2 ) to the total weight of the sample (W1 ). 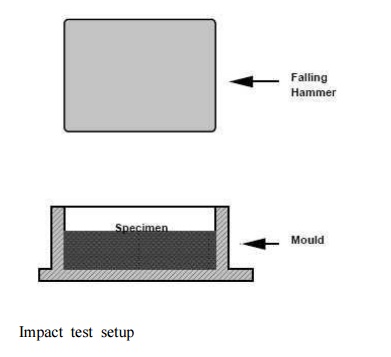 Soundness test is intended to study the resistance of aggregates to weathering action, by conducting accelerated weathering test cycles. The Porous aggregates subjected to freezing and thawing are likely to disintegrate prematurely. To ascertain the durability of such aggregates, they are subjected to an accelerated soundness test as specified in IS:2386 part-V. Aggregates of specified size are subjected to cycles of alternate wetting in a saturated solution of either sodium sulphate or magnesium sulphate for 16 - 18 hours and then dried in oven at 105 110oC to a constant weight. After five cycles, the loss in weight of aggregates is determined by sieving out all undersized particles and weighing. And the loss in weight should not exceed 12 percent when tested with sodium sulphate and 18 percent with magnesium sulphate solution.