Techniques of Water Distribution in the Farms

Techniques of Water Distribution in the Farms:

There are various ways in which the irrigation water can be applied to the fields. Their main classification is as follows: 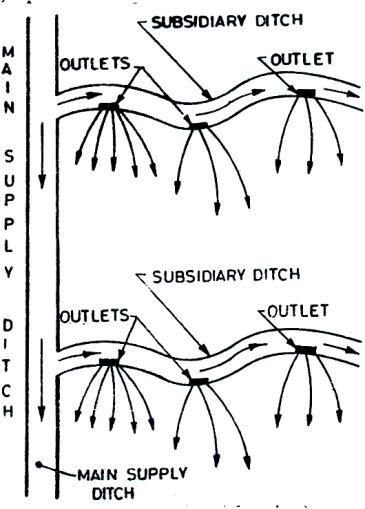 These methods are briefly discussed below:

In this method, ditches are excavated in the field, and they may be either on the contour or up and down the slope. Water from these ditches, flows across the field. After the water leaves the ditches, no attempt is made to control the flow by means of levees, etc. Since the movement of water is not restricted, it is sometimes called wild flooding. Although the initial cost of land preparation is low, labour requirements are usually high and water application efficiency is also low. Wild flooding, is most suitable for close growing crops, pastures, etc., particularly where the land is steep. Contour ditches called laterals or subsidiary ditches, are generally spaced at about 20 to 50 metres apart, depending upon the slope, texture of soil, crops to be grown, etc. This method may be used on rolling and (topography irregular) where borders, checks, basins and furrows are not feasible.

In this method, the land is divided into a number of strips, separated by low levees called borders. The land areas confined in each strip is of the order of 10 to 20 metres in width, and 100 to 400 metres in length, as shown in figure Ridges between borders should be sufficiently high to prevent overtopping during irrigation.

To prevent water from concentrating on either side of the border, the land should be leveled perpendicular to the flow. Water is made to flow from the supply ditch into each strip. The water flows slowly towards the lower end, and infiltrates into the soil as it advances. When the advancing water reaches the lower end of the strip, the supply of water to the strip is turned off. 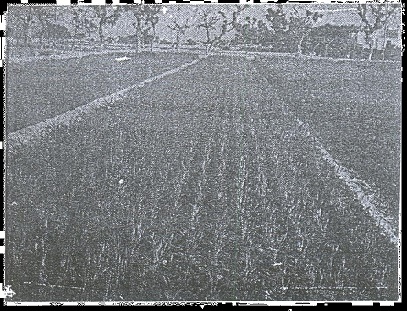 The supply ditch, also called irrigation stream, may either be in the form of an earthen channel or a lined channel or an underground concrete pipe having risers at intervals. The size of the supply ditch depends upon the infiltration rate of the soil, and the width of the border strip. Coarse textured soils with high infiltration rate will require high discharge rate and therefore larger supply ditch, in order to spread water over the entire strip rapidly, and to avoid excessive losses due to deep percolation at the upper reaches. On the other hand, fine textured soils with low infiltration rates, require smaller ditches to avoid excessive losses due to run off at the lower reaches.

A relationship between the discharge through the supply ditch (Q) the average depth of water flowing over the strip (y), the rate of infiltration of the soil (f), the area of the land irrigated (A), and the approximate time required to cover the given area with water (t), is given by the equation:

Where Q = Discharge through the supply ditch

A = Area of land strip to be irrigated

t = Time required to cover the given area A 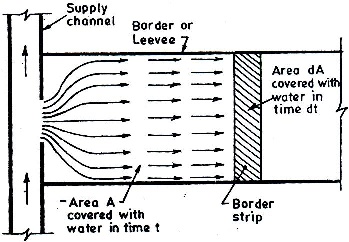 The above equation can be obtained by considering small area (dA) of the border strip of area A, as shown in figure. Let us also assume that in time dt, water advances over this area dA. Now, the volume of water that flows to cover this area would be y dA, because y is the water depth over this area. Also, during the same time dt, the volume of water that percolates into the soil over the area A would be f. A. dt. The total quantity of water supplied to the strip during time dt would be Q dt and also equal to y. dA + f.A.dt.

Example: Determine the time required to irrigate a strip of land of 0.04 hectares in area from a tube â€'well with a discharge of 0.02 cumec. The infiltration capacity of the soil may be taken as 5 cm/hr, and the average depth of flow on the field as 10 cm. Also determine the maximum area that can be irrigated from this tube well.

Using equation we have

Maximum area that can be irrigated is given by equation

Note: After irrigating this much of area, surface flow will stop, and deep percolation will start.

Check flooding is similar to ordinary flooding except that the water is controlled by surrounding the check area with low and flat levees. Levees are generally constructed along the contours, having vertical interval of about 5 to 10 cm. the confined plot are varies from 0.2 to 0.8 hectare. 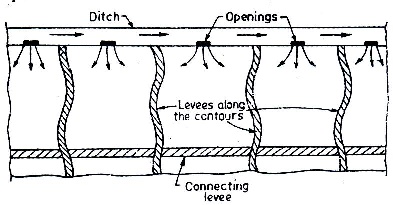 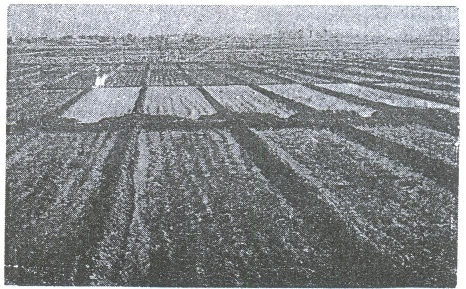 In check flooding, the check is filled with water at a fairly high rate called and allowed to stand until the water infiltrates.

This method is a special type of check flooding and is adopted specially for orchard trees. One or more trees are generally placed in the basin, and the surface is flooded as in check method, by ditch water, as shown in figure. 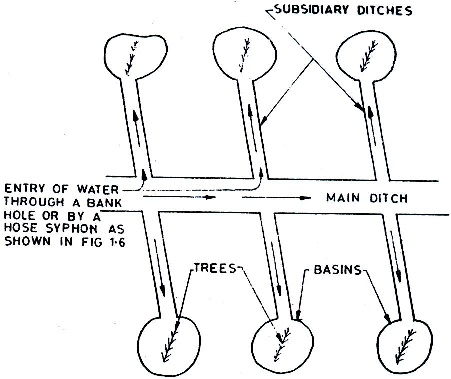 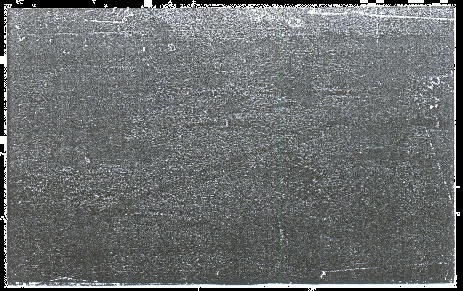 In flooding methods, described adove, water covers the entire surface; while in furrow irrigation method only one â€'fifth to one â€'half of the land surface is wetted by water. It therefore, results in less evaporation, less pudding of soil, and permits cultivation sooner after irrigation. 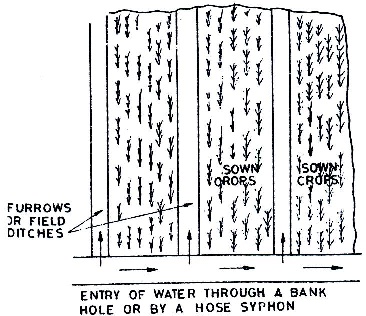 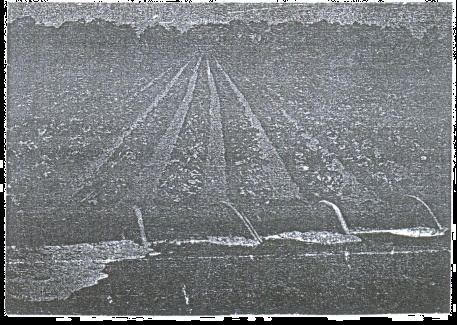 Furrows are narrow field ditches, excavated between rows of plants and carry irrigation water through them. Spacing of furrows is determined by the proper spacing of the plant. Furrows vary from 8 to 30 cm deep, and may be as much as 400 metres long.

In this farm â€'water application method, water is applied to the soil in the form of a spray through a network of pipes and pumps. It is a kind of an artificial rain and, therefore, gives very good results. It is a costly process and widely used in U.S.A. It can be used for all types of soils and for widely different topographies and slopes. It can advantageously be used for many crops, because it fulfils the normal requirement of uniform distribution of water. This method possesses great potentialities for irrigating areas in Rajasthan in India, where other types of surface or sub â€' surface irrigation are very difficult. 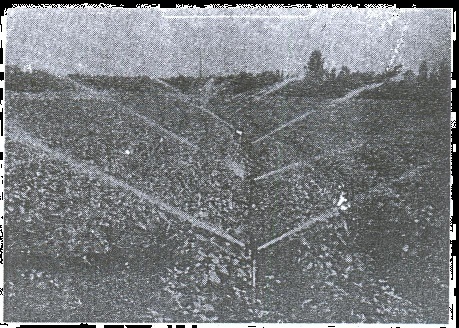 Figure: Photo view of a sprinkler system in operation (using a rotary head)

In spite of the numerous advantages which this method possesses over the other methods, it has not become popular in India for the simple reason that ours is a poor and a developing nation. This method is not only costly but requires a lot of technicalities. The correct design and efficient operation are very important for the success of this method. Special steps have to be taken for preventing entry of silt and debris, which are very harmful for the sprinkler equipment. Debris â€'choke nozzles; interfere with the application of water on the land; while the abrasive action of silt causes excessive wear on pump impellers, sprinkler nozzles, and bearings. The system is to be designed in such a way that the entire sprayed water seeps into the soil, and there is no run off from the irrigated area.

The conditions favouring and adoption of this method, are:

1.     When the land topography is irregular, and hence unsuitable for surface irrigation.

2.     When the land gradient is steeper, and soil is easily erodible.

3.     When the land soil is excessively permeable, so as not to permit good water distribution by surface irrigation; or when the soil is highly impermeable.

5.     When the area is such that the seasonal water requirement is low, such as near the coasts.

a.     As to require humidity control, as in tobacco;

b.     Crops having shallow roots; or

7.     When the water is available with difficulty and is scarce.

Earlier, the fixed overhead perforate pipe installations were being used for sprinkler network; but with the advent of light weight steel pipes and quick couplers, portable systems have been designed.

In the sprinkler irrigation network, we have the mains and the submains, through which water under pressure is made to flow. Revolving sprinkler heads are then usually mounted on rising pipes attached to the laterals. The water jet comes out through the revolving sprinkler heads, with force. When sprinkler heads are not provided, perforations are made in the pipes, and they are provided with nozzles, through which water jets out and falls on the ground. Generally, such a perforated pipe system operates at low heads; whereas, the revolving heads sprinklers operate on high as well as low heads, depending upon the type of rotary head used.

The advantage of sprinkler irrigation are enumerated below:

(i)                Seepage losses, which occur in earthen channels of surface irrigation methods, are completely eliminated. Moreover, only optimum quantity of water is used in this method.

(ii)             Land leveling is not required, and thus avoiding removal top fertile soil, as happens in other surface irrigation methods.

(iii)           No cultivation area is lost for making ditches, as happens in surface irrigation methods. It, thus, results in increasing about 16% of the cropped area.

(iv)           In sprinkler system, the water is to be applied at a rate lesser than the infiltration capacity of the soil, and thus avoiding surface run, and its bad effects, such as loss of water, washing of top soil, etc.

(v)             Fertilizers can be uniformly applied, because they are mixed with irrigation water itself.

(vi)           This method leaches down salts and prevents waterlogging or salinity.

(vii)        It is less labour oriented, nad hence useful where labour is costly and scarce.

The liminations of sprinkler irrigation nare also enumerated below:

(i)                High winds may distort sprinkler pattern, causing nonuniform spreading of water on the crops.

(iii)           They are not suited to crops requiring frequent and larger depths of irrigation, such as paddy.

(iv)           Initial cost of the system is very high, and the system requires a high technical skill.

(v)             Only sand and silt free water can be used, as otherwise pump impellers lifting such waters will get damaged.

(viii)      A constant water supply is needed for commercial use of equipment.

Delhi office also. This firm and its publications can be referred to, for specialized knowledge in this branch of field irrigation.

(7) Drip irrigation Method. Drip irrigation, also called trickle irrigation, is the latest field irrigation technique, and is meant for adoption at places where there exists acute sczrcity of irrigation water and other salt problems. In this method, water is slowly and directly applied to the root zone of the plants, thereby minimizing the losses by evaporation and percolation.

This system involves laying of a system of head, mains, submains, laterals, and drop nozzles. Water oozes out of these small drip nozzles uniformly and at a very small rate, directly into the plant roots area.

The mains and submains are the specially designed small sied pipes, made of flexible material like black PVC. These are generally buried or laid on the ground, as shown in fig. Their sizes should be sufficient to carry the design discharge of the system.

The laterals are very small sized (usually 1 to 1.25 cm dia), specially designed, black PVC pipes, taking off from the mains or submains, Laterals can usually be up to 50 m long, and one lateral line is laid for each row of crop. Hardie Biwall is a patented name of a special dual chambered micro tubing, manufactured from a linear low density polyethylene, and is being used these days for laterals.

The drip nozzles, also called emitters, or valves, are fixed on laterals, at regular intervals of about 0.5 to 1 m or so, discharging water at very small rates of the order of 2 to 10 litres per hour.

Like the sprinkler system, this method also involves specialized knowledge, and is not being adopted by our ordinary farmers. This method, is howeer, being used for small nurseries, orchards, or gardens. The widely known commercial Indian Company, which specialses in this

Code: 425001. This firm can be contacted in special needs for layout of such an irrigation system.