Systemic mycoses are caused by dimorphic fungi; these infections are acquired by inhalation of spores.

The opportunistic systemic mycoses are infections found in patients with underlying pre disposing conditions. It is produced by non pathogenic or contaminant fungi in a host, where the immunological defense mechanisms are weakened by endogenous causes like cancer, leukemia or exogenous causes like immunosuppressive therapy and AIDS. The examples of opportunistic mycoses are Candidiasis, Cryptococcosis, Aspergillosis and zygomycosis.

Candidiasis is the commonest fungal disease found in humans affecting mucosa, skin, nails and internal organs of the body. It is caused by yeast like fungi called Candida albicans . The infection may be acute or chronic, superficial or deep and found mainly as secondary infection in individuals with immune compromised condition.

The fungus candida albicans is response ble for most vaginal yeast infections. Your vagina naturally contains a balancedmix of yeast, including candida, and bacteria. Certain bacteria (lactoba-cillus) act to prevent an overgrowth of yeast. But that balance can be disrupted.

Some of the virulence factors contributing to pathogenicity are toxins, enzymes and adhesion. The organism adheres to the epithelial and endothelial cells by proteinase production. Then the yeast cells of Candida encounter a particular host tissue and colonization takes place at the local site or they invade deeper into the host tissue and induce various clinical symptoms.

The Candida speciesare found as commensal on mucosal surfaces of the body. They cause disease as and when conditions are favourable. This yeast like fungi colonizes mucocutaneous surfaces, which can be portals of entry into deeper tissues when the host defenses are compromised. They may cause a simple lesion to event the life threatening systemic infection.

The clinical manifestations of Candidiasis are divided into two broad categories. They are:

i. Oral Candidiasis – Most common form of Candida colonizes on the oral cavity. Oral thrush is infection of the buccal mucosa, gums, tongue. Reddening of the mucous membrane gives dry, smooth metallic taste and burning at the local site (Figure 9.9). 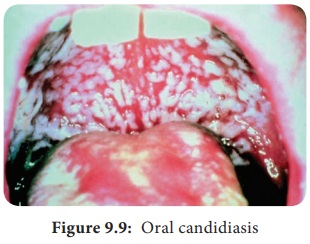 ii. Alimentary Candidiasis – Candida colonizes on the oesophagus causing oesophagitis. It is mostly asymptomatic or it may cause burning pain in the epigastrium or throat.

i. Diaper Dermatitis – Candida that colonize on the cutaneous layer causes cutaneous Candidiasis, leading to maculopapules vesicles with erythematous rash. This is common among infants and known as Diaper rash.

ii. Intertrigo – This is an inflammatory lesion of the skin folds due to candidal infection.

Allergic manifestation is caused due to the metabolites of Candida. The cutaneous allergies are urticaria and eczema, and bronchial asthma.

Specimens collected are mucous membrane from the mouth, vagina, skin and sputum based on the site of involvement.

Presence of yeast cells approximately 4.8 µm with budding and pseudo hyphae are observed. Other stains like periodic acid - Schiff stain and Gomori’s methylamine silver stain are also used to observe the fungal elements in tissue.

The clinical specimens can be cultured on Sabouraud dextrose agar (SDA) with antibiotics and incubated at 25°C and 37°C (Figure 9.10). The colonies appear in 3–4 days as cream coloured, smooth and pasty.

Some of the species of Candida are andida albicans, Candida tropicalis, Candida krusei and Candida glabrata.

The culture of Candida species is treated with sheep or normal human serum and inoculated at 37°C for 2 to 4 hours. A drop of suspension is examined on the slide. The germ tubes are seen as long tube–like projections extending from the yeast cells. The demonstration of the germ tube is known as Reynolds – Braude phenomenon.

Sugar fermentation and assimilation tests are used for the identification of Candidal species. C.albicans ferments Glucose and Maltose and assimilates Glucose, Maltose, Sucrose, Lactose and Galactose

Candida isolates are grown on corn meal, agar (CHN) or rice starch agar (RSA) and incubated at 25°C for 2–3 days. The formation of large, thick walled terminal chlamydospores is demonstrated in C.albicans and C. dubliniensis.

1. 1% gentian violet is locally applied to the affected areas.

2. The azole creams like Clotrimazole, Miconazole, Ketoconazole and Econazole are also used

Cryptococcosis is an acute, sub acute or chronic fungal disease caused by encapsulated yeast called Cryptococcus neoformans. It is pathogenic to man and animals. It causes opportunistic infection, involving the lungs and disseminates to extra pulmonary sites through circulation to different body organs particularly to central nervous system causing Meningoencephalitis.

What does Cryptococcus cause?

Meningitis can be caused by different germs, including bacteria, fungi, and viruses. Two types of fungus can cause cryptococcal meningitis (CM). They are called Cryptococcus neoformans (C. neoformans) and Cryptococcus gattii (C. gattii). This disease is rare in healthy people.

Cryptococcal infection occurs through inhalation of small forms or basidiospores. The fungus may remain dormant in the lungs until the immune system weakens and then can disseminate to the central nervous system and other body sites.

The clinical features of Cryptococcosis depend upon the anatomical sites.

The respiratory route is usually the portal of entry for propagules in Pulmonary Cryptococcosis that subsequently disseminate to extra pulmonary sites. The symptoms are dry cough, dull chest pain and milder or no fever with small gelatinous granules all over the lungs

This is an infection of brain and meninges leading to Meningoencephalitis. Nitrogenous source such as asparagines and creatinine present in cerebrospinal fluid enrich the yeast. The symptoms are nausea, dizziness, impaired memory, blurred vision and photophobia. The enlarged granulomatous cerebral lesions are called cryptococcoma.

Specimens collected are mainly serum, CSF and other body fluids.

10% Nigrosin or India ink staining, Gram staining and LPCB are used to visualize the yeast cell.

Biopsy material is stained with periodic acid - Schiff and Gomoris’s methylamine silver stain to observe the fungal cells in the tissue. Round budding yeast cells with a distinct halo gelatinous capsule can be seen (Figure 9.11a). Gram positive budding yeast cells are demonstrated by Gram staining.

The clinical specimens can be cultured on Sabouraud dextrose agar, Bird Seed agar and incubated at 37°C. The colonies are mucoid, cream to buff - colored in SDA (Figure 9.11b), whereas brown colored due to conversion of the substrate into melanin by Phenoloxidase in BSA (Figure 9.11c).

1. Amphotericin B, Flucytosine is given together as induction and maintenance therapy.

Saccharomyces cerevisiae Fungemia: An Emerging Infectious Disease. Saccharomyces S cerevisiae is well known in the baking and brewing industry andis also used as a probiotic in humans. However, it is a very uncommon cause of infection in humans.