Dermatophytoses are the most common cutaneous fungal infection seen in man and animals affecting skin, hair and nails.

Dermatophytoses are the most common cutaneous fungal infection seen in man and animals affecting skin, hair and nails. The fungi can invade the keratinized tissues of skin and its appendages and they are collectively known as Dermatophytes or Tinea or ring worm infection. The dermatophytes are hyaline septate molds. They are divided into three main anamorphic genera depending on their morphological characteristics.

i. Trichophyton [Cause infection in skin, hair and nails]

ii. Microsporum [Cause infection in skin and hair]

iii .Epidermophyton [cause infection in skin and nail]

The fungal species affecting humans are known as anthropophilic. Those inhabitating domestic and wild animals as well as birds are called zoophilic. Fungi species from soil are known as geophilic dermatophytes.

HOTS: What are the sources of dermatophytes?

The dermatophytes grow within dead keratinized tissue and produce keratinolytic proteases, which provide means of entry into living cells. Fungal metabolic products cause erythema, vesicles and pustule on the site of infection. Some dermatophytes species like soil saprobes digest the keratinaceous debris in soil and are capable of parasitizing keratinous tissues of animals

The clinical manifestations of Dermatophytoses are also called Tinea or Ringworm depending on the anatomical site involved. Following are the common clinical conditions produced by dermatophytes:

1. Tinea Capitis: This is an infection of the shaft of scalp hairs. It can be inflammatory (eg. Kerion, Favus) or non - inflammatory (Black dot, Seborrheic dermatitis). The infected hairs appear dull and grey (Figure 9.5a). Breakage of hair at follicular orifice which creates patches of alopecia with black dots of broken hair. It is caused by Trichophyton species.

2. Tinea Corporis: This is an infection on the glabrous (non - hairy) skin of body. Erythematous scaly lesions with sharply marginated raised border appear on the infected areas (Figure 9.5b). It is caused by Trichophyton rubrum.

3. Tinea Imbricata: It forms concentric rings of scaling on the glabrous skin, leading to lichenification. It is caused by Trichophyton concentricum

4. Tinea Gladiatorum: This infection is common among wrestlers and athletes. Lesions are seen on arms, trunk or head and neck. It is caused by Trichophyton tonsurans.

5. Tinea Incognito: It is steroid modified Tinea caused as a result of misuse of corticosteroids in combination with topical antimycotic drugs.

6. Tinea Faciei: This is an infection of skin of face except beard. Erythematous annular plaques are formed. It is one of the forms of Tinea incognito.

7. Tinea Barbae: This is the infection of the beard and moustache areas of the face. This is also called barber’s itch. It is caused by Trichophyton mentagrophytes, Trichophyton rubrum and Microsporum canis. Erythematous patches on the face with scaling appear and these develop folliculitis.

8. Tinea Pedis: This is an infection of the foot, toes and interdigital web spaces. This is seen among the individuals wearing shoes for long hours and known as Athlete’s foot (Figure 9.5c). Erythema and scaling associated with itching and burning sensation appear with thin fluid discharging from small vesicles. It is caused by Trichophyton mentagrophytes,Trichophyton rubrum and Epidermophyton floccosum.

9. Tinea Cruris: This is an infection of the groin in men who use long term tight fitting garments. Erythematou sharp margin lesions known as Jock itch. It is caused by Trichophyton rubrum and Epidermophyton floccosum.

10. Tinea Manuum: This is an infection of the skin of palmar aspect of hands. It causes hyperkeratosis of the palms and fingers. It is caused by Trichophyton mentagrophytes, Trichophyton rubrum and Epidermophyton floccosum.

11. Tinea Unguium: This is an infection of the nail plates. The infection spreads on the entire nail plate infecting the nail bed. It results in opaque, chalky or yellowish thick ended nail. It is caused by Trichophytonmentagrophytes, Trichophyton rubrum and Epidermophyton floccosum 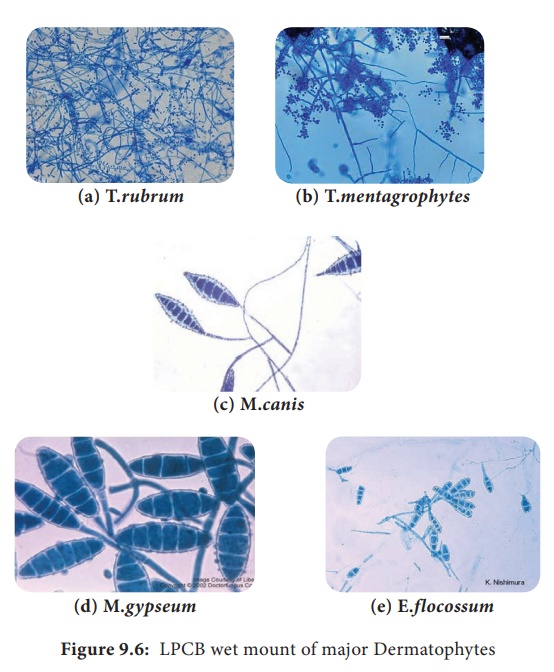 How do dermatophytes cause disease in humans?

Dermatophytosis is a common contagious disease caused by fungi known as dermatophytes. Dermatophytes belong to a group of organisms that are able to break down the keratin in tissues such as the epidermis, hair, nails, feathers, horns and hooves.

Samples are subjected to KOH (10%) wet mount, the affected site were disinfected with alcohol before collecting the clinical specimen.

The samples are inoculated on Sabouraud dextrose agar (SDA) with antibiotics and cycloheximide and are incubated at 25°C–35°C. The colony morphology can be identified.

The three genera of dermatophytes are Trichophyton, Microsporum and Epidermophyton (Table 9.1). They are identified based on morphology of the macro conidia, micro conidia, their shape, position on the spore bearing hyphae such as spiral hypha, racquet hypha, nodular pectinate body. 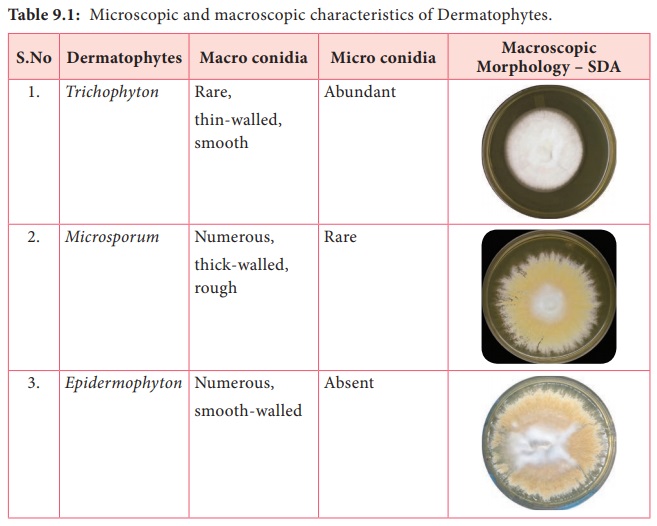 Clinical samples are exposed to Wood’s lamp. Wood’s glass consists of Barium silicate containing 9% Nickel oxide. It transmits long wave ultra violet light with a peak of 365nm that shows a characteristic fluorescence produced by the samples. The patterns of fluorescence are bright green, golden yellow and coral red. Microsporum species and Trichophyton species are differentiated using this technique.

It involves brushing the scalp with a sterile plastic hair brush, which is then inoculated into an appropriate culture medium by plates, is incubated at 25°C–35°C. The colony morphology can be identified.

Dermatophyte infections, also known as tinea, are the most common fungal infections of the skin, hair, and nails.The term “dermatophyte” refers to fungal species that infect keratinized tissue, and includes members of the Trichophyton, Microsporum, and Epidermophyton genera

Whitfield’s ointment is used for all Tinea infections. Oral griseofulvin is the drug of choice for nails and scalp infections. Itraconazole and terbinafine may be given as pulse therapy.