Chapter: Introduction to Botany: Multicellularity, the Cell Cycle and the Life Cycle

1. Sexual Process and the Syngamy 2. Meiosis

1. Sexual Process and the Syngamy

A sexual process is important to the survival of a species. First, it makes the pop-ulation more diverse, which allows more flexibility to adapt via natural selection. Natural selection means that all organisms are different, but if environmentalconditions change, only most adapted will survive. If the population is uniform, it has less chance of survival. Second, it prevents lethal mutations from being transferred to the offspring, because those with the mutations will die instead of passing on these genes. The later happens when the mutated gene is either duplicated or alone in genotype.

(Genotype is a gene content of the organism. A gene is a piece of DNA, which is equal to one protein. A mutation is a “mistake” in DNA. A protein (many of them are enzymes) is made up of amino acids chained together. A population is a group of organisms which potentially may interbreed and have no isolation barriers.)

To make populations more diverse, organisms need to exchange DNA. One way that cells exchange genes is through syngamy. Syngamy (frequently labeled by “Y!”), is the fusion of two cells, resulting in a cell that has twice as many chro-mosomes. The two cells which are fused together are called gametes, and the resulting cell is azygote. The goal of syngamy is the renovation of genetic mate-rial. The new cells have genotype different from the gametes. Continuous syn-gamy will increase the amount of DNA, so cells use meiosis (frequently labeled by “R!”) to counterbalance this side-effect of syngamy:

There are three types of syngamy (Fig. 4.4): isogamy, heterogamy, and oogamy. Isogamy happens when the gametes that fuse together have different geno-types.Heterogamy is when the gametes are of two different sizes. The female is larger because it has resources to care for the offspring, whereas the males are smaller and can increase in number to allow competition and make fertiliza-tion more likely. Oogamy is when the gametes also have different mobility. In oogamy, the non-motile female is known as the oocyte, and the flagellate male as the spermatozoon, which is only one mobile gamete here. In some organisms (red algae, sponges, crustaceans, most seed plants), spermatozoon become non-motile spermation so it will need external agents to move it. Both spermatozoa and spermatia are called sperms.

Syngamy is the way for organisms to become more genetically diverse, but since it increases the amount of chromosomes, it needs to be balanced by meiosis. Meiosis reduces the number of chromosomes, recombines the chromosomes, and allows chromosomes to exchange their genetic material.

Meiosis is a reductive form of cell division, where each new cell receives half ofthe original cell’s chromosomes. Unlike mitosis, meiosis does change the geno-type of cells because whole chromosomes are recombined and also exchanged their genetic material. Another difference is that in mitosis, ploidy (“twoness” of chromosomes) stays constant, while in meiosis, ploidy halves.

There are two problems of meiosis: first, how to find out which chromosomes are homologous; and second, how to split chromosomes which were already du-plicated in S-phase. First problem is solving with “gluing” homologous chro-mosomes together; this happens because similar chains of DNA can attach each other. Second problem is usually solving with the second stage of meiosis which is quite similar to ordinary mitosis.

There are two stages of meiosis: a reductive division (meiosis I, unique) and an equal division (meiosis II, similar to mitosis). Each of these stages are divided into prophase, metaphase, anaphase, and telophase. In prophase I, chromosomes conjugate (form synapses), and start to exchange DNA (crossing-over). In anaphase I, chromosomes from each pair will go independently to different poles:

Telophase I usually flows into prophase II. This second division of meiosis is very similar to mitosis without synthetic stage before it. Frequently, nuclei do not form until telophase II (Fig. 4.5). 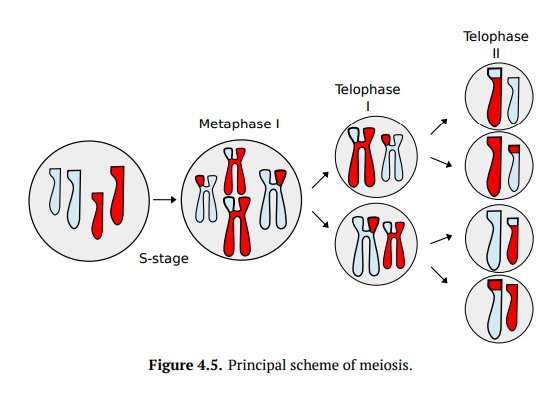 In the first division, cell needs to split pairs of homologs to reduce ploidy. The second division of meiosis is necessary because DNA was already duplicated in the synthetic stage of the cell cycle. Consequently, every X-like chromosome needs to be split into two I-like chromosomes:

This is why there are two divisions. If DNA would not be duplicated before, it is also possible for meiosis to happen in one stage instead of two. This kind of meiosis is described in some protists.

It is possible that meiosis won’t work properly, which results in a cell receiving a double set of chromosomes. If, in turn, that cell goes to syngamy, the resulting zygote will have 3 sets of chromosomes. Cells with more than two sets of chro-mosomes are called polyploids. Rarely, only some chromosome pairs do not want to split. In this case, after the syngamy, some chromosomes will be “trip-licated” (trisomy). This is aneuploidy. One example of frequent (1/800 births) aneuploidy in humans is Down syndrome.