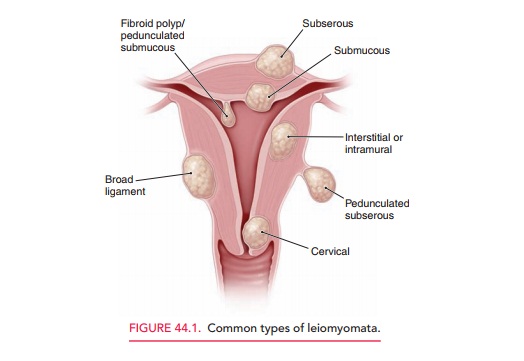 Bleeding is the most common presenting symptom in uterine fibroids.

Bleeding is the most common presenting symptom in uterine fibroids. Although the kind of abnormal bleeding may vary, the most common presentation includes the development of progressively heavier menstrual flow that lasts longer than the normal duration (menorrhagia, defined as menstrual blood loss of >80 mL). This bleeding may result from significant distortion of the endometrial cavity by the underlying tumor. Three generally accepted but unproved mechanisms for increased bleeding include:

·        Inability of the overlying endometrium to respond to the normal estrogen/progesterone menstrual phases, which contributes to efficient sloughing of the endo-metrium

·        Pressure necrosis of the overlying endometrial bed, which exposes vascular surfaces that bleed in excess of that normally found with endometrial sloughing

Characteristically, the best example of leiomyoma con-tributing to this bleeding pattern is by the so-called sub-mucous leiomyoma. In this variant, most of the distortioncreated by the smooth muscle tumor projects toward the endometrial cavity, rather than toward the serosal surface of the uterus. Enlarging intramural fibroids likewise may contribute to excessive bleeding if they become large enough to significantly distort the endometrial cavity.

Blood loss from this type of menstrual bleeding may be heavy enough to contribute to chronic iron-deficiencyanemia and, rarely, to profound acute blood loss. Theoccurrence of isolated submucous (subendometrial) leiomy-omata is unusual. Commonly, these are found in association with other types of leiomyomata (Fig. 44.1). 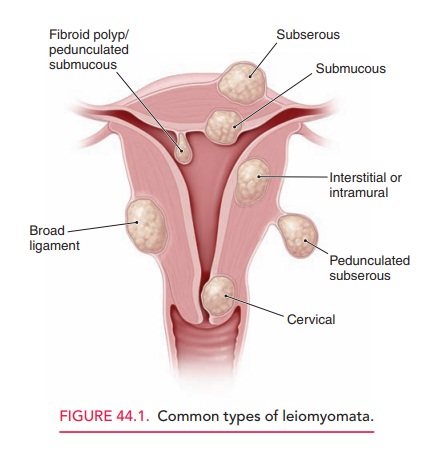 Another common symptom is a progressive increase in “pelvic pressure.” This may be a sense of progressive pelvicfullness, “something pressing down,” and/or the sensation of a pelvic mass. Most commonly, this is caused by slowly enlarging myomas, which on occasion may attain a mas-sive size. These leiomyomata are the most easily palpated on bimanual or abdominal examination and contributes to

characteristic “lumpy-bumpy,” or cobblestone, sensa-tion when multiple myomas are present. Occasionally, these large myomas present as a large asymptomatic pelvic or even abdominopelvic mass. Such large leiomyomata may cause an uncommon but significant clinical problem: pressure on the ureters as they traverse the pelvic brim leading to hydroureter (dilation of the ureter) and possi-bly hydronephrosis (dilation of the renal pelvis and calyces). These conditions can also occur if fibroids lower within the pelvis grow laterally between the leaves of the broad ligament.

Another presentation is the onset of secondary dys-menorrhea. Other pain symptoms, although rare, may bethe result of rapid enlargement of a leiomyoma. This can result in areas of tissue necrosis or areas of subnecrotic vas-cular ischemia, which contribute to alteration in myome-trial response to prostaglandins similar to the mechanism described for primary dysmenorrhea. Occasionally, torsion of a pedunculated myoma can occur, resulting in acute pain. Dull, intermittent, low midline cramping (labor-like) pain is the clinical presentation when a submucous (sub-endometrial) myoma becomes pedunculated and progres-sively prolapses through the internal os of the cervix.