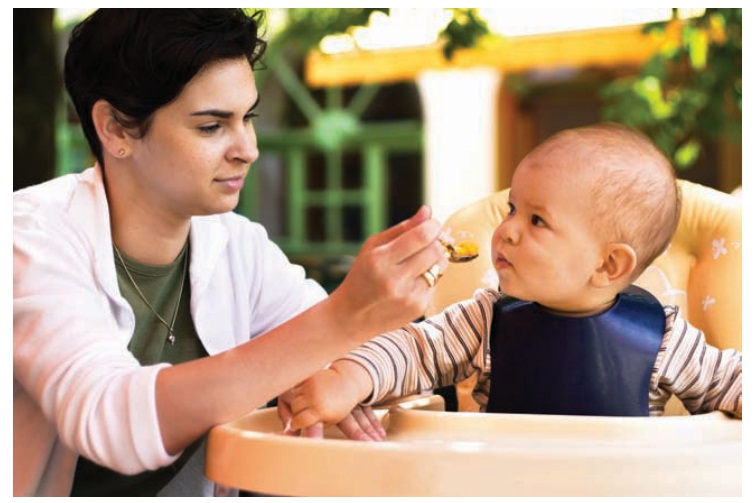 The age at which infants are introduced to solid and semi-solid food has varied considerably over the years.

The age at which infants are introduced to solid and semi-solid food has varied considerably over the years. At the beginning of the last century, doctors advocated that children be fed only breast milk during their first 12 months. By the 1950s, in response to parental demand, some pediatricians advised the introduction of solid food before the age of 1 month. Now, the general recom-mendation is that the infant’s diet be limited to breast milk or formula until the age of 4 to 6 months and that breast milk or formula remain the major food source until the child is 1 year old. With the appropriate supplements of iron and vitamin D and possibly vitamin C and fluoride, breast milk or formula fulfills the nutritional requirements of most children until they reach the age of 6 months.

The introduction of solid foods before the age of 4 to 6 months is not recommended. The child’s gastrointestinal tract and kidneys are not suffi-ciently developed to handle solid food before that age. Further, it is thought that the early introduction of solid foods may increase the likelihood of overfeeding and the possibility of the development of food allergies, particularly in children whose parents suffer from allergies.

An infant’s readiness for solid foods will be demonstrated by (1) the physical ability to pull food into the mouth rather than always pushing the tongue and food out of the mouth (extrusion reflex disappears by 4–6 months), (2) a willingness to participate in the process (Figure 12-6), (3) the ability to sit up with support, (4) having head and neck control, and (5) the need for additional nutrients. If the infant is drinking more than 32 ounces of formula or nursing 8 to 10 times in 24 hours and is at least 4 months old, then solid food should be started. 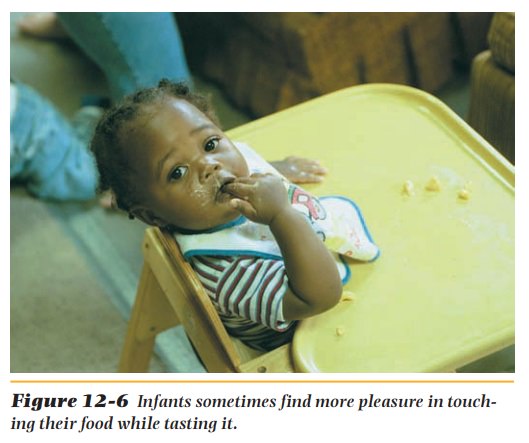 Solid foods must be introduced gradually and individually. One food is introduced and then no other new food for 4 or 5 days. If there is no allergic reac-tion, another food can be introduced, a waiting period allowed, then another, and so on. The typical order of introduction begins with cereal, usually iron-fortified rice, then oat, wheat, and mixed cereals. Cooked and pureed vegetables follow, then cooked and pureed fruits, egg yolk, and, finally, finely ground meats. Between 6 and 12 months, toast, zwieback, teething biscuits, and Cheerios can be added in small amounts. Honey should never be given to an infant because it could be contaminated with Clostridium botulinum bacteria. When the infant learns to drink from a cup, juice can be introduced (Figure 12-7). Juice should never be given from a bottle because babies will fill up on it and not get enough calories from other sources. Pasteurized apple juice is usually given first. It is recommended that only 4 ounces per day of 100% juice products be given because they are nutrient-dense. 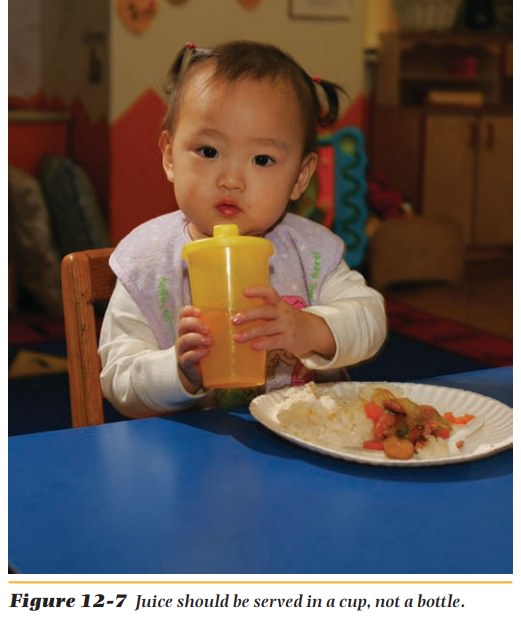 Babies differ in the amount of food they eat from day to day. An infant will let you know when he or she is full by the following:

• Playing with the nipple on a bottle or a breast

• Playing with food and not eating

Adults may try to overfeed infants when solid food is introduced. The guidelines in Table 12-1 may be helpful. 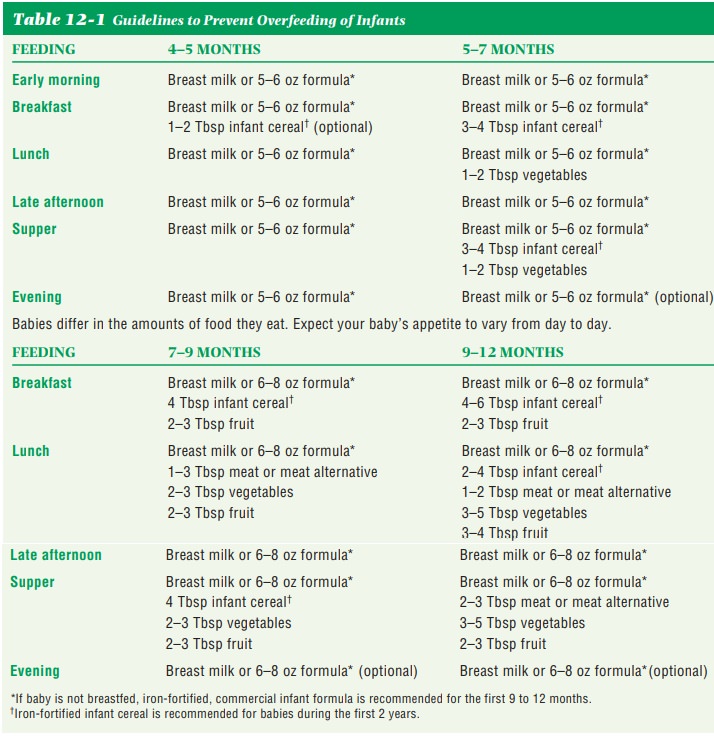 By the age of 1 year, most babies are eating foods from all of the MyPyr-amid groups and may have most any food that is easily chewed and digested. However, precautions must be taken to avoid offering foods on which the child can choke. Examples include hotdogs, nuts, whole peas, grapes, popcorn, small candies, and small pieces of tough meat or raw vegetables. Foods should be selected according to the advice of the health care provider or pediatrician. It is not necessary to use the commercially prepared “third” foods. Table foods generally can be used, though they may need to first be mashed or run through a blender.

MyPyramid provides excellent help in determining the baby’s menu. Its use will help supply the appropriate nutrients and develop good eating habits.

It is particularly important at this time to avoid excess sugar and salt in the infant’s diet so that the child does not develop a taste for them and, conse-quently, overuse them throughout life.

Weaning actually begins when the infant is first given food from aspoon (Figure 12-8). It progresses as the child shows an interest in and an ability to drink from a cup. The child will ultimately discard the bottle or refuse the breast. If the child shows great reluctance to discard the bottle or still seeks the breast, the parents should be patient and discuss this with their health care provider. 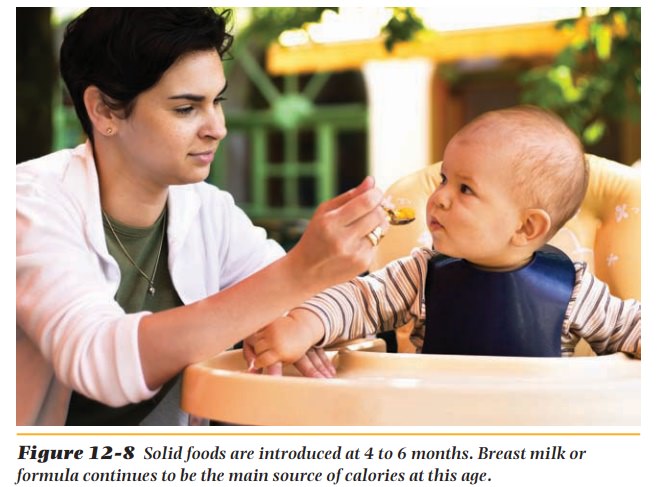