Some infants are born with the inability to metabolize specific nutrients.

Some infants are born with the inability to metabolize specific nutrients. These congenital disabilities are called inborn errors of metabolism. They are caused by mutations in the genes. There is great variation in the seriousness of the conditions caused by these defects. Some cause death at an early age, and some can be minimized so that life can be supported by adjustments in the normal diet. Among children born with these defects, there is, however, the common danger of damage to the central nervous system because of their abnormal body chemistry. This results in mental retardation and sometimes retarded growth. Early diagnosis of these inborn errors, combined with diet therapy, increases the chances of preventing retardation. Hospitals test newborns for some of these disorders as a matter of course. If there is a family history of a certain genetic disorder, genetic screening can be done. In addition, some of these abnormalities can be discovered by amniocentesis.

Galactosemia is a condition, affecting 1 in 30,000 live births, in which thereis a lack of the liver enzyme transferase. Transferase normally converts galac-tose to glucose. Galactose is the simple sugar resulting from the digestion of lactose, the sugar found in milk. When transferase is missing and the infant ingests anything containing galactose, the amount of galactosein the blood becomes so excessive that it is toxic.

The newborn suffers diarrhea,vomiting, and edema, and the child’s liver does not function normally. Cataracts may develop, galactosuria occurs, and mental retardation ensues.

Diet Therapy.Diet therapy for galactosemia is the exclusion of anythingcontaining milk from any mammal. During infancy, the treatment is relatively simple because parents can feed the baby lactose-free, commercially prepared formula and can provide supplemental minerals and vitamins. As the child grows and moves on to adult foods, parents must be extremely careful to avoid any food, beverage, or medicine that contains lactose. Nutritional supplements of calcium, vitamin D, and riboflavin must be given so that the diet is nutrition-ally adequate. This restricted diet may be necessary throughout life, but some physicians allow a somewhat liberalized diet as the child reaches school age. This may mean only small amounts of baked or processed foods that contain small amounts of milk. Even this restricted diet must be accompanied by careful and regular monitoring for galactosuria.

In phenylketonuria (PKU), infants lack the liver enzyme phenylala-nine hydroxylase, which is necessary for the metabolism of the amino acid phenylalanine. Infants seem to be normal at birth, but if the disease is nottreated, most of them become hyperactive, suffer seizures between 6 and 18 months, and become mentally retarded. Public health law requires most hospitals today to screen newborns for phenylketonuria. PKU babies typically have light-colored skin and hair.

Diet Therapy.There is a special, nutritionally adequate, commercial infantformula available for PKU babies. It is called Lofenalac. It has had 95% of pheny-lalanine removed from its protein source. It provides just enough phenylalanine for basic needs but no excess. The specific amount depends on the infant’s size and growth rate. Regular blood tests determine the adequacy of the amounts. Diets are carefully monitored for calorie and nutrient content and are adjusted frequently as needs change. Except for fats and sugars, there is some protein in all foods. Some of that protein is phenylalanine, so diets for the growing child eating normal food must be carefully planned. There are two varieties of synthetic milk available for older children. They are Phenyl-free and PKU-1, -2, or -3. None of these contains any phenylalanine. They can be used as beverages or in puddings and baked prod-ucts. Diets should be monitored throughout life to avoid mental retardation and to control hyperactivity and aggressive behavior (Table 12-2). 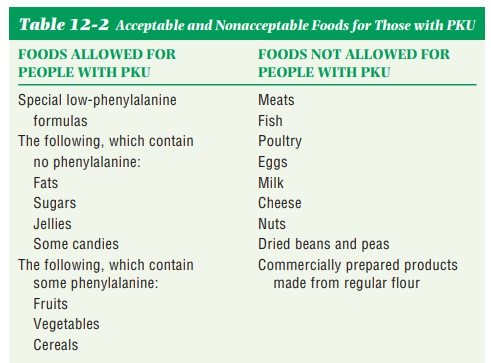 Maple syrup urine disease (MSUD) is a congenital defect resulting in theinability to metabolize three amino acids: leucine, isoleucine, and valine. It is named for the odor of the urine of these infants and affects 1 in 100,000 to 300,000 live births. When the infant ingests food protein, there are increased blood levels of these amino acids, causing ketosis.

Hypoglycemia, apathy, and convulsions occur very early. Depending on the extent of the disease, if not treated promptly, the child can die from acidosis. Mild forms of the disease, if left untreated, will cause mental retardation and bouts of acidosis.