Home | | The Diversity of Fishes: Biology Evolution and Ecology | Subdivision Osteoglossomorpha - teleostean fishes
Posted On :  07.08.2017 10:16 am

The osteoglossomorph bonytongues and their relatives are generally considered the most primitive living teleosts.

A survey of living teleostean fishes

The osteoglossomorph bonytongues and their relatives are generally considered the most primitive living teleosts (Fig. 14.2). They occur in fresh water on all major continents except Europe, although only Africa has more than a few species (see  Archaic freshwater fish distributions). Although chiefly a tropical group, two species (the Mooneye, Hiodon tergisus, and Goldeye, H. alosoides) occur in major river systems of northern North America. The Arapaima or Pirarucu of South America (Arapaima gigas) is one of the world’s largest freshwater fishes, reaching a length of 2.5 m. Arapaima have been stocked in lakes and reservoirs in Southeast Asia, where they are actively sought as sport fish. Anatomically, the group gets its common name from well-developed teeth on the tongue that occlude (bite) against similarly toothed bones (parasphenoid, mesopterygoid, ectopterygoid) in the roof of the mouth. 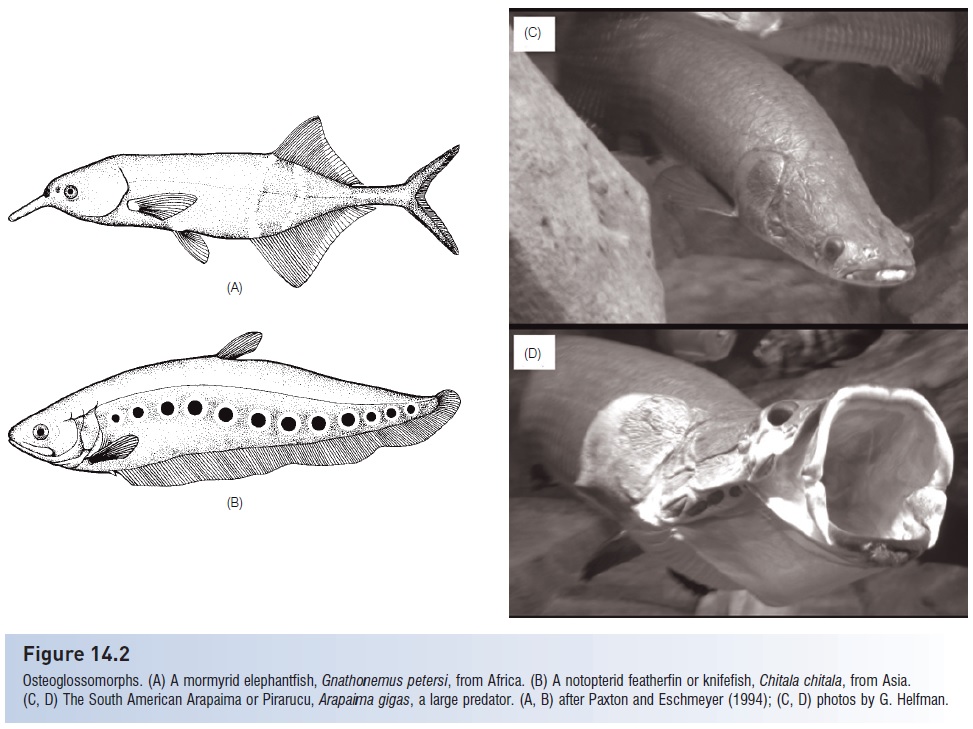 The South American Arawana (Osteoglossum bicirrhosum), the African Butterflyfish, Pantodon buchholzi, the notopterid featherfins or Old World knifefishes, and the mormyrid elephantfishes are popular aquarium species. The Asian Arawana or Golden Dragonfish, Scleropages formosus (Fig. 14.3), has been depleted in the wild due to overcollecting and is now protected in Appendix I of the Convention on International Trade in Endangered Species of Wild Fauna and Flora (CITES). Mormyrids, the most speciose family in the subdivision with >200 species, and the related Gymnarchus niloticus, possess a highly evolved electrical sense that involves both the production and detection of weak electric fields, an appropriate sense for fishes that are nocturnally active and typically occur in turbid waters. The electrical sense is used to localize objects and is also important during social interactions; analysis of electric organ discharges suggests that many cryptic species exist that are only separable on the basis of the wave patterns of their electric discharges (e.g., Arnegard & Hopkins 2003). Mormyrids have the largest cerebellum of any fish and a brain size : body weight ratio comparable to that of humans; the mormyrocerebellum is the neural center for coordinating electrical input. Mormyrids have a large learning capacity and are reported to engage in play behavior, a rarity among fishes, although not as unusual as might be expected (Burghardt 2005). Mormyrids are also important food fishes in Africa, with some attaining a length of 1.5 m.

The Asian Arawana or Golden Dragonfish, Scleropages formosus. Overcollecting for the aquarium trade pushed this species to the brink of extinction, desirable color morphs fetching up to $5000.