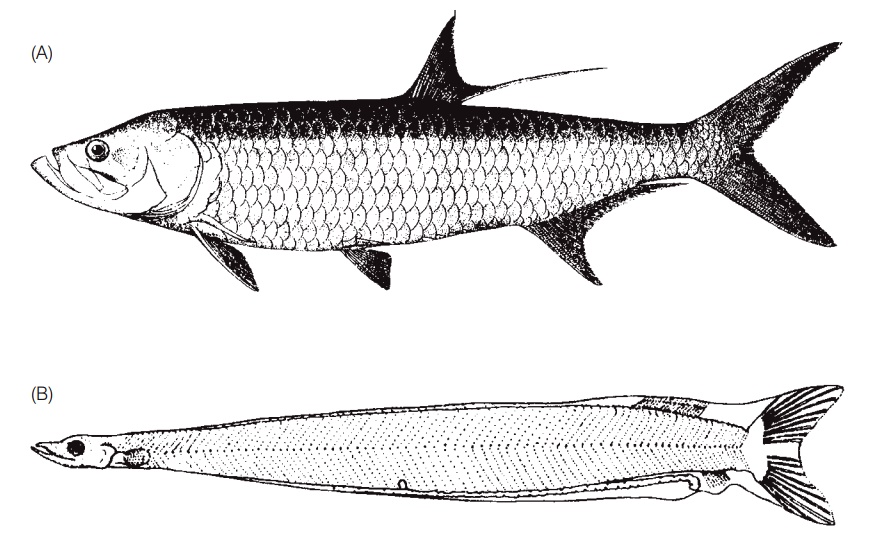 A distinct pelagic larval form, termed a leptocephalus (“pointed head”), unites this speciose marine group (Fig. 14.4). Leptocephali are typically willowleaf- or ribbonshaped and many of them shrink during metamorphosis to the juvenile form. For many years, the link between larval and adult species was not made and hence the two life history stages were placed in very different taxa (see  Larval morphology and taxonomy). The leptocephali of elopiform tarpons and bonefishes have a forked tail, whereas eel larvae have a pointed tail. Leptocephali are exceedingly long-lived, remaining as larvae for as long as 2–3 years in some anguillid species (see  Catadromy). During this time, they are dispersed by currents over large oceanic expanses, feeding perhaps on dissolved organic matter that they absorb through their skin or feeding on gelatinous zooplankton (e.g., Mochioka & Iwamizu 1996). They are thin and fragile in appearance, this effect heightened by a lack of red blood cells, which makes them translucent. 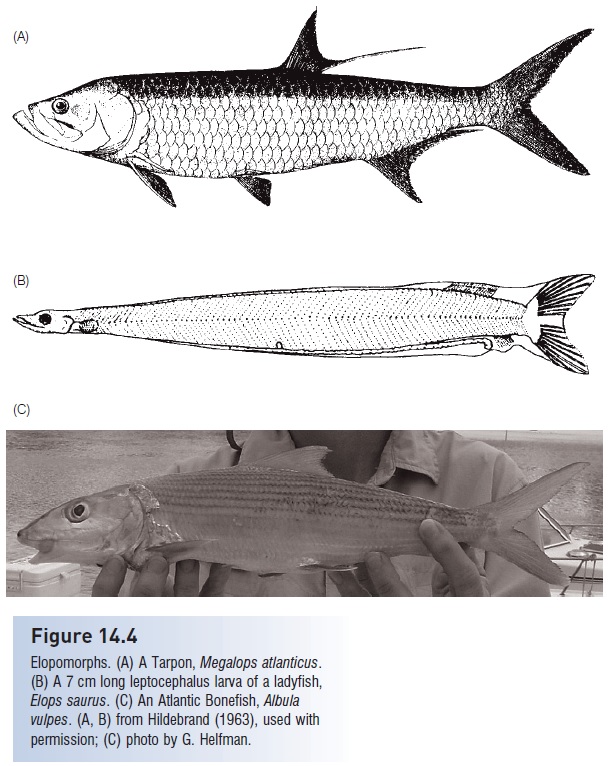 Elopomorphs. (A) A Tarpon, Megalops atlanticus. (B) A 7 cm long leptocephalus larva of a ladyfish, Elops saurus. (C) An Atlantic Bonefish, Albula vulpes. (A, B) from Hildebrand (1963), used with permission; (C) photo by G. Helfman.

Elopomorphs are also distinguished by a reduction in the number of uroneural bones in the tail as compared to osteoglossomorphs, and by the development of thin, riblike epipleural intermuscular bones that extend from the vertebral column into the surrounding trunk musculature. These are the small bones in the meat of primitive teleosts (conger eels, herrings, carps, trouts) that make them difficult to filet and eat. Long epipleural and epineural ribs become less common in higher teleosts such as paracanthopterygians and acanthopterygians, which rely more on stouter, more fi rmly attached zygapophyses. These differences make both cleaning and eating easier.

The elopiform ladyfishes and tarpons retain a primitive characteristic, namely a gular bone or splint on the underside of the throat; this structure is well developed in the more primitive Bowfin, coelacanths, and bichirs but is lost in all other teleosts (except perhaps for an anabantoid, the Pikehead). Other justifi cations for considering elopiform as primitive teleosts include: (i) a large number of branchiostegal rays in the throat (10–35 vs. 5–7 in many higher teleosts); (ii) inclusion of the maxilla in the gape, giving them two biting bones in the upper jaw rather than one; and (iii) heavy, bony scales that contain ganoin, a bone layer otherwise only found in gars and bichirs. The Atlantic Tarpon, Megalops atlanticus, is a legendary gamefish that reaches a length of 2.5 m and a mass of 150 kg. A large (65 kg) female may contain more than 12 million eggs, making tarpon one of the most fecund fishes.

Albuliform bonefishes are also popular gamefishes that occupy sandy flats in shallow tropical waters; recent molecular studies suggest eight or 10 species exist where historically only one was recognized (see  Cryptic evolutionary diversity: the case of the bonefishes). The notacanthoids (halosaurs and spiny eels) are an offshoot suborder between the albuliforms and the anguilliforms; they develop from leptocephalus larvae but otherwise stand in marked anatomical and ecological contrast to other members of the albuliforms. These deepsea, benthic eels occur down to 5000 m, making them among the deepest living fishes known.

The 15 families of anguilliforms are “true” eels, i.e., those with a leptocephalus larva, as distinguished from the approximately 45 other families of “eel-like” fishes that have converged on an elongate body and other anatomical and behavioral traits. An eel-like body facilitates forwards and backwards movement into and out of tight places and soft bottoms. Some anguilliforms are open water, pelagic forms, despite the relatively slow locomotion imposed by an anguilliform swimming mode (see  Locomotory types). Anguilliforms are distinguished by loss of the pelvic girdle and by a modified upper jaw that is formed by fusion of the premaxilla, vomer, and ethmoid bones. The 15 species of anguillid eels are catadromous, spawning at sea but spending most of their lives feeding and growing in fresh water.

Muraenid moray eels and their relatives (185 species) are largely marine, tropical and warm temperate species best known from coral reefs. Their sinister appearance results in part because their sedentary habits require them to hold their fang-studded jaws open while actively pumping water over their gills and out a constricted opercular opening. Although capable of infl icting serious wounds, morays are more dangerous as agents of ciguatera food poisoning, a toxin that originates in a dinofl agellate alga and is magnified in piscivores that eat prey contaminated with the toxin. The congroid eels (491 species) include fossorial (burrowing) forms such as garden eels, worm eels, and snake eels, the latter burrowing into sediments backwards with a hardened, pointed tail. Benthic conger eels are similar ecologically to morays. Other deepsea mesopelagic and bathypelagic congroids include longneck eels, snipe eels, and sawtooth eels. One family of congroids, the

Although often a scavenger, Simenchelys sometimes burrows into the flesh of bottom-living fishes such as halibut. Two 20 cm long individuals were found lodged in the heart of a longline-captured, 500 kg Shortfin Mako Shark, where they had been feeding on blood. Histological features of the inhabited heart suggested that these eels had possibly been living in the shark’s heart prior to its capture, pointing to a truly parasitic relationship (Caira et al. 1997).

The last order of elopomorphs are the truly bizarre saccopharyngiform deepsea gulper and swallower eels and their relatives (see  The deep sea) (Fig. 14.5). These species are distinguished not only by elaborate, extreme specializations of the head and tail, including an extremely long jaw, but also for a lack of features normally found in teleosts. Among the structures missing from different species are the symplectic and opercular bones, branchiostegals, maxilla and premaxilla, vomer and parasphenoid, scales, pelvic or pectoral fins, ribs, pyloric caeca, and gas bladder. Some early authors argued that saccopharyngoids were not really bony fishes. Nelson (1994, p. 115) considered the saccopharyngoids “perhaps the most anatomically modified of all vertebrate species”. Another saccopharyngoid family, the monognathids, contains species with rostral fangs and apparent venom glands, a unique feature among fishes (Bertelsen & Nielsen 1987). 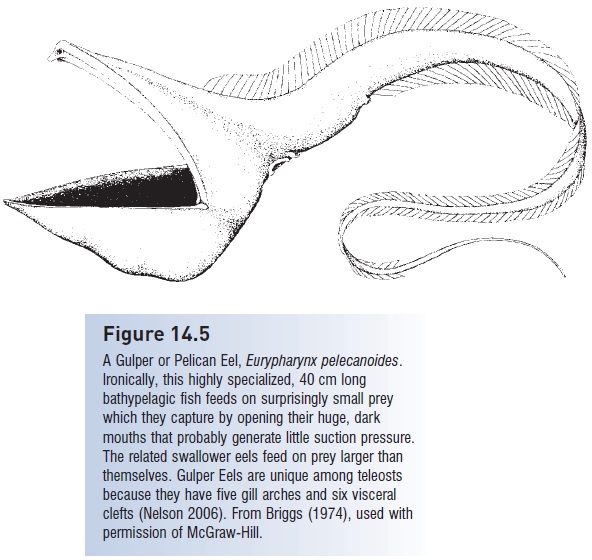 The related swallower eels feed on prey larger than themselves. Gulper Eels are unique among teleosts because they have five gill arches and six visceral clefts (Nelson 2006). From Briggs (1974), used with permission of McGraw-Hill..