Subcutaneous mycoses: These are infections of the dermis,subcutaneous tissue, muscle, and fascia. 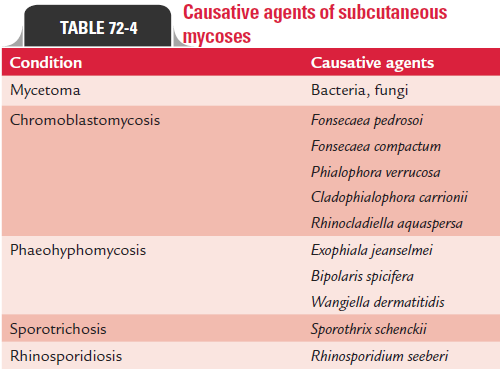 Mycetoma is a slowly progressive, chronic granulomatous infection of skin and subcutaneous tissues with occasional involvement of underlying fascia and bone usually affect-ing extremities. The condition is characterized by a triad of (a) tumefaction, (b) draining sinuses, and (c) grains or granules.

The condition was described as early as in Atharva-Veda: padmavalmikam means anthill foot. John Gill first described thecondition in Madurai (India) in 1842. Colebrook confirmed it in 1846. Henry Vandyke Carter, a professor at Grants Medical College, Mumbai, coined the term mycetoma in 1874. Chalmer and Christopherson coined the term maduramycosis in 1916.

Mycetoma is caused by a number of actinomycetes and filamentous fungi that enter through penetrating injuries resulting from thorn pricks, splinters, etc (Table 72-5). Lower extremities are most commonly involved. Microabscesses are formed in subcutaneous tissues surrounded by polymor-phonuclear inflammatory reaction. The center of the lesion consists of tangled filaments of these organisms. 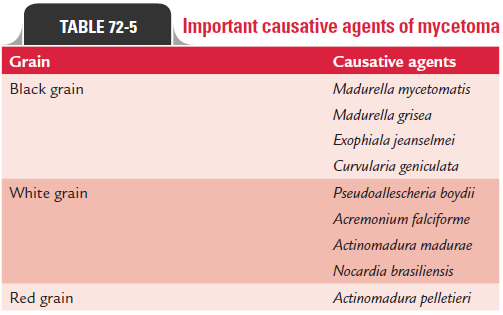 During the course of infection, microabscesses burst open with the formation of chronic multiple sinuses discharging copi-ous, seropurulent fluid containing granules. The color and con-sistency of these granules vary depending on the fungi that cause the disease (Table 72-5). The condition is characterized by forma-tion of painless, localized, swollen lesions on the affected limbs. Multiple discharging sinuses are present. Discharge is purulent, mucopurulent, or serosanguinous and usually contains granules of varying size, color, and consistency. Fascia and bone may be affected but underlying tendons and nerves are never affected.

The condition during period of time spreads slowly, but over years by contiguity. Sometimes the infection becomes extensive by involving buttock and trunk. Actinomycetes spread faster than eumycetes. Hematogenous spread is rare.

Mycetoma is documented worldwide but is common in tropical and subtropical countries. Actinomycetoma accounts nearly for 65% of mycetomas and for 35% of eumycetoma in India. Actinomadura madurae is the major causative agent. Streptomyces somaliensis infection is seen more frequently ineastern India. The condition is more common in rural areas and in males (3.5:1) than females. It affects mostly highly active persons aged 20–40 years. It is an occupational hazard affect-ing farmers, herdsmen, carpenters, builders, land workers, field workers, etc.

Chromoblastomycosis is a slowly progressing granulomatous infection caused by several soil fungi. These are Fonsecaea pedro- soi, Fonsecaea compactum, Cladosporium carrionii, and Phialophora verrucosa. These fungi are collectively called dematiaceous fungi because they have brown to black melanin pigment in their cell wall, and their conidia or hyphae are dark colored, either gray or black. All the fungi causing chromoblastomycosis appear morphologically similar in tissues stained by hematoxylin and eosin (H and E) or other stains.

The infection occurs following introduction of any of the dematiaceous fungi into the skin through trauma. The development of warty nodules that appear at site of inocula-tion characterizes chromoblastomycosis. During the course of infection, these lesions vegetate and develop to a cauliflower-like lesion. The disease is more common in tropical and subtropical countries.

Diagnosis of phaeohyphomycosis is made by demonstra- tion of darkly pigmented, septate hyphae measuring 5–10 mm diameter in tissues. The drug of choice for treatment of chromoblastomycosis is 5-fluorocytosine. Cautery and surgical removal of early lesion is also useful.

Sporotrichosis is a chronic pyogenic granulomatous lesion of the skin and subcutaneous tissue caused by Sporothrix schenckii. S. schenckii is a dimorphic fungus found all over the world. Thefungus is found in soil, decaying woods, thorns, and on infected animals including rats, cats, dogs, and horses.

Spore is the infective stage of the fungus. It causes infection primarily on the hand or the forearm through direct contact of the skin by spores. Typically, infection is introduced in skin through a penetration of thorn. At the site of thorn injury, it causes a local pustule or ulcer with the nodules along the drain-ing lymphatics. Frequently, the regional lymph nodes draining the ulcer enlarge, suppurate, and ulcerate.

The primary lesion may remain localized or in the immu-nocompromised individuals may disseminate to involve the bones, joints, lung, and rarely the central nervous system.

In infected tissue, the yeast appears as round, oval, or cigar-shaped cells with irregular borders. Periodic acid-Schiff (PAS) or Gomori’s methenamine silver (GMS) stain is useful to demonstrate these structures in the stained smears. The fungus on SDA at 25°C produces black and shiny colonies, which become wrinkled and foggy during course of time. The mold contains hyphae bear-ing flower-like structures of small conidia on delicate sterigmata.

Laboratory diagnosis of sporotrichosis is made by demon-stration of asteroid bodies in pus of the abscesses. Asteroid bodies consist of a central basophilic budding yeast cell with eosinophilic material, which radiates from the center.

Itraconazole is the drug of choice for treatment of the condition.

Rhinosporidiosis is a chronic granulomatous disease caused by Rhinosporidium seeberi. More than 90% of cases are reported from India, Sri Lanka, and South America. The cases have been reported from throughout India. The endemic foci of infection

have been reported from Tamil Nadu, Andhra Pradesh, Kerala, and Madhya Pradesh.

R. seeberi cannot be cultured in cell-free artificial media.Animal inoculation is also not successful. The mode of infection of this fungus is not known. However, it is suggested that it is transmitted in dust and water. Fish is believed to be the nat-ural host of this fungus. Infection is seen most commonly in persons taking bath in stagnant pools and in individuals who dive in streams to collect sand from river beds.

The disease is characterized by the development of large friable polyps or wart-like lesion in the nose, conjunctiva, or eye. The lesion is also occasionally seen in ears, larynx, bron-chus, urethra, vagina, rectum, and skin.

Treatment of the condition is carried out by surgery or cauterization. Chemotherapy with dapsone is also useful. 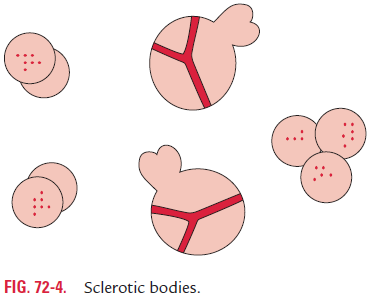 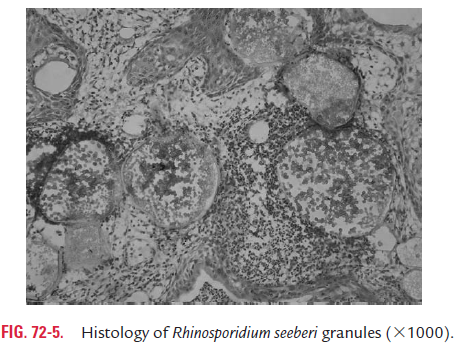