Cutaneous mycoses: These are infections of the skin involv-ing the epidermis and its integuments, the hair, and nails.

The most important dermatophytes that cause infection in humans are classified into the following three genera:

a)        Trichophyton—causes infection of hair, skin, and nail.

b)       Microsporum—causes infection of hair and skin.

The dermatophytes on the basis of their natural habitat and host preferences can be classified into following groups:

b)       Zoophilic species: These are the dermatophytes that liveon animals and often cause infection in their animal host. These zoophilic species are transmitted from infected ani-mals to humans by direct and indirect contacts with domes-tic animals (e.g., cat and dog) and occasionally wild animals. Examples are Trichophyton violaceum and Microsporum canis. 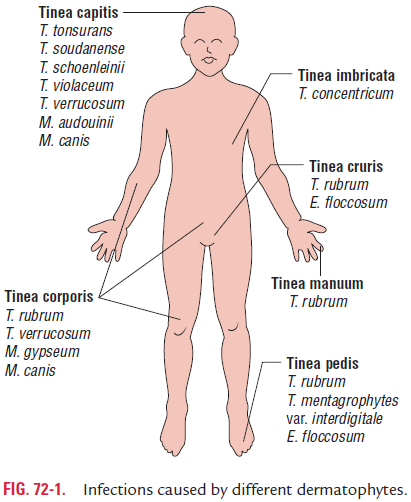 c)        Geophilic species: These are saprophytic fungi found insoil or in dead organic substances. They occasionally cause infection in humans and animals. Examples are Microspo-rum gypseum and Trichophyton ajelloi. Dermatophytes usuallygrow only on keratinized skin and its appendages, and do not penetrate the living tissues. In some infected persons, hypersensitivity to fungus antigen may cause secondary eruptions, such as vesicles on the finger. This reaction is known as dermatophytid (id) reaction. This reaction occurs as a result of hypersensitivity response to circulating fungal antigen, and these lesions do not contain any fungal hyphae.

Asexual state of selected dermatophytes is mentioned in Table 72-2. 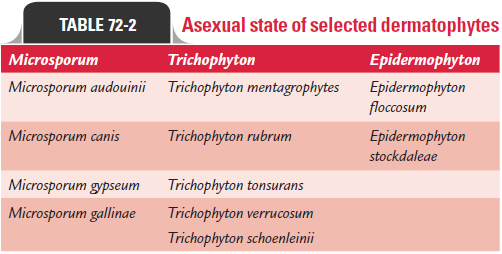 The skin infections caused by dermatophytes are chronic infections of the skin often found in the warm humid areas of the body, such as athlete’s foot and jock itch. Typical ringworm lesions are circular, which have an inflamed border contain-ing papules and vesicles surrounding a clear area of relatively normal skin. These lesions are associated with variable degrees of scaling and inflammation. Broken hair and thickened broken nails are often seen in this lesion.

Clinically, ringworm can be classified depending on the site affected. These are (a) Tinea capitis involving scalp, (b) Tineacorporis involving nonhairy skin of the body, (c) Tinea cruris affecting groin, (d) Tinea pedis affecting foot, and (e) Tinea barbae affecting beard areas of face and neck.

Laboratory diagnosis is based on demonstration of fungal element in clinical specimen by microscopy and confirmation by culture. The specimens include skin scrapings and nail clip-pings or hair taken from the areas suspected to be infected by dermatophytes. These entire specimens are treated with alkali solution to clear epithelial cells and other debris. Direct micros-copy is useful only for diagnosis, while culture is always carried out to identify the specific causative fungal agent.

Examination of 10% direct KOH mount may show fungal hyphae. Three types of hair infections can be demonstrated in microscopy of 10% KOH wet mount as follows (Fig. 72-2): 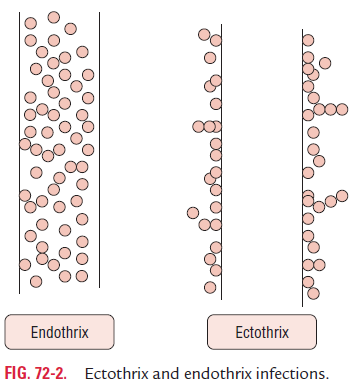 Favus: In favus, there is sparse hyphal growth and formationof air spaces within hair shaft. It is caused by T. violaceum, T. schoenleinii, and M. gypseum.

The clinical specimens are cultured by inoculation on SDA containing antibiotics like cycloheximide. The media after inoculation are incubated at 25–30°C for 3 weeks. At 25°C most of the pathogenic fungi grow well, while saprophytic fungi and bacteria are inhibited.

This test is performed to differenti-ate T. rubrum from T. mentagrophytes. The test is also used to differentiate M. canis from Microsporum equinus.This test is per-formed by collecting 5–10 mm short shaft of human hair and placing it in a Petri dish with 20 mL of distilled water. Then, two to three drops of 10% sterile yeast extract is added to the Petri 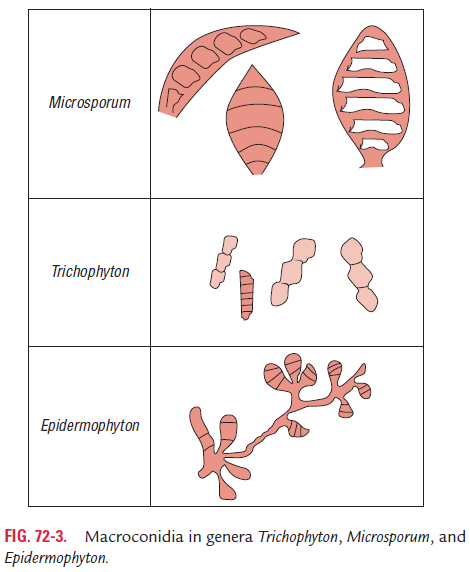 dish with hair shafts. These hair shafts are inoculated with test fungus cultured on SDA. The culture is incubated at 25°C for up to 1 month, during which the hairs are removed and LPCB mount of the hair is examined microscopically at weekly inter-vals for the demonstration of the perforation of hair.

T. mentagrophytes (Color Photo 62) shows a positive hairperforation test characterized by a wedge-shaped perforation of the hair. This test is negative for T. rubrum in which only surface eruption of hair shaft is demonstrated.

Urease test: Urease test is carried out to differentiateT. men-tagrophytes from T. rubrum. This test is performed by inocu-lating a tube of Christensen’s medium with the fungus and incubating at 25°C for 5 days at room temperature. Most T.mentagrophytes are urease positive within 5 days.

Growth on rice grains: This test is useful to differentiateM. canis from M. audouinii. In this test, sterile, nonfortified riceis inoculated with the hyphae of the fungi to be tested. The medium is observed for growth after 10 days of incubation at room temperature. M. canis usually grows well and forms many conidia on rice grain, whereas M. audouinii fails to grow.

Treatment of dermatophyte infection is carried out by use of local antifungal drugs, such as miconazole, clotrimazole, econazole, etc., or by treatment orally with griseofulvin.