The first Enhanced ER (EER) model concept we take up is that of a subtype or subclass of an entity type.

The EER model includes all the modeling concepts of the ER model that were presented in Chapter 7. In addition, it includes the concepts of subclass and superclass and the related concepts of specialization and generalization (see Sections 8.2 and 8.3). Another concept included in the EER model is that of a category or union type (see Section 8.4), which is used to represent a collection of objects (entities) that is the union of objects of different entity types. Associated with these concepts is the important mechanism of attribute and relationship inheritance. Unfortunately, no standard terminology exists for these concepts, so we use the most common terminology. Alternative terminology is given in foot-notes. We also describe a diagrammatic technique for displaying these concepts when they arise in an EER schema. We call the resulting schema diagrams enhanced ER or EER diagrams.

The first Enhanced ER (EER) model concept we take up is that of a subtype or subclass of an entity type. As we discussed in Chapter 7, an entity type is used to represent both a type of entity and the entity set or collection of entities of that type that exist in the database. For example, the entity type EMPLOYEE describes the type (that is, the attributes and relationships) of each employee entity, and also refers to the current set of EMPLOYEE entities in the COMPANY database. In many cases an entity type has numerous subgroupings or subtypes of its entities that are meaning-ful and need to be represented explicitly because of their significance to the database application. For example, the entities that are members of the EMPLOYEE entity type may be distinguished further into SECRETARY, ENGINEER, MANAGER, 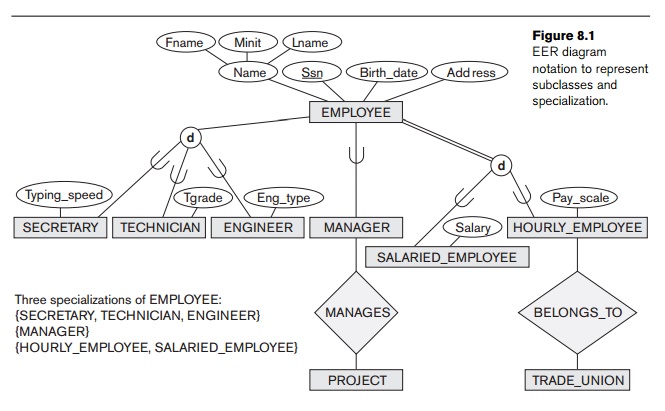 An entity cannot exist in the database merely by being a member of a subclass; it must also be a member of the superclass. Such an entity can be included optionally as a member of any number of subclasses. For example, a salaried employee who is also an engineer belongs to the two subclasses ENGINEER and SALARIED_EMPLOYEE of the EMPLOYEE entity type. However, it is not necessary that every entity in a superclass is a member of some subclass.