Constraints and Characteristics of Specialization and Generalization Hierarchies

Constraints and Characteristics of Specialization and Generalization Hierarchies

1. Constraints on Specialization and Generalization

In some specializations we can determine exactly the entities that will become members of each subclass by placing a condition on the value of some attribute of the superclass. Such subclasses are called predicate-defined (or condition-defined) subclasses. For example, if the EMPLOYEE entity type has an attribute Job_type, as shown in Figure 8.4, we can specify the condition of membership in the SECRETARY subclass by the condition (Job_type = ‘Secretary’), which we call the defining predicate of the subclass. This condition is a constraint specifying that exactly those entities of the EMPLOYEE entity type whose attribute value for Job_type is ‘Secretary’ belong to the subclass. We display a predicate-defined subclass by writing the predicate condition next to the line that connects the subclass to the specialization circle.

The second constraint on specialization is called the completeness (or totalness) constraint, which may be total or partial. A total specialization constraint specifies that every entity in the superclass must be a member of at least one subclass in the specialization. For example, if every EMPLOYEE must be either an

Notice that the disjointness and completeness constraints are independent. Hence, we have the following four possible constraints on specialization:

Of course, the correct constraint is determined from the real-world meaning that applies to each specialization. In general, a superclass that was identified through the generalization process usually is total, because the superclass is derived from the subclasses and hence contains only the entities that are in the subclasses.

Certain insertion and deletion rules apply to specialization (and generalization) as a consequence of the constraints specified earlier. Some of these rules are as follows:

Deleting an entity from a superclass implies that it is automatically deleted from all the subclasses to which it belongs.

Inserting an entity in a superclass implies that the entity is mandatorily inserted in all predicate-defined (or attribute-defined) subclasses for which the entity satisfies the defining predicate.

Inserting an entity in a superclass of a total specialization implies that the entity is mandatorily inserted in at least one of the subclasses of the specialization.

The reader is encouraged to make a complete list of rules for insertions and dele-tions for the various types of specializations.

2. Specialization and Generalization Hierarchies and Lattices

A subclass itself may have further subclasses specified on it, forming a hierarchy or a lattice of specializations. For example, in Figure 8.6 ENGINEER is a subclass of EMPLOYEE and is also a superclass of ENGINEERING_MANAGER; this represents the real-world constraint that every engineering manager is required to be an engineer. A specialization hierarchy has the constraint that every subclass participates as a subclass in only one class/subclass relationship; that is, each subclass has only

one parent, which results in a tree structure or strict hierarchy. In contrast, for a specialization lattice, a subclass can be a subclass in more than one class/subclass relationship. Hence, Figure 8.6 is a lattice.

Figure 8.7 shows another specialization lattice of more than one level. This may be part of a conceptual schema for a UNIVERSITY database. Notice that this arrange-ment would have been a hierarchy except for the STUDENT_ASSISTANT subclass, which is a subclass in two distinct class/subclass relationships.

The requirements for the part of the UNIVERSITY database shown in Figure 8.7 are the following:

The database keeps track of three types of persons: employees, alumni, and students. A person can belong to one, two, or all three of these types. Each person has a name, SSN, sex, address, and birth date.

Every employee has a salary, and there are three types of employees: faculty, staff, and student assistants. Each employee belongs to exactly one of these types. For each alumnus, a record of the degree or degrees that he or she 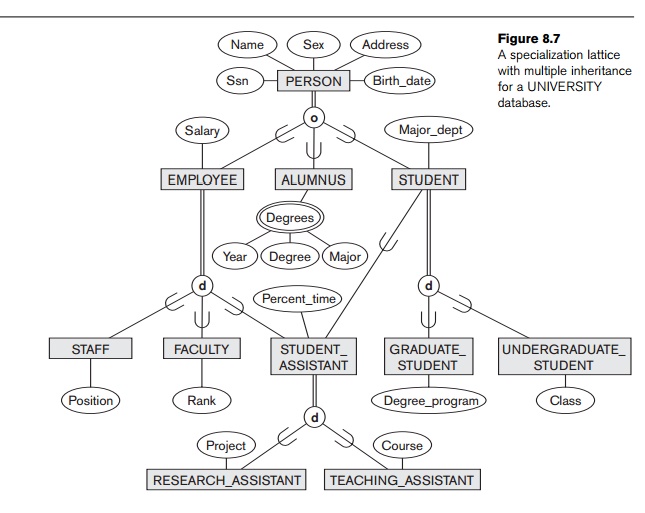 Students are further classified as either graduate or undergraduate, with the specific attributes degree program (M.S., Ph.D., M.B.A., and so on) for graduate students and class (freshman, sophomore, and so on) for under-graduates.

In such a specialization lattice or hierarchy, a subclass inherits the attributes not only of its direct superclass, but also of all its predecessor superclasses all the way to the root of the hierarchy or lattice if necessary. For example, an entity in GRADUATE_STUDENT inherits all the attributes of that entity as a STUDENT and as a PERSON. Notice that an entity may exist in several leaf nodes of the hierarchy, where a leaf node is a class that has no subclasses of its own. For example, a member of GRADUATE_STUDENT may also be a member of RESEARCH_ASSISTANT.

It is important to note here that some models and languages are limited to single inheritance and do not allow multiple inheritance (shared subclasses). It is also important to note that some models do not allow an entity to have multiple types, and hence an entity can be a member of only one leaf class.8 In such a model, it is necessary to create additional subclasses as leaf nodes to cover all possible combina-tions of classes that may have some entity that belongs to all these classes simultane-ously. For example, in the overlapping specialization of PERSON into {EMPLOYEE, ALUMNUS, STUDENT} (or {E, A, S} for short), it would be necessary to create seven subclasses of PERSON in order to cover all possible types of entities: E, A, S, E_A, E_S, A_S, and E_A_S. Obviously, this can lead to extra complexity.

Although we have used specialization to illustrate our discussion, similar concepts apply equally to generalization, as we mentioned at the beginning of this section. Hence, we can also speak of generalization hierarchies and generalization lattices.

It is possible to arrive at the same hierarchy or lattice from the other direction. In such a case, the process involves generalization rather than specialization and corresponds to a bottom-up conceptual synthesis. For example, the database designers may first discover entity types such as STAFF, FACULTY, ALUMNUS,

In structural terms, hierarchies or lattices resulting from either process may be identical; the only difference relates to the manner or order in which the schema super-classes and subclasses were created during the design process. In practice, it is likely that neither the generalization process nor the specialization process is followed strictly, but that a combination of the two processes is employed. New classes are continually incorporated into a hierarchy or lattice as they become apparent to users and designers. Notice that the notion of representing data and knowledge by using superclass/subclass hierarchies and lattices is quite common in knowledge-based systems and expert systems, which combine database technology with artificial intelligence techniques. For example, frame-based knowledge representation schemes closely resemble class hierarchies. Specialization is also common in software engineering design methodologies that are based on the object-oriented paradigm.